Is the Importance of Being Earnest a Satirical Play?

With the definition of a satire being, ‘the use of humour, irony, exaggeration, or ridicule to expose and criticize people’s stupidity’, it is ludicrous to even propose that The Importance of Being Earnest is anything other than a satirical play, as the characters relishing in the upper class of the Victorian period unknowingly mock their own habits acquired to them due to the luxury they are spoilt with. Despite this, it is evident that the use of satire is feckless and lacks a moral point of view, in contrast with the moral point expressed through satire in other Victorian plays such as Mrs Warren’s Profession, which ‘exposes the corruption and hypocrisy of the ‘‘genteel’’ class’.

Don't use plagiarized sources. Get your custom essay on
“ Is the Importance of Being Earnest a Satirical Play? ”
Get custom paper
NEW! smart matching with writer

Ergo, we acknowledge that the play is an ‘invention of a truly serious work of triviality has neither ancestors nor descendants’ and was unique to its genre at that period of time, yet the frivolousness of the plot results in ‘the audience freely and genuinely laughs without quite being sure what it is laughing at’ – hence The Importance of Being Earnest is indisputably satirical, but a satire that has lost its sting.

Lady Bracknell’s view of marriage is expressed through her account of visiting Lady Harbury, ‘I hadn’t been there since her poor husband’s death. I never saw a woman so altered; she looks quite twenty years younger’; she implies marriage is a burden and that life is only regained once freedom from marriage is embraced. Such opinions are heavily satirical and ironic as Lady Bracknell is herself married, and so by praising the widower she mocks herself.

It is evident from this that Wilde is ridiculing the epitomes of the upper class and their absurd attitudes to marriage, however the ‘ridiculousness of portrayed by Wilde in the play, especially when the arranged marriage idea is summed up by Lady Bracknell, ‘An engagement should come on a young girl as a surprise, pleasant or unpleasant as the case may be’’ illustrates how deficit the satire is of a moral point of view, as Lady Bracknell continues to protest that Gwendolen will proceed with an arranged marriage despite the cruelness of her intentions.

‘The women are portrayed as sheltered, uneducated, and some as dominating figures over the men in their lives’ Jamie Crawford’s interpretation of the role of women in The Importance of Being Earnest alludes that the behaviour of the female characters is exceedingly antipodal to what would be expected in the Victorian era, ‘A wife’s duties to tend to her husband were considered crucial cornerstones of social stability by the Victorians’. There is strength to this argument as conveyed by Cecily’s language when addressing Algernon, ‘‘Oh don’t cough Earnest. When one is dictating one should speak fluently and not cough. Besides, I don’t know how to spell a cough”. The juxtaposition of Cecily instructing Algernon in order to appear domineering “Oh don’t cough Earnest” and her rebellion against receiving an education “I don’t know how to spell a cough” elaborates the unorthodox nature of the female characters Wilde has incorporated. Thereupon, Wilde’s portrayal of the relationships between men and women in The Importance of Being Earnest is majorly satirical of the conventional, as by reversing the roles of authority it derides the power men traditionally uphold over women. On the contrary, Robert J. Jordan implies Wilde’s use of satire when illustrating social differences between men and women has ‘lost it’s sting’ as the question suggests, by reason of ‘even if this satiric device is structural in the play it can hardly be a satire of great power, as the attitudes to women were modernising significantly at the period the play was written’. Consequently we observe Wilde’s failing in presenting a satirical view of women’s role in Victorian society – he was simply delineating the changes he perceived around him, thus supporting Eduoard Roditi’s interpretation and questioning whether The Importance of Being Earnest belongs to a different genre of comedy. Previous to Wilde’s The Importance of Being Earnest, Victorian comedies consisted mostly of high and low comedy and of ‘dirty or vulgar jokes, dirty gestures, and sex’. Hence, it is possible to suggest that contradictory to Edouard Roditi’s interpretation, the Importance of Being Earnest carries a moral point of view in the fact it does not exploit sex or sexual preferences to effectuate drollery; Wilde provokes laughter through mistaken identities and the consequences of ‘bunburying’ perhaps to allude that his opinions it that sexuality is not a laughing matter. Providing this interpretation is true, it is acceptable to assume that the reasoning behind the negative criticisms the drama received when first written were due to the fact critics felt appalled that a piece of writing could prove successful without it consisting of any sexual nature and hence deemed The Importance of Being Earnest as, ‘dull in comparison to other plays read over the years’.

Howbeit, some critics state that ‘the word “earnest” became a code-word for homosexual, as in: “Is he earnest?”, in the same way that “Is he so?” and “Is he musical?” were also employed’, suggesting that The Importance of Being Earnest is an expression of Wilde’s hatred for marriage and his fondness of homosexuality as he praises the idea of being Earnest’. This undoubtedly contradicts the idea that the drama is unique from other plays of it’s time in the fact it lacks sexual content, and indicates that whilst The Importance of Being Earnest may carry the ‘tone of satire’ as Roditi’s argument suggests, it incontrovertibly is a form of Blue Comedy, as the moral tone traditionally associated with satirical comedy is not present, Wilde is forcing his opinions on the reader without a sufficient moral behind his beliefs. The fact the Importance of Being Earnest consists of 3 acts implies a significant beginning, middle and ending where previous feuds have been resolved and each character is content. If we are to consider the drama as conforming to a ‘traditional’ Victorian play which ‘tended to be of an improving nature with a central moral lesson at heart’, what is evidently untraditional of The Importance of Being Earnest is the rewarding of characters that have committed wrong doings –supporting Edouard Roditi’s interpretation that the drama ‘lacks a moral point of view’. If we analogize The Importance of Being Earnest with An Ideal Husband, we note the significance of the final act of An Ideal Husband in delivering the moral that that the principles of Mabel and Goring’s relationship demand that they defy society and revolt against what is traditionally expected of a marriage in order to achieve happiness, a final act which The Importance of Being Earnest lacks. Accordingly, it was perhaps Wilde’s intention to ensure that The Importance of Being Earnest was unique by refusing to incorporate morality in order to suggest that ‘true virtue is either dead, or is confined to the lower classes’, as supported by Algernon’s satirical comment, “They seem, as a class, to have absolutely no sense of moral responsibility”. The relationship between Algernon and his servant Lane is a further example of Wilde dismantling social norms by ridiculing potent characters in their own domiciles. Lane ignorantly mimics Algernon when they are discussing marriage, as despite Algernon’s evident refusal to discuss the matter Lane continues to revive the conversation, “Is marriage so demoralizing?…I have only been married once…

I don’t know that I’m interested in your family life.. No, Sir. It is not a very interesting subject”, a witty satire of the traditional relationship of servant and master. Nevertheless the idea that satire throughout The Importance of Being Earnest has effectively ‘lost it’s sting’ is still prevalent in the persiflage of Algernon and Lane, as Algernon is a character that severely lacks depth; he is regularly mentioned as eating in the drama, “Eating as usual I see, Algy!” which infers that he yearns for something to fill a chimerical emptiness, possibly the lack of permanent company in his life as supported by Adam Ruhland’s interpretation, ‘Algernon’s readiness to lie about his food consumption reveals that he is well aware that he eats other people’s food when he feels cornered, stressed, or sad’. The fact Algernon is ‘well aware’ of his reliance on food to provide comfort delineates his ignorant attitude towards love and marriage. It is Lane’s willingness to provide Algernon with food that brings about the lack of a moral point of view to their satirical relationship and supports Edouard Roditi’s interpretation, as he is perceptive and observes Algernon’s piteous behaviour yet refuses to encourage a change in him. ‘The Importance of Being Earnest is above all an exercise in wit. There is nothing to be learned from it, no moral, no message’ defines Wilde’s play perfectly; it is a pointless facade that attempts to provide a satirical view of Victorian society, yet due to the willingness of characters to obey the restrictions accompanied with belonging to the upper class, fails miserably. Characters such as Miss Prism and Chasuble suggest the existence of another life beneath Victorian correctness through their flirtatious mannerisms, “I shall see you both no doubt at Evensong?” yet their refusal to further their relationship due to evident class differences, “I think, dear Doctor” depicts how Wilde’s satirical element has most definitely ‘lost its sting due to lack of moral point of view’; as the characters adhere to the conventions mocked by the satire, diminishing its efficacity.

Is the Importance of Being Earnest a Satirical Play?. (2016, Apr 02). Retrieved from https://studymoose.com/is-the-importance-of-being-earnest-a-satirical-play-essay 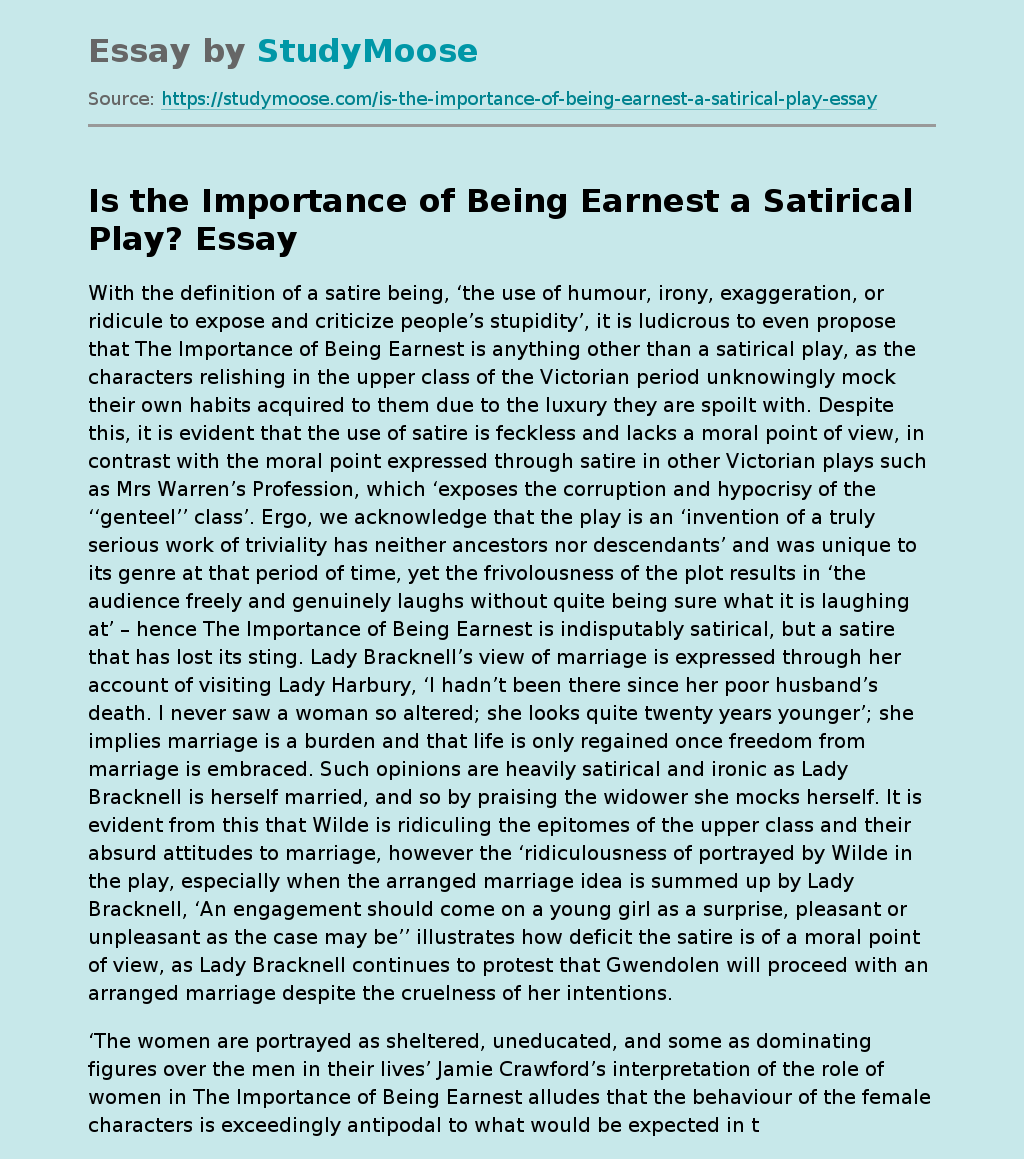