Is the generation gap myth or reality

It’s well known that new time demands new way of thinking. New way of thinking demands new way of acting. New way of acting arouses misunderstanding on the part of older generation. People usually get used to certain things and some dead small changes can frighten them. Thus, trying to avoid the negative feeling of fear older people try to avoid new trends and spirits of the time. On the other hand, youngsters are eager to introduce some desperately new and young-eyed decisions in order to gain a foothold.

Don't use plagiarized sources. Get your custom essay on
“ Is the generation gap myth or reality ”
Get custom paper
NEW! smart matching with writer

In other words, young people want to be creative, bright and want to place themselves on record.

As a result, old traditions contradict with new trends and a problem of generation gap shapes up. For example, parents very often try to protect their children from modern entertainments some forbid playing computer games, thinking that computers can’t teach anything to their children, some prohibit wearing extravagant clothes and some prevent their infants from attending concerts of rock stars, fearing that he can fall among evil companions.

However, forbidden fruit is sweet. And the offsprings start doing everything on the sly. But when finally parents find it out they can’t stop wondering why do their children conceal their affairs from them? The answer is as easy as ABC: youngsters want to express themselves, they want to get the smell of powder, they want to enjoy independence. On the contrary, the parents want to be sure that their precious offsprings are safe and sound.

As a consequence, this leads to misunderstanding, quarrels and insults.

Nowadays children start using computers very early. Tweens and teens are so fascinated by them that they spend hours and hours at their personal computers or at computer clubs. The electronic universe replaces their contacts with friends and dominates their life completely. Obsession with computers brings about a mechanical, disillusioned mentality and inhibits their emotional development. The heads of youngsters are also being filled with violent pictures they have seen on TV. Children are very naive and impressionable. And no wonder that they are so aggressive and arrogant in real life. They are thrown into such a harsh world, especially if they live in a city.

There is no way to predict how today’s children will turn out. Keeping faith in kids is necessary. They are not bad. They are optimistic. They expect to have a better life than their parents’. And grown-ups – if they are prepared to admit it – could learn a thing or two from their children. One of the biggest lessons they could learn is that enjoyment is not «sinful». Enjoyment, is a principle you could apply to all aspects of life. It is not wrong to enjoy your work and enjoy your leisure, to shed restricting inhibitions. It is surely not wrong to live in the present rather than in the past or future.

Generation gap is the major reason today why parents and children are moving away from each other. As we all know, the environment has changed, so has the life style and with that changes the mind of children. Today’s generation doesn’t like others interfering in any of their personal matters, they don’t like parents ordering them, and if they try and tell them what’s wrong for them, they misbehave with their parents. The question arises that, what is the reason behind all this. It is the parents’ mistake or is it cause of the generation gap. Generation gap is basically created by the people themselves. They don’t talk to their children and share their own points of views with the children. The point is that the parents are just so busy with their work and jobs that they don’t have time for their family and their children. And they realize it when there has a huge distance between the kids and the parents.

The point is if parents give their children some time from their busy schedule then there would be no such problem. Nevertheless the problem of generation gap can be easily solved. Patience should be the key to the common ground between adults and youngsters. People of all ages must become more tolerant and less selfish and must discuss their troubles in order to conquer misunderstanding. It’s essential that parents give more freedom to their children so that they can express themselves. Whereas children should remember that freedom is not something to be over-indulged in. It’s not difficult to achieve understanding if you are making effort to see a problem from a variety of angles. On the contrary, if you think that your standpoint is the only one true and you don’t want to discuss and listen to other opinions, then the problem of generation gap will become a nightmare of your family.

Examples of generation gap issues in Romeo and Juliet

One of the most defining themes in Romeo and Juliet is that of the Generation Gap between characters. This theme builds the storyline creating the numerous misunderstandings throughout the play and a satisfying conclusion.

Characters can be divided into two categories. The elder characters (Less eager to fight, believe life is short and marry for status) and the Youth (Have dreams, believe in love and act on impulse.) It is because of this division that the elder characters make decisions the youth rebel against because they feel they cannot talk to the elders, as they do not understand.

This can be seen between Tybalt and Capulet whereby Tybalt wants to fight Romeo for gate crashing and Capulet refuses as he has planned the party to be a courtship period for Paris and Juliet. Tybalt swears his revenge, which later results in his and Mercutios death. Had Tybalt understood Capulet’s reasoning and had Capulet explained himself fully, Tybalt would not have died. This would mean that the next misunderstanding between Capulet and Juliet would not have occurred, whereby Juliet’s marriage to Paris is arranged to make her happy as they think she is sad due to Tybalts death. Juliet’s refusal to marry Paris is seen as disobedience.

The fact that Capulet will not listen to Juliet and that she cannot talk about her marriage to Romeo is the initial reason Juliet fakes her death and later kills herself. However had Romeo and Juliet not been so hasty their end would not have been fatal. Romeo was too quick to assume Juliet’s death, had he waited they could have run away. Also Tybalt and Romeo where to quick to fight, had they been peaceful the wedding of Paris to Juliet would not have been moved forward giving Juliet and Romeo more time to confess their love and marriage.

It was due to the generation gap that Romeo and Juliet amongst others died and the family finally united in peace. However had the gap not existed would the families have united?

Is the generation gap myth or reality. (2016, Apr 03). Retrieved from http://studymoose.com/is-the-generation-gap-myth-or-reality-essay 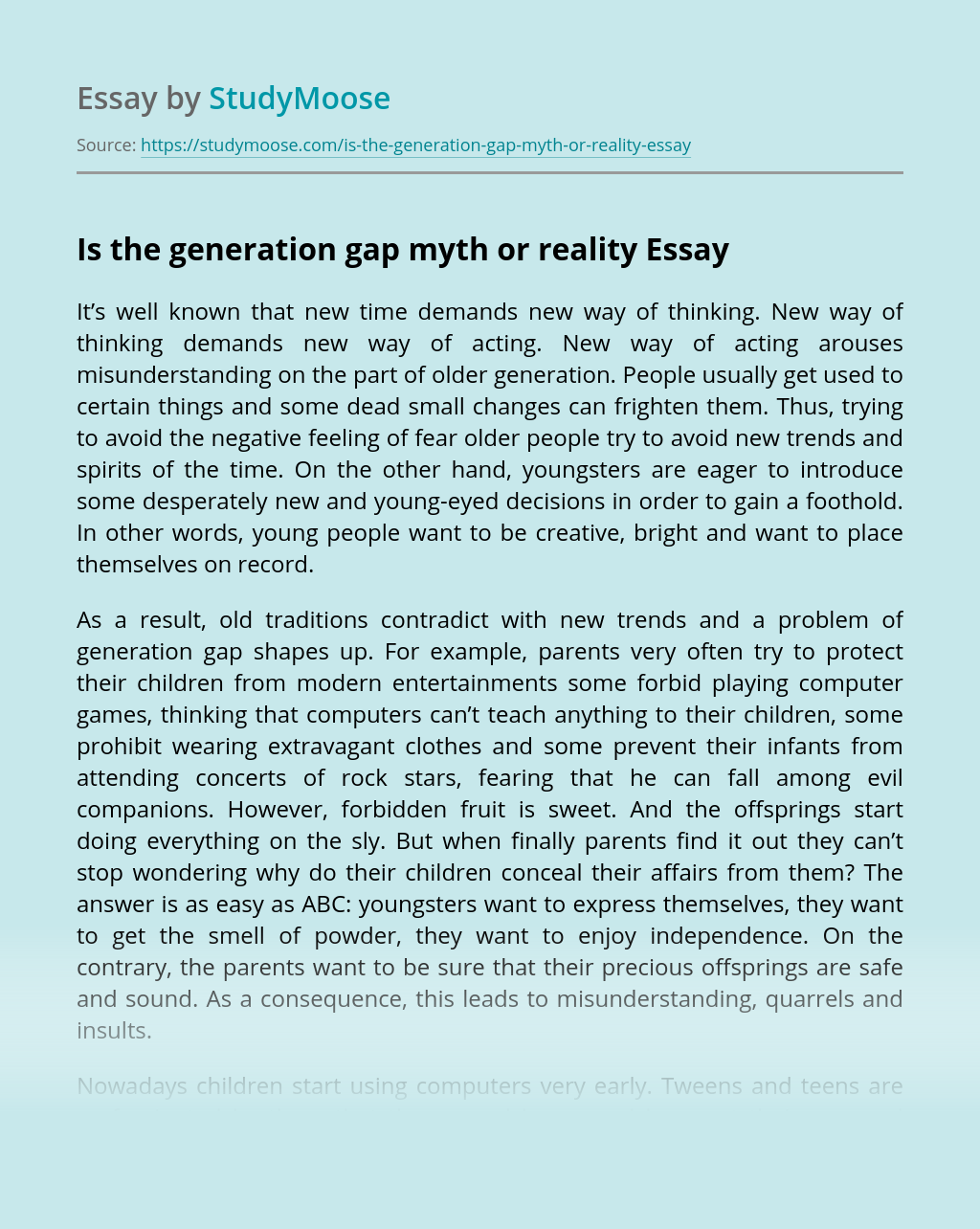