Is Sixteen Old Enough to Drive

Ever since the invention of the automobile people have been asking the same question; how old is old enough to drive? Utah, like many other states in the U.S., has set the legal driving age to sixteen. Many people wonder is sixteen really old enough to get behind the wheel or should we postpone this privilege until they are eighteen? There are two sides to every argument however, and I believe that a sixteen year old has enough sense to be able to drive.

Don't use plagiarized sources.
Get Your Custom Essay on Is Sixteen Old Enough to Drive Just from $13,9/Page

While there are many teenage accidents every day, there are also lots of great drivers who don’t get any recognition simply because they weren’t causing problems. Below are a few of the reasons why sixteen year olds should be able to drive.

One of the main reasons sixteen year olds should be able to drive is because they have a lot more places need they need to be at that age. High schools host a variety of different clubs, sports teams, after school activities, etcetera.

While our parents may be able to take us to some of them, their work may get in the way of an important activity or something their student desperately needs to attend. Driving is the solution to this problem since we are able to take ourselves where we need to be without interfering too much with our parent’s schedules. If you don’t allow teens to drive until they are eighteen it would be a huge inconvenience and would inevitably cause teens to attend fewer and fewer extracurricular activities which in the end will do more harm to our academic success than good.

While driving at sixteen does have many benefits, many people are concerned that sixteen year olds aren’t mature enough to be able to drive. They believe that we cause too many accidents and that it would be better to wait until we are a bit older to start driving. While these accusations do have a premise the ideology that teens are inevitably going to turn into careless, unsafe drivers is false. While there are many cases of teens doing reckless acts while driving such as drinking, texting and all the other possibilities there are also the ones who do exceptionally well on the road. Blaming all sixteen year olds because of the bad habits of a few of them is discourteous to the good teen drivers out there. Instead of raising the age limit the UTS should instead dole out harsher punishments for major infringements of the law such as when driving under the influence while being underage. These would be much more effective than raising the age limit.

Lastly one of the most damaging things the changing the age limit would do is decrease our driving experience. Starting to drive at a young age helps us gain valuable experience in driving and allows us to get more comfortable behind the wheel. Raising the age limit would waste time that could’ve been used to benefit teen drivers and help them to better understand how to drive. No matter what age you start at in the beginning you will still have new drivers that are bound to make mistakes. Starting to drive later in life is a waste of time and teens are better off starting at sixteen just like they always have.

In conclusion, yes, sixteen is old enough to drive. While teenage driving does have a few cons to it, it will do more to benefit us in the end. People need to be less concerned with what age group is behind the wheel and instead focus on ways to help our youth become better drivers. If society focuses more on how to improve driving in all age groups instead of blaming just one then the roads will end up being safer for everybody.

Is Sixteen Old Enough to Drive. (2016, Oct 11). Retrieved from https://studymoose.com/is-sixteen-old-enough-to-drive-essay 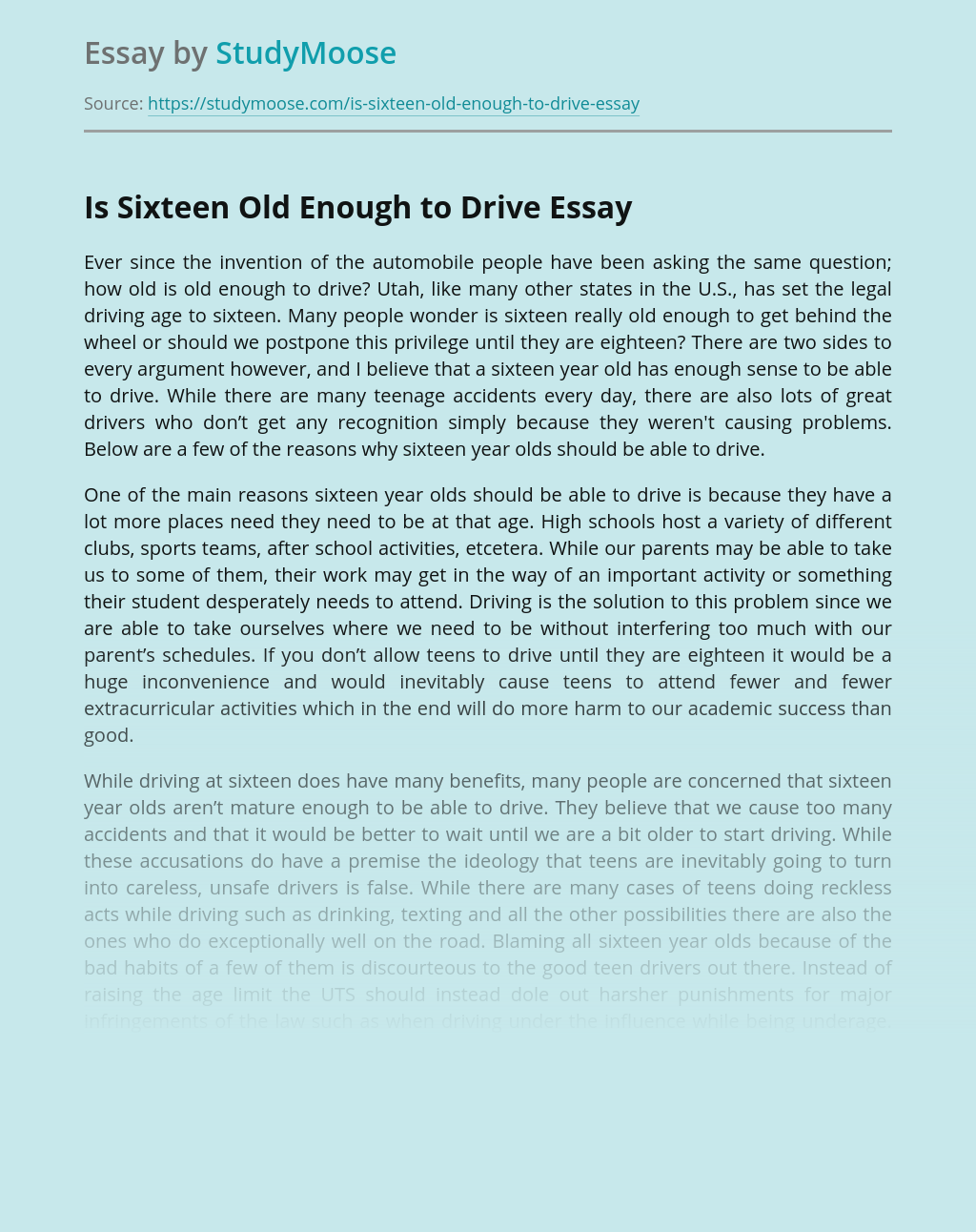 Did you understand that 27 individuals in America pass away every day due to drunk driving deaths and another 15 due to deaths linked to sidetracked driving? According to Johnston and Wiggins, 2012 Every year there are thousands of fatal car crashes due to distracted drivers. Distracted driving is not just triggered from texting &...

The sun is setting as you put your car in drive, pulling out into bumper to bumper traffic. As you sit with a pounding headache trying to decompress from just another day, praying there will be a break in traffic so you can get home. Juggling work, school, and family is hard, and just think,...

Road accidents have been and will continue to be one of the greatest health hazards. Statistically, it has been shown that the number of death and injuries due to road accidents. It has been increasing steadily. Why these road accidents, occurring in our daily routines? Is they forgot road safety rules? There are many causes...

View sample
Should Senior Citizens Have to Retake the Driving Test?

Whether seniors must retake the motorist’s test is a really interesting and controversial subject. Although many individuals feel that singling out a specific group for special treatment is discriminatory, I think this is surpassed by the safety issues included. Elderly individuals are infamously bad motorists, and have a disproportionate variety of mishaps. With the exception...