Is Shylock Tragic Hero or the Villain?

What defines a villain as such an evil person? What qualities and actions determine whether or not this individual is deserving of the title villain? What is it that distinguishes a villain, from being confused with a tragic hero? These two descriptions are commonly confused and especially in the case of Shylock from the William Shakespeares play, The Merchant of Venice. The question of which role Shylock falls into can be debated heavily. However, if looked at closely it becomes quite clear that Shylock is the villain, rather than the tragic hero.

Don't use plagiarized sources. Get your custom essay on
“ Is Shylock Tragic Hero or the Villain? ”
Get custom paper
NEW! smart matching with writer

This is seen by how he treats those individuals around him, where his priorities are and by his choice of faith.

First, Shylock demonstrates a complete disregard for the feelings of those around him throughout the play. When in contact with the servant Lancelot, Shylock speaks badly of him behind his back when he says, “The patch is kind enough, but a huge feeder, Snail-slow in profit, and he sleeps by day More than the wildcat.

He believes he can disrespect Lancelot and talk behind his back because he has more money and is from a higher social class. He also displays a lack of respect when handling the loan situation with Antonio, the Venetian merchant. He behaved in a manor befitting a snake rather than a respectable moneylender, when he tricked Antonio into taking a loan that would require a pound of flesh if the money was not replenished in an acceptable amount of time.

His actions towards Lancelot could be explained by ignorance and his demands of Antonio with greed, but what about the feelings of his daughter as she describes her father, Shylock, as Satan? Shylock mistreated her in a way that was inexcusable, as he restricted her from making her own decisions. What was she to do when she fell in love with the Christian man known as Lorenzo? She knew full well that her father would not allow such a thing to happen. Shylock mistreated all those around him, including those that were closets to him. This came as a result of his misconstrued priorities.

In life, it is a most important thing to have correct priorities and to know what is important and what is not. Shylock either did not know or did not care, for his priorities were completely out of line. The first example of this is when he could not figure out which he would miss more, his one and only daughter or the valuables that she took with her. In act 3, scene 2, he rants and raves of his lost money as if it is his child. He shows complete lack of priorities here as he sets money and riches above his loved ones. Another instance of his lack of setting his priorities correctly is when he attempts to stick to his deal of getting a pound of flesh from Antonio. This shows a huge lack of judgement on his part and he eventually pays for it by losing his money and his faith. Which leads to the third aspect of why shylock was a villain, his religion.

In the Elizabethan Age, being a Jew was considered as evil as any other sin for it meant that the individual was simply not a Christian. The item that especially added onto this villainy was his outspoken hatred for the Christians and his emphasis on avoiding them and on ignoring them. He commands his daughter to board the house up so that not even the sound of Christian music will enter into the house. This hatred and resent towards Christians only added onto his resume as the villain of the play.

Finally, the confusion and debate over whether or not Shylock was the tragic hero or the villain is actually a very simple decision to make. When the aspects of how he treated those around him, his priorities and his religion are seen. It becomes quite evident that Shylock is the villain of The Merchant of Venice.

Is Shylock Tragic Hero or the Villain?. (2021, Dec 07). Retrieved from http://studymoose.com/is-shylock-tragic-hero-or-the-villain-essay 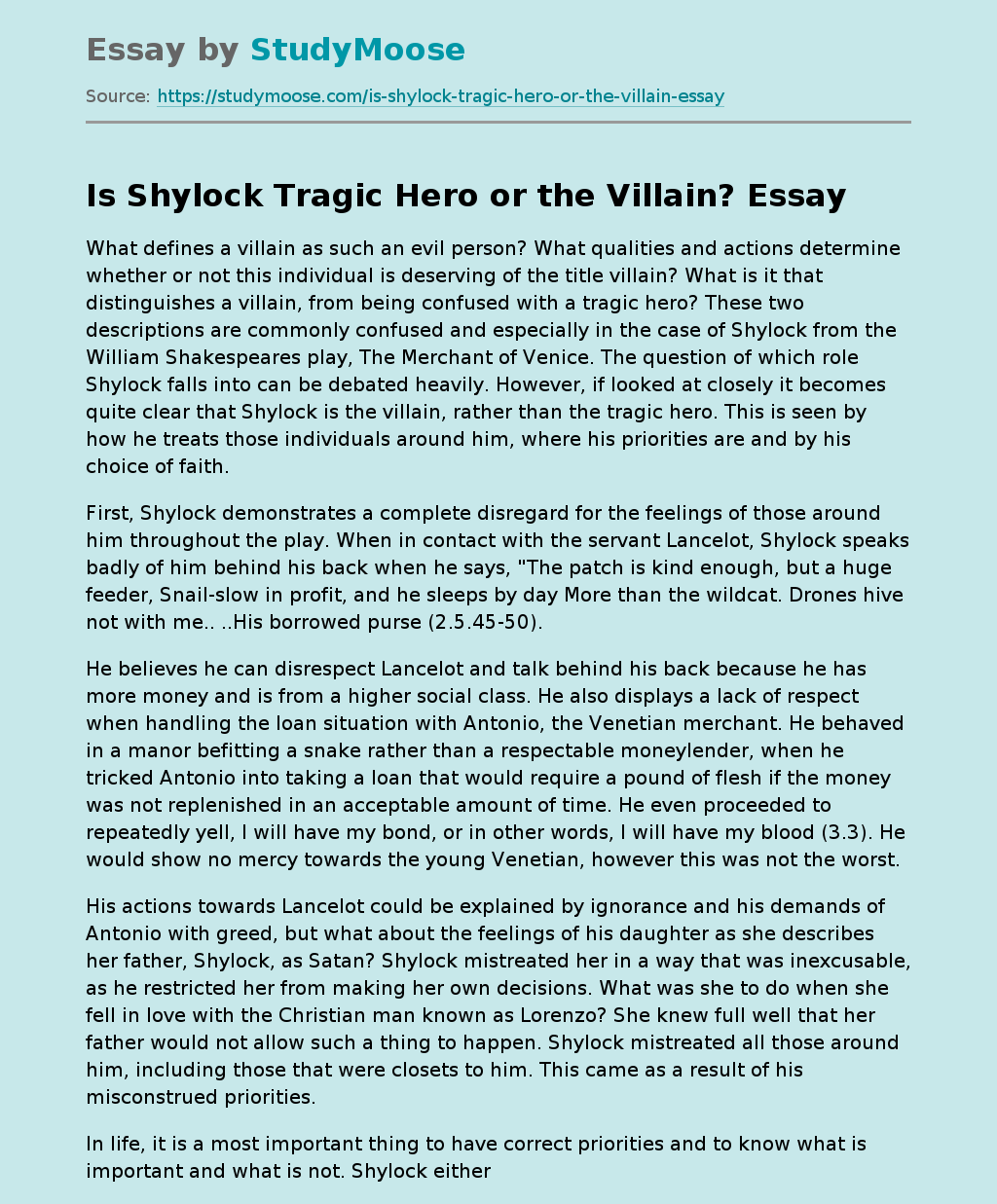