Is Media A Boon Or A Curse

Is media a boon or a curse? Everything in this modern age is powered by media from the moment we wake up until we sleep at night. Have we ever asked ourselves how all of this affects our reasoning, our power to choose and our lifestyle? Since mass media is used to communicate and interact with people from various walks of life, it can often result in a conflict of opinions. The media, specifically in India, represents a convergence of paradoxes: tradition and modernity; anarchy and order; diversity and unity; conflict and cooperation; news and views; feudalism and democracy; the free market and monopoly.

Don't use plagiarized sources. Get your custom essay on
“ Is Media A Boon Or A Curse ”
Get custom paper
NEW! smart matching with writer

Mass media enjoys a very prominent role in our lives. Therefore, there are various effects of mass media on society at large.

What is Mass Media

Technological determinism- this term is commonly referred to as the way some people think that it is the machines and their development that drove and brought changes to economy and culture.

On the other hand, many people also see technology as a more neutral claim, that, it is not the technology and it’s advent that had brought changes to the people and society, rather, the reason for so is the way how people use it. For whether, they use it for
good or bad.

People vary in terms of their judgements about social networking. Some had considered boon insights and some had not. But presenting its effects would somehow build more insights.

Developing friendships is one of the advantages of social networking.

There are millions of people browsing the internet daily to search active individuals online who want to develop professional relationships and friendly bond with them. Networking sites enable you to be your real self. While interacting with people online, you get to know them more and thus, develop social relationships. “People trust one another which eventually lead to meaningful relationships. Networking sites are a means to bring you new opportunities, responsive followers and life-long friends” . . . (Lee Burkhart Shaw: 1973).

Social networking also enables mind sharing and insights. While interacting with people online, you get a unique perspective into their lives and their problems, signifying you have now gone unto their lives. Learning about their lives will eventually lead to helping, advising and other means on how you can show yourself to them. And in return, you will receive feedbacks and gain trust from them. In result is mind sharing. “Since social networking is human focused, it is a great atmosphere to get feedback, research and insight” (Mark Smith: 2001). Although there are really instances that people do not want to be told, forced, spammed or made to do anything. But then, when you are now involved with them, meaning, have gone far through knowing them, the entire environment changes. “Remember, whatever your aim is- to make friends, build new clients or to know different religions, it can be fulfilled through creating a profile that contains truth, informative and things that you enjoy doing” (Thomas J. Sullinan: 1969, Introduction to Social Problems). Through social networking, making friends with people who are very far and are not culture-related, just as for example an American citizen had made friends online with a Filipino is very possible.

The wide reach offered by mass media is phenomenal. It can target both local and global audience. Over the years, mass media has played an important role in making people understand the meaning of democracy. We also come to know about the strengths and weaknesses of the economy of our country, the various problems faced by the nation, achievements of the nation in different sectors, through the prompt and precise reporting of different forms of media. In a country like ours, where there are many castes, religions and languages spoken, media has even more tough responsibility of conveying the true news to the citizens. Media plays a very important role in shaping the personality of people. It has been observed that citizens become more sensible and capable to shoulder their responsibility towards the nation and society because of the media. Media has done much good to society by exposing various scams, scandals, frauds, embezzlements and many other cases of corruption, leading to initiation of inquiries and other processes of prosecution against the perpetrators of these crimes.

Some of the recent cases are witness that the Press has been instrumental in putting an end to atrocities. It has also brought to light some of the rustic practices like child marriage, dowry, etc., to light and has empowered women especially to come to the forefront and express their grievance. Media has not just become a form of disseminating information and entertainment but also the most trusted form of advertising. Millions of consumers and advertisers today receive a flood of information through commercial advertising. Recently, online media has become an improved modern method of interaction. Its quick and easy access at the touch of a button has not only made media powerful but also helps in keeping us updated even on the move. Mass media can be used for educational purposes in an effective manner, and media is a boon for all age groups and people from different walks of life in many ways. They get news, views, and constructive information related to the subject of their choice.

However, media suffers from some pitfalls; growing consumerism and materialism have adversely impacted our media. At times, the information reported may not be authentic from every angle. Hence, there may be a misinterpretation of a situation. News can be manipulated to influence the minds of the audiences. For example, a particular political party may manipulate reports in their favour, which would indicate the political control in the media. Media bias can occur due to various issues. A journalist or an editor may give personal preference to an issue. A particular event or a celebrity may receive undue importance and set wrong ideals before the youth. It may present an ostentatious lifestyle, which may inculcate wrong ideals amongst youngsters. Unnecessary sensationalism of an issue may project incorrect information to the public. There is the danger that comes when making money is more important than quality of information flow.

It clearly hampers the honest and unbiased functioning of the organisation. Due to the rise in social media, we have become a population that is afraid to be ‘left out’ – we need to know things that really has no value, and, to a certain extent, we are at risk of filling our lives and brains with worthless information at the expense of meaningful dialog and interactions. Misleading messages may divert young minds towards a wrong path. Wrong interpretation of news may even blow things out of proportion. This would create further unrest in any place or even violence in case of extreme situations. At times, a particular event or news item may receive too much attention simply because of the lack of important news or snippets. It presents a wrong notion before the public and clogs their minds with unnecessary information.

Media strongly influences the minds of the people who read or view what has been published, so it is important for the publishers and publications to be careful and cautious in handling the inputs they get from their reporters. Media is a boon if it is socially responsible, unbiased, non-political, informative and educative to the masses but not to a class alone. But, it is a curse if it carries information or coverage to sensationalise, create curiosity among the public, misrepresentation of facts at the cost of someone’s reputation. For long-term solutions, we will have to bank on the educational institutions to educate, train, groom and prepare the youth to be more discerning viewers rather than passive spectators or participants in order to avoid any irresponsible influence or working of the media. 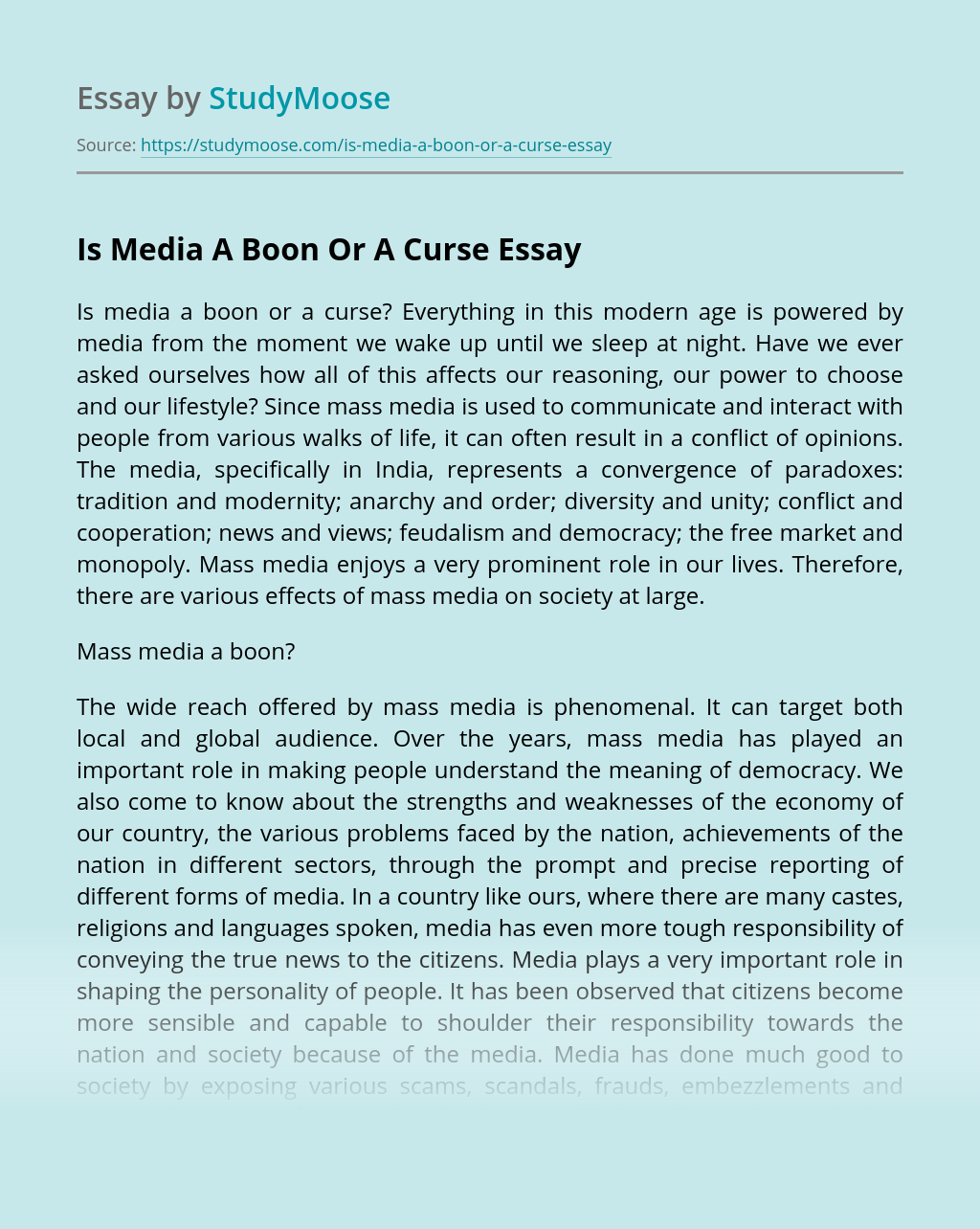