Is Industrial Waste the Main Reason for Global Warming

This gases that accumulate on the atmosphere are called Greenhouse gases. This gases contain carbon, that is generated by burning fossil fuels in electricity generation, transport, heating, industry and construction. This gases also contain methane that comes from livestock rice farming and waste tips, nitrogen oxide, that is caused by excess of use of fertilizers and the greenhouse gases also contains HCFC that is a special contain because it doesn’t makes damage to the ozone layer but it makes quicker the greenhouse effect.

Don't use plagiarized sources. Get your custom essay on
“ Is Industrial Waste the Main Reason for Global Warming ”
Get custom paper
NEW! smart matching with writer

The GreenScientists and climate policy always said that “human activity” is the main cause for global warming. When human activity is mentioned, I talk about all contamination activity or process that human makes that contaminate the earth. Mainly the people that are generating this huge problem are the ones in the factories or in the government. They are the only ones that have the big shot opportunity to change this tremendous cause, and are much more responsible than us because they have the power to do it.

Before starting to fully throw guilt to the government and rich people I have to admit that human wants are insatiable and covering all this wants is really expensive in lots of terms. And this human wants are the ones that demand producers and send them the message to not stopping producing and making pollution by factory waste, so with this conclusion i think the main cause of the big problem is the extremely high demand that normal human make on factories and governments to consume and consume.

The industrial factories are the ones who generate the gases which contain carbon. This gases are liberated to the air and get together in the atmosphere, when this gases join they start breaking and penetrating the atmosphere. This products are the one that generate the global warming. Apart from damaging the atmosphere layer, they generate a mirror effect that contains the temperature between the layer and the earth. The most dangerous fact is that the uv rays are the ones that generate diseases in human body. Also this mirror effect generates more condensation because there is more heat at seas so more vapor is generated due to the temperature so precipitations rise.The scientist had made a great investigation between the difference between the natural warming and human warming– and because a loud minority of fossil fuel companies, ideological groups, and politicians have insisted for decades that scientists are wrong – the terms of the broader debate about climate change are often stuck on this point, at least in the United States. Thinking on the human activity that generate this gases the idea is not to stop making diari things, the idea is to continue making them but in an ecological way.

house effect is the mirror effect that I mentioned before, this makes a block of temperature between the ozone layer and the earth and sea. This effect makes the sea to absorb the 50% of the

The opportunities we have to change this problems are having an electric car but that is a lot of money invested in it. The valor that one person invests in a car of this type is not balanced to the good change this car makes, so lots of people should invest in this car for this to work. The only disadvantage is the production of this new products that consist in many processed and new technology that probably that technology contaminates. As humans we know that human activity is really great and can change lots of things, but the real problems are in industries, which are incentivized to produce by the government which makes this for economic and commerce traits and the government doesn’t really care about this affect the industries are generating. While more industries are inserted more global warming effect happens. Through time more and more industries had appeared and the factories itself are always contaminating more and more

The numbers of carbon emissions are really impressive, two thirds of carbon emissions on the earth come from just 90 companies. Some of this companies have extracted more carbon from the earth than most of the countries some of this companies, had been discussing for years against people who wants to (save the world) and against scientist who say they are the main cause for global warming. Nowadays lots of organizations and people are telling to stop contamination because if we don’t take care of our world it is all going to be over by the next 12 years.

It is said that we all share the blame for global warming, and we blame each other when the 7 billion people living in this world are the real guilty, i think it is time to stop blaming and start helping.most of the human think that the world is going to be down when they were already dead, but while they think more about that, the end is closer and closer. If the ozone layer was broken there will be no difference between the earth’s oxygen and the gases that are in the space. So we will not breathe, and there will be no way to recover.

Government policies are constantly debating with industries about how to produce. This debates are between industries and organizations that care about the health of the people on the counties and the factories areas. Some people get strange diseases because of pollution in water or toxins in the air. those debates have involved conservatives and liberals talking past one another, with conservatives standing up for individual rights and liberals looking to hold corporations that cause public health problems accountable.To finish with the debates it is said that the issue between liberals and conservatives finish always in economic proposals and no sense things. I thinks that the main cause of this big problem are the factories, but i can’t ignore the personal and day a day decisions as turning of the water while im not using it, or taking a lower-time bath, and also to separate trash that if it is not separated it would be mixed and not processed as it should. We as individual we have a responsibility, it is also wrong for corporations to be against government policies that would reduce the harm we face from the products they sell us.

Also What happens is that the factories of food for example make the junky and yummy food.

Cheaper that fruits and vegetables for us to buying them so we buy the cheaper thing and at the same time we are making bigger this consume of the contaminant production these factories make. What also happens in factories is that as we insert toxics as prime matter to produce, what we produce is toxics, so now productions affects the health of the people.

Selling cigarettes is a really bad idea for anyone because to start with the cigarettes bring lung diseases and contain a certain contamination with the stubs that people throw without preoccupation to the floor. This can generate many money but affects directly the health of people and also their addictivity to something, and morally being addictive to something is bad.

The answer to the cigarettes is obvious but the future idea of the factories is to continue bringing money to them. Extracting more oils and carbon to the future. The big contrast that i see is that a kid that turns of a light, saves and helps more the world thana hola factory of cigarettes.

Is Industrial Waste the Main Reason for Global Warming. (2021, Feb 11). Retrieved from https://studymoose.com/is-industrial-waste-the-main-reason-for-global-warming-essay 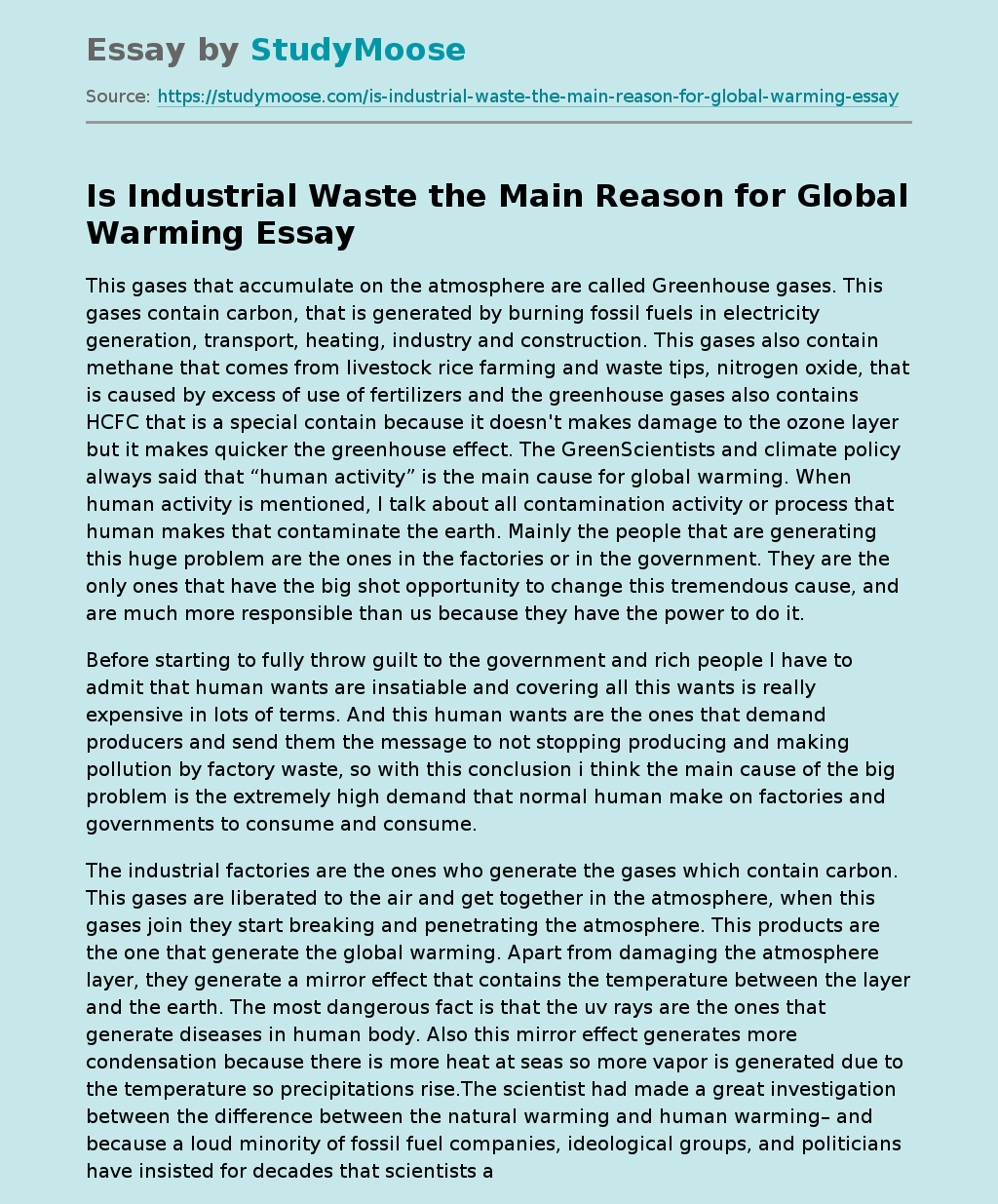