Historical theories are just like any theory – are subject to controversy among different populations and groups. Two of the most imminent historians, Oscar Handlin and William McNeil gave interesting viewpoints backed up by strong points. In Taking Sides: Clashing Views on Controversial Issues in American History, Volume II, gave an interesting overview of how these two elite historians are able to state their points so clearly. As highly influenced as their works are which allowed me to see from within their internal “window;” I find myself agreeing more with Handlin’s perspective.

Don't use plagiarized sources. Get your custom essay on
“ Is History True? ”
Get custom paper
NEW! smart matching with writer

According to Oscar Handlin from Truth in History (1979), gave a startling concept of how historical truth is based on the obvious evidences – those that we can understand and interpret. Handlin gave implicit indications that history does ring truth due to the fact that our current evidence of the past should be based on thoughtful analysis and not just necessary based on numerical or statistical evidence as those obtained by scientific measures.

Oscar Handling says that evidence is chronological, evidence is vocabulary, and evidence is context. Fact is something of common ground for all historians despite the difference in their interpretation and that scientific methods must be used to distinguish between fact and opinions. McNeil on the other hand, have a different opinion on this matter. McNeil speculates that historical truth is not influence by the desires or vision of the viewer, but is actually solid scientific evidence itself.

McNeil’s essay, “Truth, Myth, and History”, gave an emphasis on the falsehood of historical truth, and also highlights the idea that it have no “scientific methodology” behind it, making it nothing but judgments, choices, and interpretive opinions.

McNeil believe that all the “evidence” becomes nothing but a type of collection, almost like in literature for the reader to understand and interpret but does not give a credible “meaning or intelligibility to the record of the past.

” McNeil argues that truth is more likely a myth and distinguished by different groups in different situation at different time. In other words, historical truth is more like the way with which one interprets the material depending on their circumstance and environment. Almost like a self-fulfilled prophecy of the human mind and not actual facts. He further speculates that every culture has its own version of truth; truth about its own culture as well as the “truth” about other cultures.

Truth to one person may not be truth to another. He later concludes that all these outside forces of culture, background, relationships, and society affect the level of truth whether the individual realizes it or not. History tends to be biased based because they heavily relied on what the truth means to each person in a personal manner. McNeil believes that history is a myth and becomes self validating. In my analysis of the work of these two striking viewpoints, I must admit that I agree more with Handling for a variety of factors.

McNeil gives implications of his viewpoints on the truth and validity of history and how he feels that scientific evidence must be present for history to be consider a truth. I find this to be a flawed approach because to base every piece of knowledge upon “scientific evidence” has a bit of hypocritical ring to it. It is also important to point out that current historical findings are not found according to historical viewpoints alone, but is a mixture of scientific technology and many experts from all categorical discipline that weave up our current knowledge of history as well.

Just because we can’t prove something doesn’t mean it does not exist unless we can prove that it is indeed nonexistent. I believe that as humans, we all have an original curiosity for what we know now and just because something cannot be measured scientifically does not necessary label it as untrue. For instance, psychology was once considered “untrue” by scientific standards but have now find its way into the scientific arena. On the other hand, scientific evidence are not always “true” when new evidence proves that the previous “truth” is indeed false.

This gave me reasons to believe that it is better to take on a flexible approach when it comes to historical evidence. In defense of Handling’s viewpoint, historians also use scientific tools such as DNA replications and half-life techniques to determine the age and location of its artifacts. The truth in History is off course, as important as the truth in any discipline. History is based on facts derived from the past and thus provides a solid foundation on the truth of the information obtained.

Historians are able to obtain the historical information from different locations and find sources of evidence or those leading to evidence. The truth in history is thus, built on the foundation of facts and grounded in common knowledge and understanding. History is depended upon to develop a society and used as a tool to correct political mistakes of the past. Historians have the necessary skills and tools to analyze and validate historical events, evidence, and facts – as much as scientists have the skills and advanced technology to analyze scientific evidence. 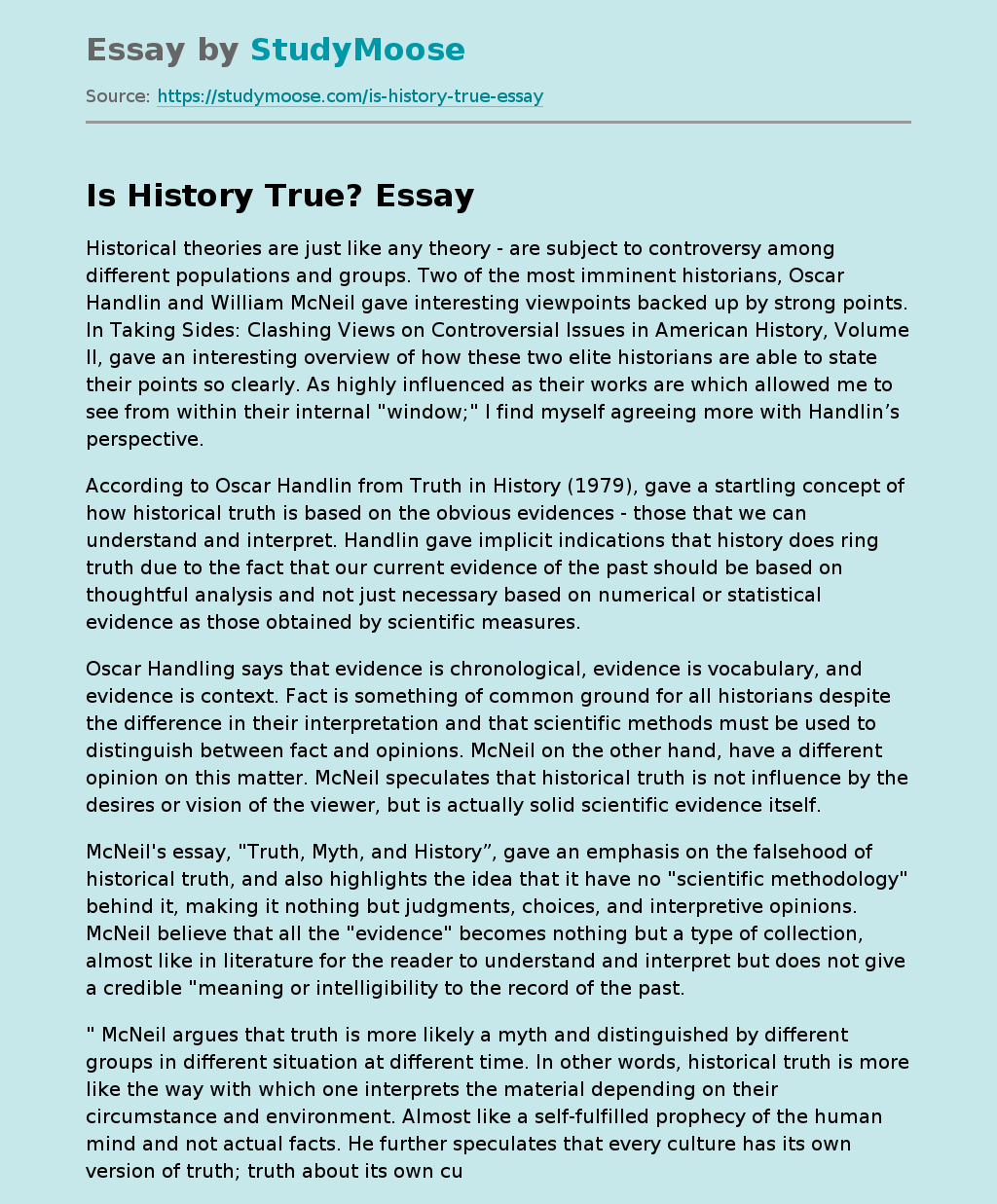