Is Gambling a Social Problem

Gambling is an act of playing for stakes in the hope of winning. It also involves a significant risk as the material good (usually money) wagered in the game may be lost if the player does not win. Common forms of gambling include cockfighting (which usually results in the death of one or both roosters), casinos (which has become a profitable business), slot machines (convenient for those who want to play individually), bookmaking (often used for predicting the winners of sports competitions), and caracruz (simplest form of gambling which has existed since ancient history).

There is an ongoing debate among social scientists, psychologists, business lobby groups, and others on the benefits and dangers of gambling. Some anti-gambling social activists argue that gambling is a serious social problem, while others argue that gambling problem is a problem of certain individuals who suffer from psychological ills and that in certain circumstances gambling on the contrary is a significant source of income (for example, for Native American tribes).

Gambling Is a Social Problem ?Gambling is associated with a range of social issues and thus needs to be designated as a social problem.

According to research on the topic, there is a correlation between various social problems and gambling. For example, Hardoon et al. , point out in their study that gambling problem among adolescents they studied stemmed from the lack of healthy familial and peer support, drug use problems, behavioral problems, problems related to family issues, and the parental gambling problems as well as their substance abuse.

According to Hardoon et al. , there is a significant familial contribution to gambling problems.

Many of their respondents said that their elder siblings had a strong influence in their decisions to experience gambling. Many of the respondents who suffered from gambling problems said that their parents themselves were problem gamblers. The study by Hardoon et al. , also points out that children of problem gamblers suffered from insecurity and a sense of “pervasive loss” (170). They also argue that gambling problem among parents leads to various kinds of familial dysfunctioning, including drug addiction, conduct problems, and delinquency. Hardoon et al. , also point out that there is a connection between gambling and substance use.

“Compared to nongamblers,” they write, “adolescent gamblers are more likely to drink alcohol, smoke tobacco, and use drugs” (171). Gamblers are three times more likely to use drugs than non-gamblers. Gambling and substance use problems among adolescents often leads to delinquency and illegal behavior. Adolescents suffering from serious gambling problems are also likely to experience difficulty in school such as decreased academic performance and poor grades.

More than half of the problem gamblers Hardoon et al. , studied suffered from conduct problems as well. They were more likely to break rules, get into troubles with individuals in authority, frequently display oppositional behavior, and join anti-social activities (171). This study in general demonstrates that the gambling problem is part of larger social issues and there is a clear correlation between gambling and various social problems.

Another study on the impact of gambling on college students suggests that about 1. 6% of the U. S. dult population meets the diagnostic criteria for pathological gambling (Level 1), and 3,85% reportedly suffer from subclinical (Level 2) gambling problems. Among college students, the rate of gambling problem on both levels is twice as high as it is among the general adult population. There are significant social and health-related problems associated with adolescent gambling problems. Adolescents and young adults addicted to gambling suffer from serious stress-related problems. Many of them attempt and even complete suicides. Among these adolescents and young adults, the rate of disorderly familial relationships is much higher.

There is a higher rate of comorbidity with other addictive disorders, and there are more frequent instances among these adolescents and young adults of arrests and convictions. The study concludes that “social norms–based social marketing campaigns (emphasizing accurate descriptive norms for alcohol) to successfully reduce alcohol use on campus” needs to be reworked and applied for combating gambling problems among college students (Larimer & Neighbors 241-242). This is another testament to the fact that gambling is a social problem and that the way to reduce it is to employ tools which are used for combating other social problems. Illuminating in this case is the experience of Native American tribes in the United States.

With the passing of the Indian Gaming Regulatory Act (IGRA) in 1988, which mandated legislative basis for managing and regulating Indian gaming, the number of casinos has sharply risen in Native American communities. As a result of this, one study of this phenomenon points out, Native Americans “are four to six times more likely to be pathological gamblers and two to five times more likely to be problem gamblers than non-Indians” (Momper 139).

The study also cites poverty, unemployment, and historical injustice as factors that contribute to the development of gambling problems among indigenous groups. According to this study, there is a similar correlation between the practice of excessive gambling and predisposition to other social and behavioral problems such as alcoholism, drug use, and disruptive behavior among Native American groups—but in significantly higher numbers than it is among non-Indians in the United States.

Gambling is Not a Social Problem ?While it is true that gambling addiction, just like any other addictive behaviors such as alcohol addiction or drug addiction, is a social problem, gambling itself is not a social problem. Participants of gambling make conscious decisions and they have the freedom to stop the practice whenever they think it is detrimental to their financial, psychological, and social conditions.

For example, in the year 1999 the National Gambling Impact Study Commission surveyed the U. S. opulation and found out that 86% of Americans had gambled some time in their lives, and that 68% gambled in 1999 alone (Seligman 86). Out of this large segment of the population who regularly gamble, only a tiny percentage of the population suffers from serious gambling problems. ?Discussions over the use of gambling are sometimes controversial because it is one of the businesses in America which has a bad reputation, on the one hand, and is so popular that more and more Americans are demanding gambling opportunities, on the other.

Due to its popularity, gambling has been legalized in all states except Hawaii, Tennessee, and Utah. Residents of these states also gamble, by traveling to other states or by taking advantage of online gambling opportunities. Total wagering in the Unites States is around $900 billion a year (constituting 10% of personal income), and the lion’s share of wagering takes place in casinos ($600 billion). And casinos now exist in twenty nine states. But these are official figures and unofficially the extent of gambling among Americans is likely to be much higher (Seligman 87). Gambling in the United States is a legitimate form of business, and designating it a social problem would necessitate that we label other legitimate forms of business as social problems as well.

As Seligman points out, “Wall Street offers plenty of bets with risk/reward opportunities that mirror those of slot machines—a long shot with occasional huge payout. Buying out-of-the-money puts on an airline stock just before a union vote would fall in that category. If the members unexpectedly vote against wage concessions, you could make a killing on the bankruptcy” (Seligman 89).

Some critics of gambling who criticize it from an economic perspective, say that, while gambling consumes time, energy, and resources, it does not produce any real output. But that argument can be used against most kinds of financial transactions and speculating, both of which are acceptable, and in today’s world, necessary components of international financing. As for the charge that problem gambling leads to comorbidity with other social problems such as alcohol abuse and drug use, more research is required to determine the nuances of this connection.

Does excessive gambling lead to alcohol abuse or is it the way around? If it is the former, then it is the problem of gambling addiction which needs to be labeled a social problem and remedied. If it is the latter, then it is the problem of alcoholism rather than gambling because alcohol abusers have more than one way of ruing their lives (gambling is not their only option), and even here the issue is the abusive consumption of alcohol, not alcohol consumption in general. Those who see gambling as a social problem ignore the fact that gambling may—and in many cases it does—lead to positive social outcomes.

This is generally the case in the Indian reservations in the U. S. As Momper points out, an IGRA passage which aimed at encouraging gambling on reservations for the purpose of raising the standards of living on the poorest reservations “was the only federal policy that produced lasting effects for tribes, inasmuch as the unemployment rate (38 percent) on 214 reservations with casinos decreased by 13 percent from 1989 to 1995. Even if one takes into account the increase in the number of problem gamblers, other social and economic gains from casinos on reservations greatly outweighed the negative consequences of this business. In addition to creating jobs, casinos on reservations provided the American Indian community with various social services and strengthened their social bonds (Momper 142; Cornell et al. , 1998).

While it is true that gambling addiction as increased among American Indian residents as a result of building casinos, in many instances improvements in standards of living took many of them out of poverty, decreasing the rate of behavioral problems and anti-social activities. ?In summary, both proponents of gambling-is-a-social-problem thesis and their opponents have strong arguments at hand. The debate is likely to continue without being resolved as it is a controversial topic and gambling among the U. S. population leads to mixed results: both positive and negative.

Is Gambling a Social Problem. (2016, Nov 14). Retrieved from http://studymoose.com/is-gambling-a-social-problem-essay 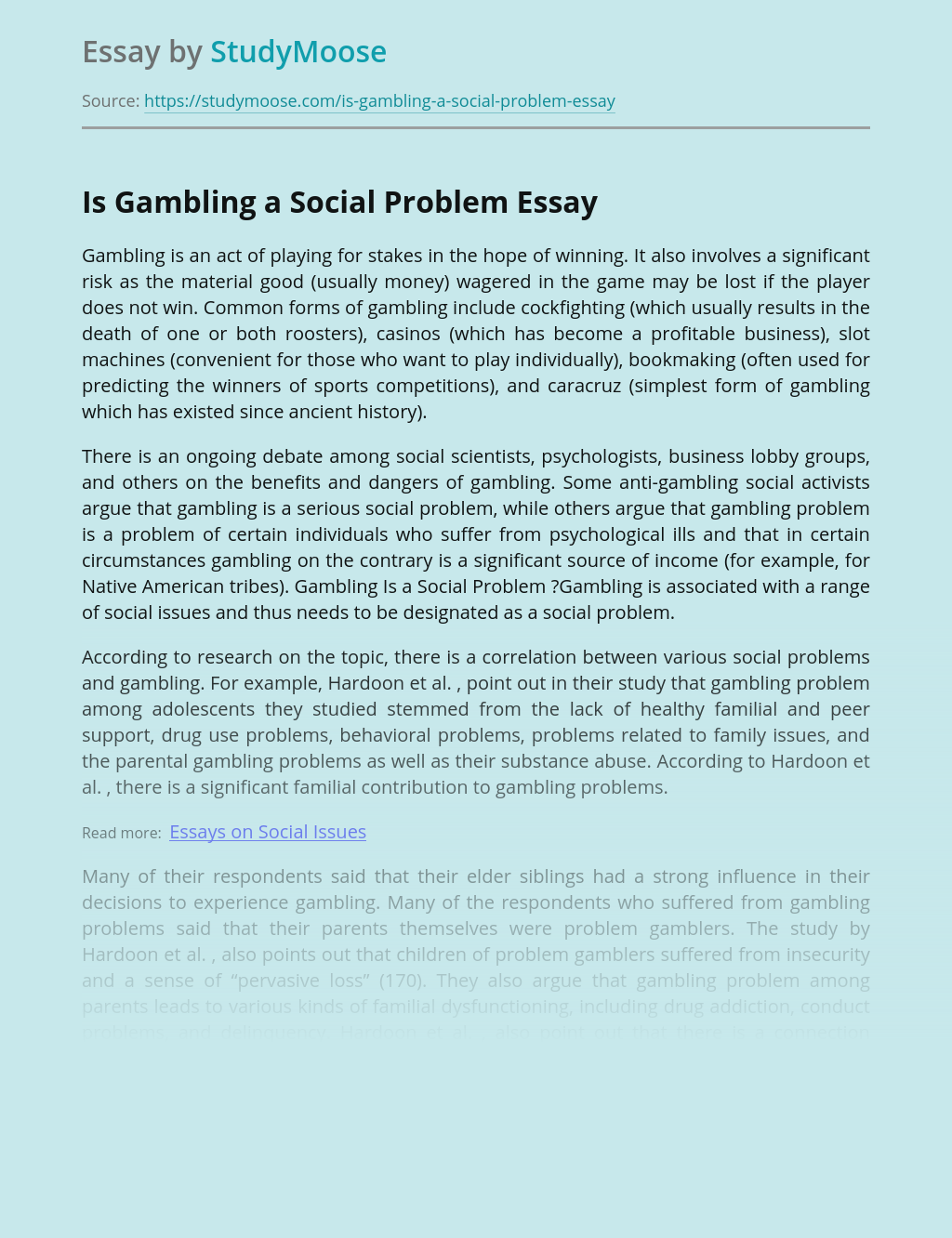 Don’t waste time
Get a verified writer to help you with Is Gambling a Social Problem
Hire verified writer
$35.80 for a 2-page paper
Stay Safe, Stay Original