Is Evil an intrinsic or extrinsic in Humans

Evil: A noun meaning profound immortality, wickedness and depravity. It’s just a simple four letter word, full of darkness. There is a little bit of evil in everyone, varying in degree and severity, but it’s up to you whether you let it show or not According to Mr. Golding, evil is intrinsic in human beings. That means that evil is an instinct to humans, a part of them. Many people can deny that fact, however it is suppressed inside of humans and will come out in extreme situations or after traumatic experiences as a self-defense mechanism.

Don't use plagiarized sources. Get your custom essay on
“ Is Evil an intrinsic or extrinsic in Humans ”
Get custom paper
NEW! smart matching with writer

However, what is evil? What defines evil? What can we compare evil to? Evil, to some people, are the acts that are against a certain religion, culture, society, etc. Many times, Again, evil is personified, and the most common evil known today that is personified is Satan, also known as Lucifer or the Devil. That includes the “goody two shoes” people, they have Evil Intents and thoughts, but they work well at suppressing it.

But evil isn’t something personified, if not, it is human nature. In “The Lord of the Flies”, all the boys are stuck on the island and are all in the same situation. However, the boys enjoy mocking Piggy because he is physically inferior. In the human mind, placing someone below themselves increases their self-confidence so that they feel superior and better about themselves. In many cases this appears in bullying. There are examples such as, “’You’re taking too much,’ said Jack Merridew.

‘Shut up, Fatty.’ Laughter arose. ‘He’s not Fatty,’ cried Ralph, ‘his real name’s Piggy!’… a storm of laughter arose…” and “’His specs – use them as burning glasses!’ Piggy was surrounded before he could back away. ‘Here – let me go!’… ‘My specs!’ howled Piggy. ‘Give me my specs!’” In both these instances, the boys took advantage of his physical disadvantage due to his asthma and mocking him for his body image.

Evil could also be portrayed as self-preservation and survival. Although Simon’s death is a blur and is hard to comprehend, the boys attacked Simon, thinking that he was the beast and also using the excuse that it was a mistake and that they did not know as an excuse to get carried away by the game and simply attacked him for pleasure. Anyhow, isn’t murder considered evil? If this isn’t murder, what is this? And is this terrible act, or so to speak, evil?

In other books like Battle Royale and the Hunger Games, Humans have defined and showed their evil psychological side as it has been released in the terms of a kill or be killed situation, or just for the fun of it as other people termed it, either it was issues with home, or hate for society

Mr. Golding is saying that evil is intrinsic, but since human society thinks that they are so civilized, humans think that evil is extrinsic. But under the right circumstances, survival and self-preservation surface, something that “civilized humans” consider as savage, barbaric, and evil. In other words, Evil is Intrinsic, but learning how to suppress that evil is Extrinsic need for humans. And as I looked into some reports, some of the parents of famous serial killers were not very civil and trying to compress.

Is Evil an intrinsic or extrinsic in Humans. (2016, May 24). Retrieved from http://studymoose.com/is-evil-an-intrinsic-or-extrinsic-in-humans-essay 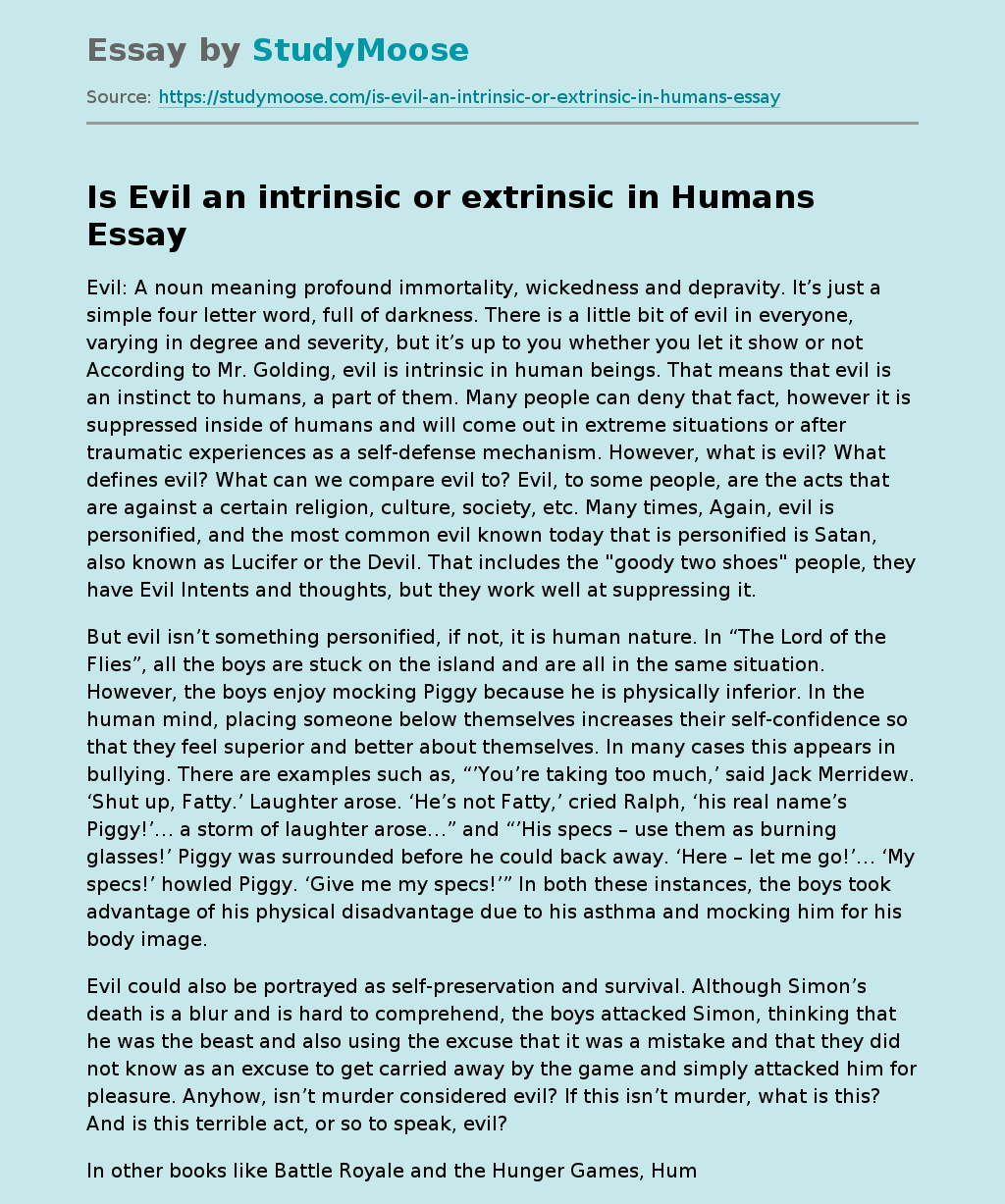