Would you feel safe knowing your rights could be revoked at any moment? This insecurity is currently being caused by the destructive personality of the current president of the United States, Donald Trump. As the leader of the free world many important global issues rest on the shoulders of this malicious figure. Imagine a world where your children can’t travel by car or nor can a sustainable number of crops be grown to feed the population. This is what the world is coming to and will end up like if we don’t band together to stop the horrific and unethical actions of Donald Trump.

The free world isn’t really looking that free, anymore is it?

America is a mixture of many different cultures and religions. The previous president was black but the current president is racist and openly discriminates against other races and religions. Trump wants to ban Muslims. His reason? He doesn’t have any trust or faith in them and thinks all Muslims are terrorists.

In January 2017, he tried to implement a travel ban to stop citizens from seven major Muslim countries from entering the U.S, however the supreme court deemed it as unconstitutional. He also has a personal grudge against Mexicans and because of that, he is planning to build a wall at the southern border between the U.S and Mexico. He is intent on making the Mexicans pay for the wall although this is highly unlikely to happen. It’s gotten to the extent where he has said, “I will immediately terminate President Obama’s illegal executive order on immigration.

” He is intolerably rude to black people for example he made a post saying he doesn’t want immigrants from ‘Sh*thole Countries’. Targeting both El Salvador and African countries. If someone is not white or rich, then to Trump they aren’t worth his time or care as he is unashamedly biased in favour of white rich businessman who will give him support if he protects their luxury lifestyles and lets them off for a few things like paying millions of dollars in tax.

Trump has recently made a new change to the tax bill, the biggest change to the tax system in 30 years. Its suggested the US corporate tax rate will be brought from the current 35% to 21%. It lowers the rates for the rich, the top tax rate in the US will fall from 39.6% to 37%. It applies to income above $500,000 for individuals and %600,000 for couples. The tax cuts are said to be favoured mainly only to the rich and a little to the middle class. That the lower class still must suffer and should suffer more. Instead of being focused on tax, they should focus more on healthcare, education and housing. There are so many problems for ethnic minorities. A lot of citizens are still in debt from health insurance, live in dangerous areas like ghettos and some young people may even quit school, then get involved in crime and lose their future. These should be the main concerns the US and Donald Trump focus on. As his campaigns say, ‘let’s make America great again’. Well, if the government focuses on these problems, the country will improve.

People assume that Donald Trump is good with money as he is a successful businessman. Nonetheless, we know he is not a self-started businessman as his father gave him “”””a small loan of a million dollars””””. Donald Trump has already exceeded what Obama spent in two years in ten weeks after taking office. His frequent trips to go golfing have already cost the U.S taxpayer at least $24 million (£19.2 million). That’s what Obama roughly used up on travel in his first two years of presidency. Also, the New York Police Department has confirmed that it cost between $127,000 and $146,000 (£101,000 and £116,000) a day to protect the First Lady Melania and their youngest son Barron while they reside in Trump Tower. Criticisers have pointed that if Trump cuts back on these visits, he could fund the social security and arts programmes that he is determined to abolish. To an attempt to make himself look better, he pledged to increase military spending by $54 billion (£43 billion), which cuts funds given to other agencies that he is planning to abolish.

People like Donald Trump because he knows how to build an empire as trump is obviously extremely rich and his track record for financial success proves that he can build an empire and despite the U.S being in trillions of dollars in debt, he might be able the sort of leader that might be able to turn it all around. However, trump’s decision to build a wall at the boarders will use a lot of the USA’s funds as the treaties and bribes he will have to do to convince the Mexicans will cost a lot. His constant holidays and breaks cost the U.S millions as mentioned in the previous paragraph. So, most federal government agencies are immediately hesitant because it will cause them problems. For example, from defence to national parks, they can be affected severely.

Donald Trump continues to divide opinion and create heated debate. A lot of people like Donald Trump because he’s rich, he’s a businessman and he wants America to be great again. As a result, he’s proven himself to be reckless, egotistical, selfish and a wannabe tyrant who is shamelessly racist and makes idiotic decisions that not only undo Obama’s amazing, miraculous works and progressive thinking, but also affects the diversity of ethnicities that make America so great. 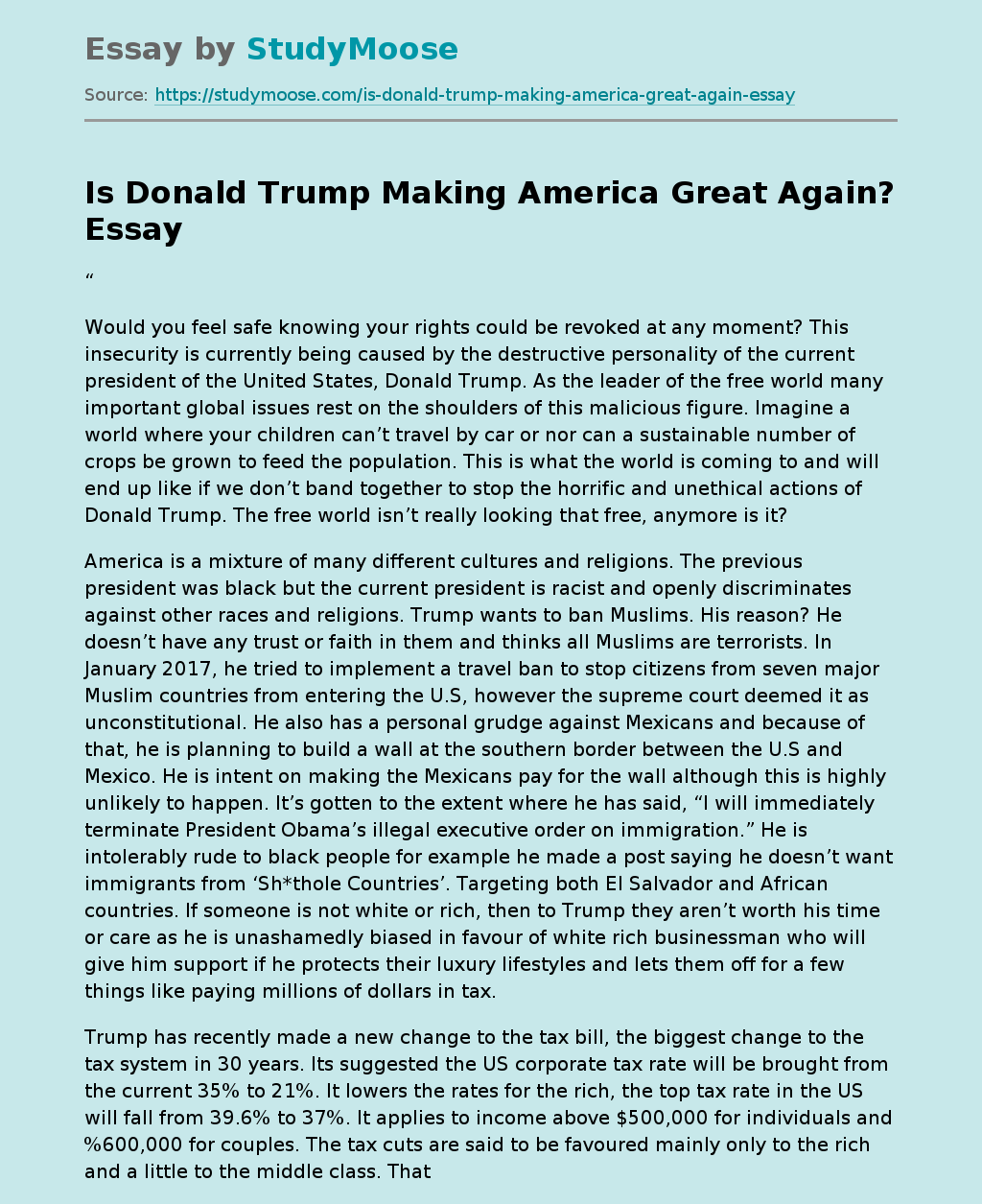