Is Compassion Really a Crime?

Imagine standing in a hospital room watching a man suffer in agonizing pain day after day and not being able to do anything about it. This is the situation that Barbara Huttmann faces in her essay “A Crime of Compassion.” Huttmann, a nurse, is forced to watch Mac live in agonizing pain without legally being able to let him die. The message that she displays in her essay is suffering people should be permitted to die if they aspire to do so.

Don't use plagiarized sources. Get your custom essay on
“ Is Compassion Really a Crime? ”
Get custom paper
NEW! smart matching with writer

Using various rhetorical devices, Huttmann portrays her message by first introducing Mac to the reader, then illustrating his suffering and finally letting him die.

Huttmann opens her essay by introducing Mac, a young police officer who is diagnosed with lung cancer. She uses imagery to recall the day that Mac first “walked into the hospital with 32 pounds of attack equipment, looking as if he could singlehandedly protect the whole city, if not the whole state” (420). This image allows the reader to visualize and characterize Mac prior to his cancer.

Contrastingly, Huttman later illustrates the Mac’s condition six months after he is diagnosed. At this point Mac has lost “his youth, his wit, his macho, his hair, his bowel and bladder control, his sense of taste and smell and his ability to do even the slightest thing for himself” (420).

Huttmann creates contrasting images to show the horrific changes Mac has gone through due to his diagnosis. In the first image, Mac is depicted as a super heroic figure who is indestructible.

As he enters the hospital, he carries with him a fearless attitude that enables people to look to him as a figure of protection. However, in the second image, his health has disintegrated and he has wasted away to nothingness. He can no longer perform basic tasks let alone protect anyone. While not yet relating to the message, these images begin to show the tragic course of events that Mac has fallen into in comparison to the previous state of his life.

Huttmann continues her essay by illustrating Mac’s immense suffering. At this point, Mac “had wasted away to a 60-pound skeleton kept alive by liquid food [the nurses] poured down a tube, i.v. solutions [they] dripped into his veins, and oxygen [they] piped into a mask on his face” (420). This hyperbole portrays the inhumane-like treatment Mac is receiving. The doctors and nurses are manually filling Mac’s body with the basic necessities of life just to keep him breathing. It is made clear to the reader that the life Mac is living, is not really living. He has essentially been reduced to a corpse that is unable to do anything but lie in pain. Everyday Mac’s body is being manipulated and preserved by the nurses, and every night Huttmann prayed that his “agonized” eyes would never again beg her to let him die (421).

The word “agonized” implies his intense, prolonged state of suffering. Not only has his body shut down, taking with it his independence, but the medicine that the doctors are giving him to ease the pain have had no significant result. Due to his horrifying situation, Mac is left to lie still as he is consumed by immense pain. Following this scene, Huttmann questions what gives her along with other doctors and nurses the right to force life on someone who had begged to die. She describes the work of the doctors as “meddling” in the plans of God (421). Here, Huttmann is implying that the doctors have no right or invitation to prolong Mac’s life and are therefore unwantedly interfering with his fate. Through all of these devices, Huttmann is portraying the awful state of Mac and showing the reader that allowing him to die would be a permanent solution to all of his pain and suffering.

Huttmann concludes the essay by describing how she was finally able to let Mac die. After the fifty second time he had stopped breathing, she held his hand and watched as his face transformed “from person to empty shell”. Huttmann is comparing Mac’s face to a shell that has been abandoned by its owner. Mac, a man who was once full of life, wishes, hopes and dreams, is now nothing but an empty body. All of the traits that had made him human, and given him value had at once visibly escaped his body and left behind it a corpse that feels no pain and is eternally at rest. This metaphor ends the essay and successfully delivers the message to the readers by giving them a sense of peace now that Mac’s constant state of agony has reached an end.

By the end of her essay, “A Crime of Compassion”, Barbara Huttmann is successfully able to use rhetorical devices to convey her message that dying people should be allowed to die if they aspire to do so. It is made clear to the readers that Mac’s life has drastically changed due to his cancer. He has gone from being a strong, fearless, super heroic figure, to being so ill he’s barely human, to finally being void of all life. Therefore it is indicates to the readers that Mac’s death was the only way to end his misery once and for all. Technically, Barbara Huttmann’s actions were illegal – she was not legally permitted to allow Mac to die. However, if her actions were morally just, do they really count as a crime?

Is Compassion Really a Crime?. (2016, Aug 06). Retrieved from http://studymoose.com/is-compassion-really-a-crime-essay 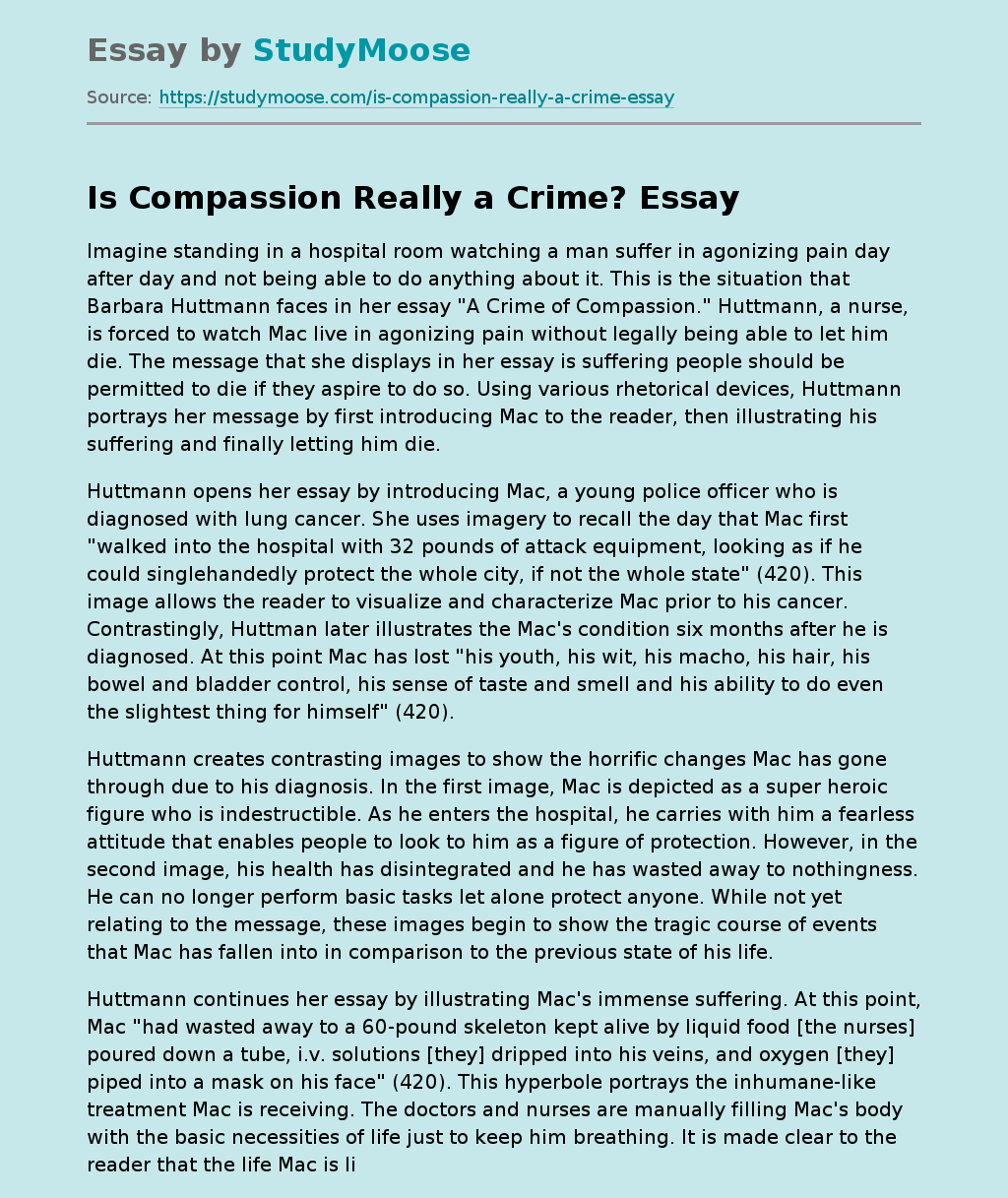