Chinua Achebe’s’ expresses his view on Heart of Darkness as an essentially racist novel and he is correct in saying this. His essay focuses mainly on the portrayal of the Congo as an ‘other world’ in which Conrad describes it to be an antithesis of Europe and the European standards and overall of civilisation as a whole. The racism presented by Conrad in the novel is evident through his manipulation of perspective and dehumanisation of the native Africans as discussed in Achebe’s essay.

Don't use plagiarized sources. Get your custom essay on
“ Is Chinua Achebe Correct in Asserting That Heart of Darkness Is Essentially a Racist Novel ”
Get custom paper
NEW! smart matching with writer

Joseph Conrad manipulates the perspective of the reader and the attitude they have towards the natives and Europeans alike through the bestowal of human expression to Europeans and the withholding of it from the Africans, as Achebe explains. When comparing the description of the two women, the African woman and European woman, the reader is able to depict a subtle yet definite difference in the way each woman’s expression is characterised. The African woman, who is seen to be as a mistress to Mr Kurtz, is illustrated as a very mysterious figure ‘’with an air of brooding over an inscrutable purpose’’ making her character unidentifiable.

Whereas the European woman is talked about more clearly and the reader can easily recognise her character because she is given emotions and feeling, ‘’she had a mature capacity for fidelity, for belief, for suffering’’. In Conrad characterising each woman in such different ways, the reader feels as though the European woman is more relatable as opposed to the native woman who is not expressed with feelings.

This lack of human expression in the description of the African woman, as commented on by Achebe, created a noticeable barrier between the complexity of natives and Europeans.

For the most part, the natives are not given any dialogue but instead their speech is replaced with ‘’a violent babble of uncouth sounds’’. Achebe however, refers to two significant parts of the novel when native Africans are given English dialogue. These are when the cannibals request the humans to eat, ‘’catch ‘im. Give ‘im to us. ’’. As well as the famous announcement, ‘’Mistah Kurtz—he dead’’. When first read, the reader thinks of these as high points for the natives because they appear to be at the same level as the Europeans in terms of getting dialogue ithin the novel. Chinua Achebe opposes this by stating that in reality they constitute some of his best assaults as these examples of dialogue in fact degrade the natives. This changes the reader’s perspective into assume that through the use of grunts and incoherent speech they are inferior and inarticulate in comparison to the language used by the Europeans. This difference in amount and quality of dialogue between the Africans and colonising Europeans contributes to making Heart of Darkness an essentially a racist novel.

The novel reveals the Africans being reduced to metaphorical expanse of dangerous and dark jungle of animals into which the European colonists venture. Chinua Achebe is correct in criticising Heart of Darkness as a racist novel, this is seen particularly through Conrad’s dehumanisation of the Congolese natives. Throughout the novel Conrad’s descriptions of the natives are used to create the idea of uncivilised, savage being whom cannot be of the same standards as the Europeans. Conrad’s most effective way of dehumanising the African people is through his use of imagery, ‘’a whirl of black limbs, as mass of hands’’.

This does not give the impression that these are human beings but instead that they are just parts of humans, therefore making them seem incomplete and inferior in comparison the way Europeans are described. This imagery is also important when Conrad describes native workers as ‘’decaying machinery’’, this creates the image that the Congolese are not valued as humans, as Europeans are, but rather as disposable articles who can easily be replaced after they have done their work. The language choices in which Conrad has made also have a great impact on the way the natives are perceived.

By using phrases such as ‘’the beaten nigger groaned somewhere’’, the Congolese natives are referred to in a very uncivilised manner. A way in which no European would ever be described leads the reader to believe that the Africans are in fact inferior to the Europeans, making them less of a human. These descriptions make it evident that Conrad’s writing involving the natives made them appear beast-like and savage therefore dehumanising them in a way that can only be seen as racist.

Although these racial depictions may not be used to knowingly dehumanise and objectify the Congolese people, Chinua Achebe rightly criticises Heart of Darkness as a racist novel. The constant comparison between the two cultures, African and European, are simply explained as one being civilised whereas the other is portrayed as savage. The unavoidable reality that Conrad’s descriptions of the natives were accurate expressions of the European perspective justifies Achebe’s assertion that Heart of Darkness is essentially a racist novel.

Is Chinua Achebe Correct in Asserting That Heart of Darkness Is Essentially a Racist Novel. (2016, Sep 26). Retrieved from http://studymoose.com/is-chinua-achebe-correct-in-asserting-that-heart-of-darkness-is-essentially-a-racist-novel-essay 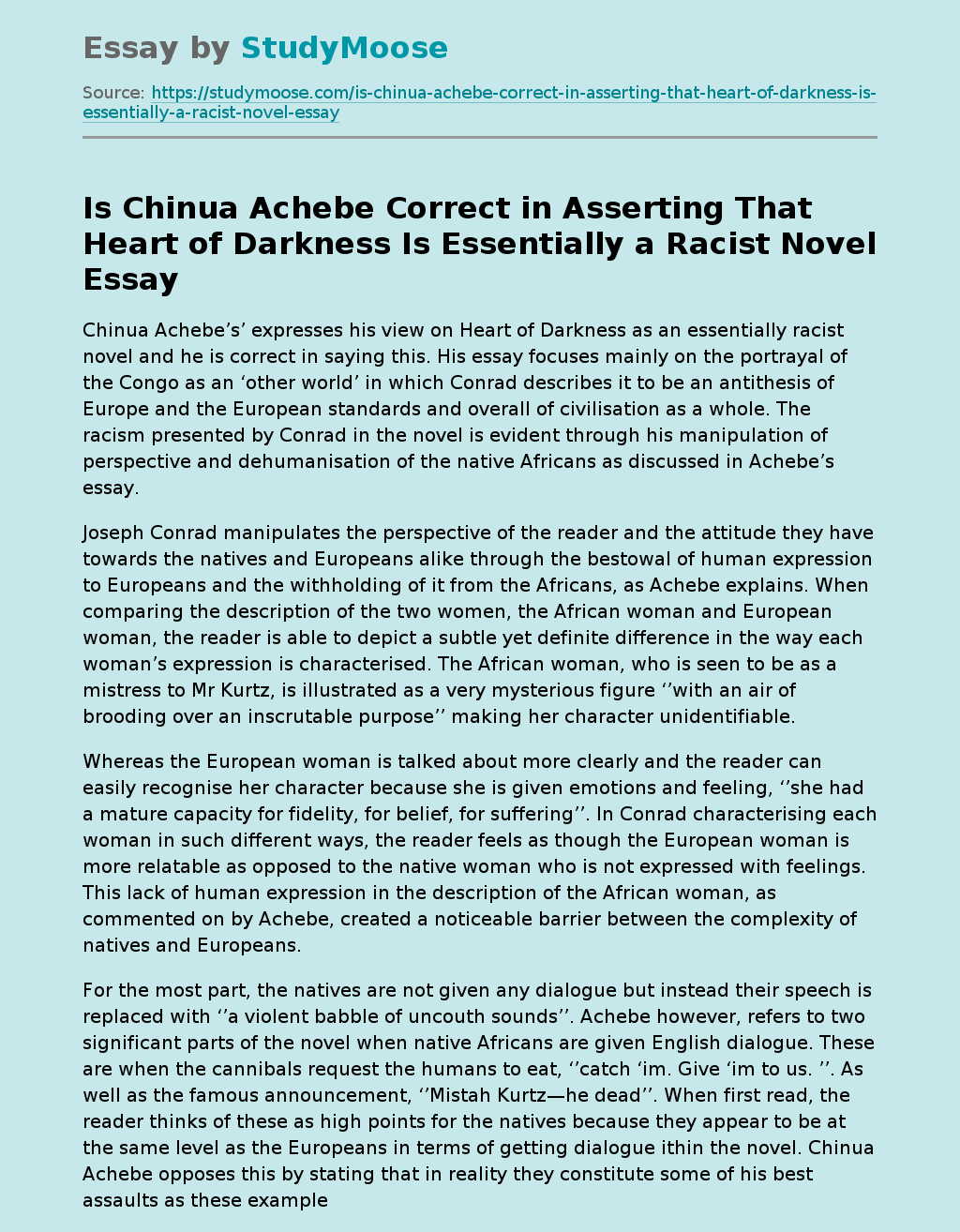