With the advent of new media, the dissemination of information has reached an unparalleled scale, bringing to the fore the inevitable reality of censorship. The issue of censorship has been a contentious one and conservatives argue for its instatement while liberals dispute its existence. In my opinion, I think that a form of censorship has to be put in place to maintain order in a society and protect the young from malignant content. However, many dispute the extent to which censorship should be put in place, arguing that censorship is a powerful weapon which can be abused by depraved individuals.

Don't use plagiarized sources. Get your custom essay on
“ Is censorship necessary? ”
Get custom paper
NEW! smart matching with writer

Besides, they too argue that censorship is an ineffective tool in fulfilling its said purpose.

Firstly, censorship remains imperative in maintaining order in a society. It impedes the dissemination of seditious content on the internet, thereby preventing any form of unhealthy social discourse and maintaining harmony among people. The dawn of the internet age has empowered people to voice out their own opinions whilst behind the perceived security of their keyboard.

This freedom of speech enabled by the internet inevitably calls for some form of oversight over its users. Not long ago, online furore erupted over notorious sex bloggers Alvin and Vivian, who posted a photo of themselves eating “Bak Kut Teh” or pork ribs soup.

What caused the controversy here was the catchline of the photo which read, “Happy breaking fast” in english. This resulted in a huge uproar from the muslim community as many felt that he was making a mockery out of the muslim tradition of fasting and abstinence from pork.

Such racially insensitive remarks might damage the social fabric of a society, resulting in undesirable social implications and disrupting the racial harmony of a society. With censorship, such seditious content can be contained and order will be preserved.

Censorship is also necessary to protect the young from the hordes of violent and sexual content found on the media. Along with the expansion of the internet, malicious content has proliferated across the media. Youths of today are being exposed to the media from a very young age and they are highly susceptible to influence from the media. Reality television shows such as WWE(World Wrestling Entertainment) portray scenes of violence as men take on one another in wrestling. What is particularly worrying here is that most of these scenes are acted out and amplified for dramatic effect. Young children may not be able to discern reality from the virtual world and they may be influenced by the violent content. While there is no hard scientific data or causal link between media violence and real life aggression, psychiatrists have proven with empirical evidence that constant exposure to violent content ultimately has an impact on behaviour. Besides, the proliferation of pornographic content on the internet is another cause for concern.

With the internet, pornography is easily accessible to children and minors are viewing pornography at a very young age. The extreme nature of pornography might distort their views on relationships and promote a more liberal and permissive attitude towards sex among teenagers. This might be the cause of the rise in teenage pregnancies ,sexually transmitted diseases and other societal issues. In this respect, we can clearly see the need for censorship on the internet in order to protect the young from being negatively influenced by the media.

However, censorship is a powerful weapon which can be abused by depraved individuals as tools of oppression. In authoritarian states where the media is controlled by the state, censorship allows for the incumbent to have complete control over its people. North Korea comes to mind where censorship and oppression is concern. The state-controlled media in North Korea censors nearly everything from the outside world and selectively reveals information to the people. This carefully orchestrated media campaign is used to boost the image of their supreme leader Kim Jong Un and build a cult of personality around him. Censorship in North Korea also helps in manipulating the masses. By blocking access to the outside world, people are unable to be discerning about the information they receive from the state media and they are blinded from the truth. From this perspective, we can see how censorship, when used unwisely, becomes a tool of oppression.

Lastly, censorship is also ineffective in fulfilling its purpose and it is, in some cases, self defeating. Censorship has given rise to what is now known as the Streisand effect- whereby the act of trying to suppress information results in the greater spread of the information in question. Where censorship is practiced, there would certainly be attempts to circumvent the system and access the censored content. Such is the case of the Great Firewall of China. While it is considered by many to be a huge success, there has been many methods of bypassing the system since its instatement in 2003. This illustrates the ineffectiveness of censorship in withholding information from the people. In this regard, we can see that censorship is not the best method in regulating the media.

To sum up, i think that although censorship is not entirely advantageous to the people, it is still imperative in protecting the interests of minors and maintaining order in a society. Censorship acts as a regulator of the internet and it is something which will remain relevant in time to come. 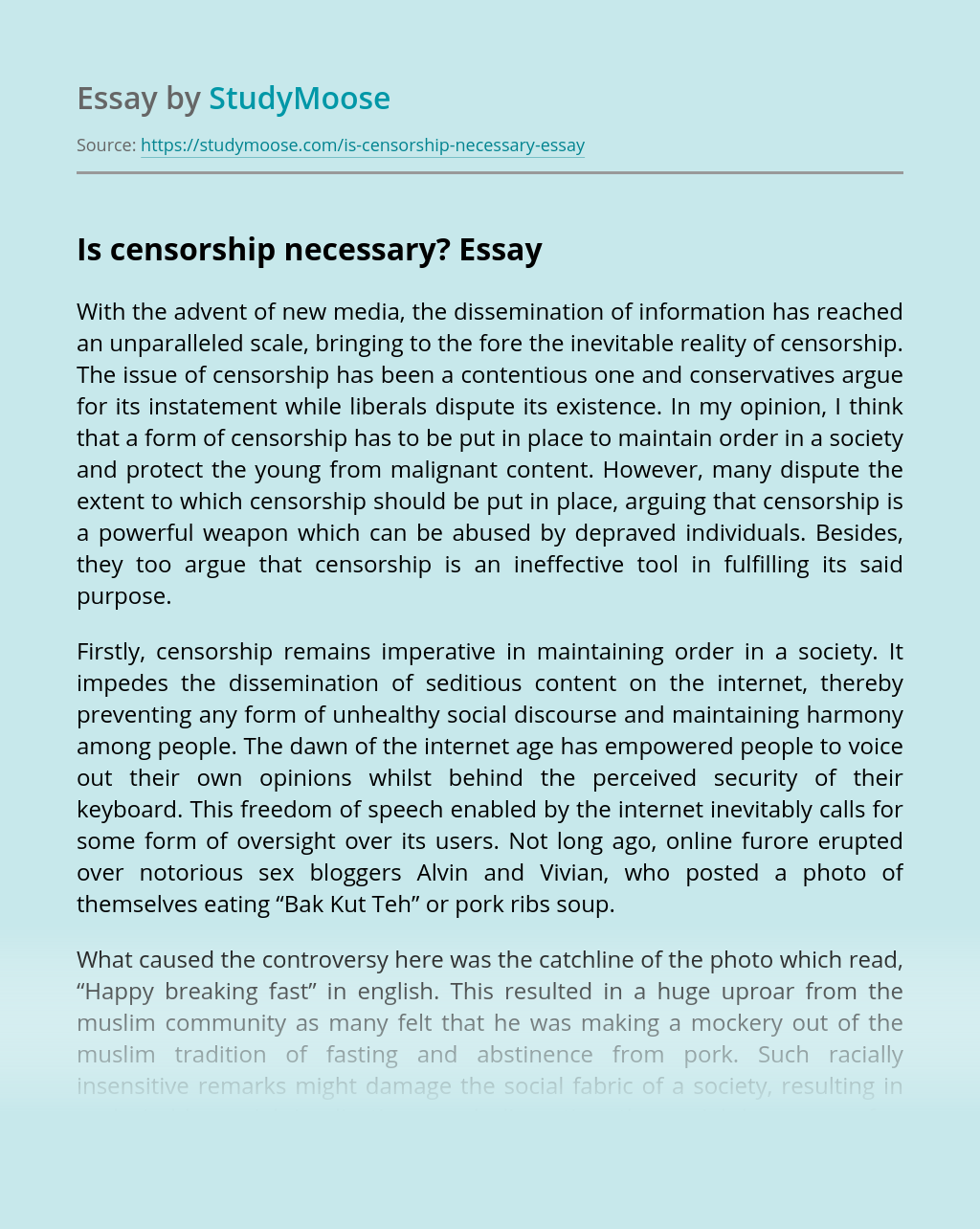