Is Being Vegetarian Truly Beneficial?

I think everyone would more agree that vegetarian is better for you and the environment, but I don’t agree. Humans were built on meat, and humans could survive only on meat for periods of time, just like our ancestors. Being meatless also lacks on a lot of nutrients that can lead to a multitude of diseases and problems, some life-changing. Sometimes, being vegetarian and not knowing what to do can really make you do the opposite of what you want.

Don't use plagiarized sources. Get your custom essay on
“ Is Being Vegetarian Truly Beneficial? ”
Get custom paper
NEW! smart matching with writer

The main and most important setback, is nutrient deprivation. Relying on plants means that you will have to deal with low vitamin D3 levels, leading to brittle bones. A plant-based diet also means low calcium, and not having the optimal intake of calcium means failing and weaker bones, so if you are going vegetarian because you want to have a healthy lifestyle with workouts, having weak bones will be a large setback. This diet is also lacking zinc, an essential nutrient for boosting your immune system.

Proficient in: Being Vegetarian

Also, almost all animal proteins are the leading source of iron. Not having enough iron in your blood means you are very likely to be soon suffering from anemia, a blood disease that makes you more fatigued, tired from climbing stairs and increase your heartbeat. But lacking in nutrients is not just bad for physical health, either.

Not only does the vegetarian diet lacking on nutrients promote physical illnesses, but also mental. In a representative community survey taken by scientists in 2012, they found an evident rise of mental disorders from vegetarians, which included stress, anxiety and depression.

They found in their mental health exams, that 31% of the vegetarians passed to have an anxiety disorder, where only 13% of meat-eaters passed. Also, while 24% of vegetarians suffered from depression compared to only 10% of meat-eaters. The scientists found that lack of vitamin B12 levels caused this mainly. There have also been eating disorders. About 4% of vegetarians said they binged, purged, taken diet pills, or had seriously restrained their food consumption, where only 0.8% of meat consumers said the same. A study team of Anna Bardone-Cone, Ellen Fitzsimmons-Craft, Megan Harney, Christine Maldonado, Melissa Lawson, Roma Smith and Paul Robinson found that about half of people with eating disorders have some form of link to a vegetarian diet. Lacking on protein-associated nutrients can be pretty life-concerning, but sometimes not having the plant nutrients aren?t as harmful in some cases.

Because of the miracles of evolutions, we can eat plants regularly. But we were designed to eat meat. Scientists found that we started eating meat for up to 2.5 million years ago, and we only developed a habit of eating plants. Being a herbivore hard for our body, too, because we were not designed for it. We do not have the build to rely on plants: four stomachs, any hint of capability for breaking down cellulose, any built in plant-tracking and identifying instincts, and we only have teeth capable of chewing plants because we have changed to do so. We have developed from meat, and we have evolved to have abnormally large brains because of the meat we consumed.

Is Being Vegetarian Truly Beneficial?. (2021, Jul 02). Retrieved from https://studymoose.com/is-being-vegetarian-truly-beneficial-example-essay 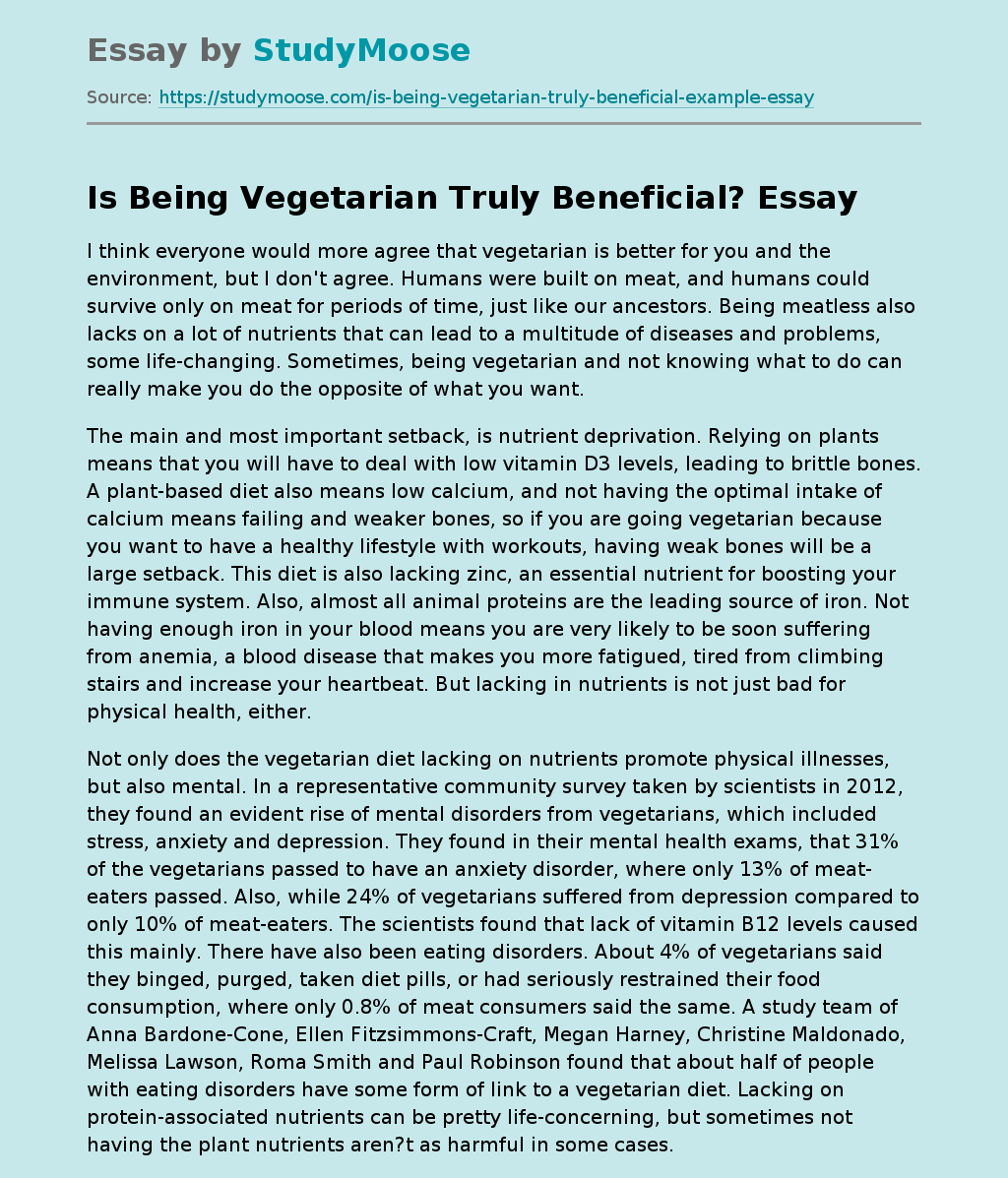