For many years when it started, advertising was a divine gift to the mass media. It embodied the epitome of information superhighway during the time when it was starting as it allowed consumers to get information about products and services at the comfort of their homes, while reading the newspaper for instance, or perhaps while watching the television or listening to the radio. Advertisers, however, were not content on how they can reach consumers and thus initiated ways in ensuring that every centavo they spend in advertising will pay off and entice consumers to buy.

Don't use plagiarized sources.
Get Your Custom Essay on Is Advertising Harmful? Just from $13,9/Page

Competition also grew as time passed by and today there are too many options for consumers to choose from. This put pressure in the advertisers. The need to sell pushed them to find ways to sell. Oftentimes, the advertising is the best medium to do so given the wide reach and reception that it has. This all led to the harmful effects that many scholars and researchers claim that advertising has.

The harms of advertising can be found in its effects in the media, economy, in children and families, and human behavior in general.

For one, the media has become advertiser-driven. While before the media’s thrust is to entertain and inform its audiences, it has now become a repository of information of advertisers, their products, and their services. Many shows, in fact, have now been created for the benefit of advertisers and to increase their selling points. There are television programs as well that are created entirely to market a single product, which creates monopoly against products who do not have the capacity such as finances to produce such advertising shows.

Economically, this subtle monopoly has lead many small businesses to close down and further empower the primacy of the larger competitors. (Harms and Kellner, n. d. ) These harmful effects are further ratified by the intrusion and repetitiveness of advertisements. From the time one wakes up, eats, rides to work or school, and goes back home to sleep, he is bombarded with advertiser information. Even going to the public restroom is not an exception ever since loo ads became a global trend. (Harms and Kellner, n. d. ) Even the telephone has become an avenue for advertisers.

Not only one among many have been caught by telemarketers during dinner, or even during Sunday lunch. The good thing about this is that employment increased, despite the turnover, in telemarketing. The bad thing is that this type of advertising is intrusive and unethical. Even private email addresses are testimonies to the intrusion that advertisers will waive for the sake of trying to sell. Children are also among the most affected by the harms of advertising. According to Dittman (2004), an average child is exposed to 40,000 advertising materials annually.

This figure includes all television commercials alone. There are other advertisements aired over the radio, in printed materials, and in fact wherever one looks. Even the schools have welcomed advertisers in campuses, though many institutions stay watchful on the advertisers and advertisements that they allow. Furthermore, studies show that just one exposure to an advertisement, especially in children, can make a register in the brain and even entice buying. This can influence children and adults as well to shop impulsively which has greatly affected consumerism and private lives across the globe.

For many instances, children will also nag their parents into buying them things that they saw in advertisements, or for money to buy these things. Even habits can be altered. Studies show that a child’s eating behavior can change drastically when exposed to junk food ads. Exposure to junk food ads alongside healthy food ads is not a solution as well, for children will remember junk food ads more. (Dittman, 2004) In an effort to combat these effects, American Academy of Pediatrics, American Psychological Association, and Kaiser Family Foundation has lead many organizations who are after stricter regulations in advertising.

The proponents enjoin groups with the similar vision and mission to create and propose ways to protect the society, highlighting on children, against the harmful effects of advertising. Stricter laws, proper monitoring, regulating bodies, and proper education are among the things viewed to solve the dilemma. (Dittman, 2004) Adult supervision is another thing to appeal for. Today, with kids having private access to the internet, television, radio, and reading materials in their bedrooms or schools, away from the eyes of their parents, they are put into a situation where they are not guided.

In such cases, they receive information as facts and even if there is a chance for them to weigh between right and wrong, between positive and negative, there is more probability that the influence that is imprinted on them will affect them. If the advertisement is negative, then the effect will equally be negative. (Dittman, 2004) Yet not all advertisements are intrusive and harmful. (Harms and Keller, n. d. ) There are advertisements that show good behavior and influence people towards the positive.

If at all always harmful, many advertisers downplay the bad knowing that audiences will not buy products which have negative impressions on them. (Harmful effects of advertising can be indirect, delayed, and cumulative, n. d. ) This care that advertisers take helps them increase their sales more profoundly. However, it is still a fact that advertising affects the human behavior in general and radiates these effects to their families and to the society ultimately. Advertising is a big leap for the mass media, and it is wrong to eliminate advertising at this point, even if it is torn between the good and the bad.

The right thing to do would be to subdue these advertisements and keep the information positive and varied. A good look at psychology, economics, and communication industries will also help. In the end, good advertisers win the game. 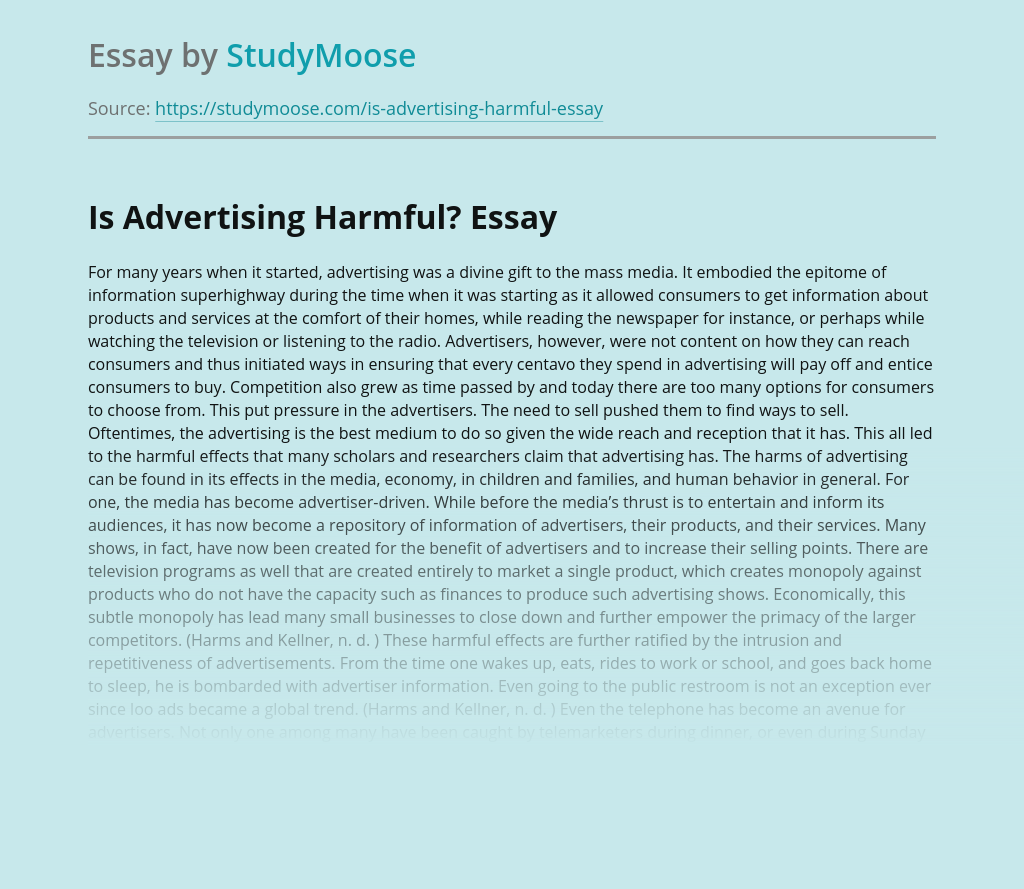 Femininity is the quality of being a female, which includes the behaviors and roles that are generally associated with women. In the 1960s and earlier, mothers usually stayed home, did the household chores such as laundry, cooking, cleaning, as well as taking care of the children. The men would go to work then return home...

What is ethnocentrism? Are ethnocentric values reflected in mass media? If so, provide examples. If not, why not? Ethnocentrism is when one places a culture, values, and views over that of another culture. This can be associated with American popular culture as the message with any popular trend tends to be a popularity contest. Quite...

A scope statement for a spring concert

Your roommate is about to submit a scope statement for a spring concert sponsored by the entertainment council at Western Evergreen State University (WESU). WESU is a residential university with over 22,000 students. This will be the first time in six years since WESU sponsored a spring concert. The entertainment council has budgeted $40,000 for...

Budweiser is one of the best-known brands of beer in America. Their ads and commercials have always been known for being humorous and entertaining. Millions of people look forward to seeing the Super Bowl half-time commercials mostly because of Budweiser’s notorious commercials. Budweiser takes advantage of its reputation and makes commercials that are witty and...