Irony In The Necklace And The Gift Of The Magi

Most relationships are based solely on love, generosity, and being respectful. This was exactly the case with The Gift of the Magi, however, with The Necklace, it was a different story. Both stories consist of two couples who are both low to the middle class. The first couple, Jim and Della, Both come off as a loving, generous couple. Personalities can clash immensely, and that’s what happened with Mathilde and her husband, Monsieur Loisel.

Both stories revolve around two married couples and their lives.

Don't use plagiarized sources. Get your custom essay on
“ Irony In The Necklace And The Gift Of The Magi ”
Get custom paper
NEW! smart matching with writer

Both couples are between the low and middle classes. Jim and Della’s relationship is equal. Both are generous and both gave up their prized possessions to gift each other a Christmas gift. They don’t have much but still play equal roles. However, Mathilde and Monsieur Loisel’s relationship is one-sided and toxic. Loisel is always providing while Mathilde asks for more and more. She also has a jealous personality and is very envious of Mme.

Frostier, who is fortunate enough to have more jewels and luxuries than her.

In The Gift Of The Magi, The couple was selfless, and generous when it comes to gift-giving. Jim and Della both gave up their prized possessions to gift each other a Christmas gift. They never asked for more or less. Della especially was happy with what she had. Although she knew she didn’t have much, She thought of cutting her hair off and sell it so she could buy him a chain for his watch.

Jim decided to sell the watch, which was a family heirloom and buys Della a beautiful comb for her long hair. They both sacrificed in order to buy something for each other. On the other hand, Mathilde and Loisel did not have equal roles, Instead, Mathilde was always asking for more and Loisel was providing. Mathilde was never quite satisfied with what she was given. In their story, Loisel brought home an invitation to a fancy party. Mathilde showed no sense of gratitude, She went straight to being upset over how she didn’t have a dress to wear.

In both stories, Pride is a big factor. In The Gift Of the Magi, The couple had so much pride, Neither of them was capable of telling each other that they didn’t have enough money to buy a Christmas gift. Pride also plays a big role in The Necklace as Mathilde was a very prideful woman. She had big aspirations which caused her to be miserable by the end of the story. Another theme in these two stories is love. Jim and Della loved each other to the point where they sold their prized possessions to buy each other a gift. Mathilde and Loisel had a one-sided relationship and Loisel was always the one providing, Little to no love was portrayed by Mathilde, as her personality was the envious, and ungrateful type. The impulse was also a very big theme that the stories had. In The Necklace, Mathilde was so worried about getting the necklace back to Mme. Frostier, That it took her ten years to pay the debt back. I think that she was very impulsive with this decision and she should have spoken to her friend first, Instead of jumping to conclusions. Impulse also has something to do with The Gift Of The Magi. Jim and Della were so impulsive in selling their prized possessions. They should have also spoken to each other instead of buying things each of them wouldn’t need anymore.

In The Gift Of The Magi, Della is not completely honest with her husband. In hopes to buy Jim a Christmas gift, She cuts her long, beautiful hair off and sells it for $20. This did mean she could buy him a present, however, it also made her quite anxious. In the text, it said “ Then she heard his step on the stairway down on the first flight, and she turned white for just a moment” This shows that she was scared of his reaction. In The Necklace, Mathilde was also dishonest. She showed dishonesty to Monsieur Loisel by taking money from him for the dress, but later she tells him she was upset because she had no jewels to wear to the minister’s party.

In both stories, wives play a big role just as much as husbands do. Della is selfless and she loves her husband to very great lengths. She cut off her long hair and sold it for $20, just so she could buy her husband, Jim, a decent Christmas gift. She would do anything for her husband, and she shows that throughout the story. Della portrays that she knows that Jim’s feelings will always be the same for her regardless of having long hair or not. Mathilde on the other hand is thankless throughout the story. Many times in the story, it shows that she is unappreciative of what she has. Mathilde wants to have a “high appearance”, she dreams of having expensive utensils, and a place in the higher society. She’s shown that she is a materialistic person, and she longs for wealth and admiration. These women are completely unalike, Della is in love with her husband, while Mathilde doesn’t value Monsieur Loisel.

Irony In The Necklace And The Gift Of The Magi. (2020, Oct 11). Retrieved from https://studymoose.com/irony-in-the-necklace-and-the-gift-of-the-magi-essay 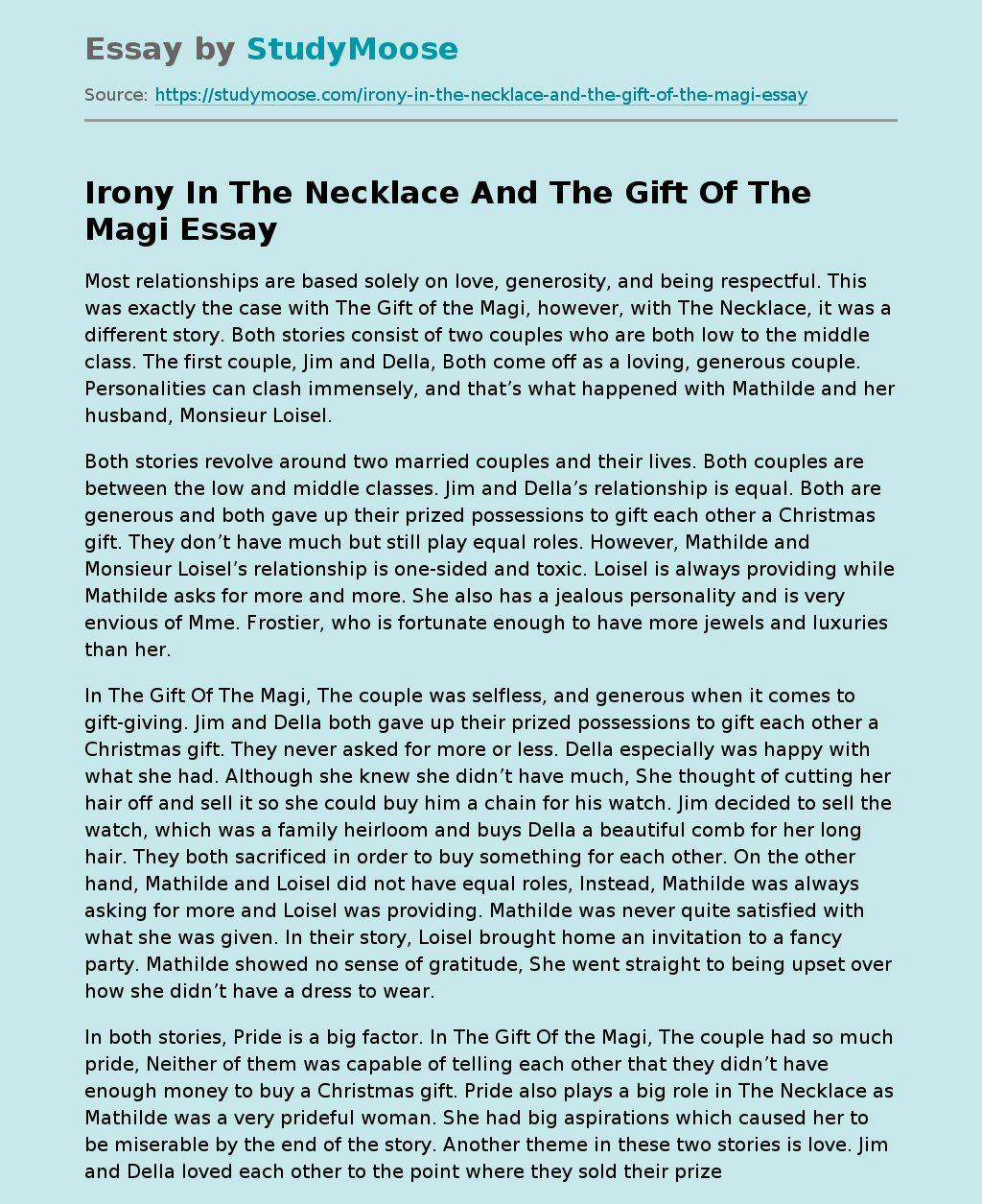