Irony in "The Lottery" by Shirley Jackson

The use of irony in this passage is quite funny because the name of the passage is “The Lottery” and that would make most of us think sense that story is about the draft. Threw-out the story the irony keeped the readers intrigued. The story is about a small village or town and one of the ways they try to keep the population down is by stoning someone once a year as annual type of selection process that’s been around for a while around their.

Don't use plagiarized sources. Get your custom essay on
“ Irony in “The Lottery” by Shirley Jackson ”
Get custom paper
NEW! smart matching with writer

“Bobby Martin had already stuffed his pockets full of stones” the irony in this is that this makes no sense to the reader yet because they are just talking about what nice weather have been having. The lottery might be anything because someone has stones for some unknown reason to the reader yet. Including this part here “The men began to gather, surveying their own children, planting and rain, tractors and taxes”. Here it’s just looking about how the reader still has no idea of what’s going on.

It’s confusing on why the men are telling their own children these things like something might happen but we don’t know what yet. Like most of us would understand the planting and the raining but not the taxes. “Their jokes were quiet” what does that tell us that the kids now what’s happening and the writer is just toying with reader at this point.

One other thing that might be implied in the beginning of the story is that the rocks could be some type of currency.

Which seems stupid to us but as you read the story the irony of how the admire the stones. “Bobby Martin ducked under his mother’s gasping hand and ran, laughing, back to the pile of stones”. In this sentence i gathered from the story it shows how much the stones mean to them as the people and as the reader you don’t understand what the lottery is yet. The readers still think its a innocent story about a town and their lottery. As they also said in the story “ Bobby Martin had already stuffed his pockets full of stones” and when they said that ,no one reading the story kn

ew who Bobby Martin was at the time of the story so he could had been a rich leader. As they were maybe explaining his health and the irony is that it could had been the story at the time going threw your head as a reader. As the reader you would never had guess what all the stones meant like as it said the lottery you could have thought that it’s like winning the lottery in today’s society and the stones were the currency. It shows how the simple things really are.

A really good part the story/passage is that irony comes in so fast and it intrigues you from the moment you start reading the story. The name of the passage already throws you a bone and you think it might be about world war 2 or today’s lottery but it puts a very intriguing twist to the plot. Once you notice what’s going to happen you, realize it’s gonna take a turn for the worst and it was right in front of you the whole time. Now that you notice someone is going to die a horrible death in the story it makes you think on the irony that you could of thought the lottery could be bad or semi bad because it’s war and you get to fight for your country.

Could have been the lottery in today’s society and would have been a more happy ending to the story but the irony keep that from happening. Also could have been about the world war 2 draft since the story was from around that time of the draft. Threw-out the story the irony keeped the readers intrigued. If it was a population thing why didn’t they chose a more effective way than stoning one person to death annually every year.

Irony in "The Lottery" by Shirley Jackson. (2021, Aug 03). Retrieved from https://studymoose.com/irony-in-the-lottery-by-essay 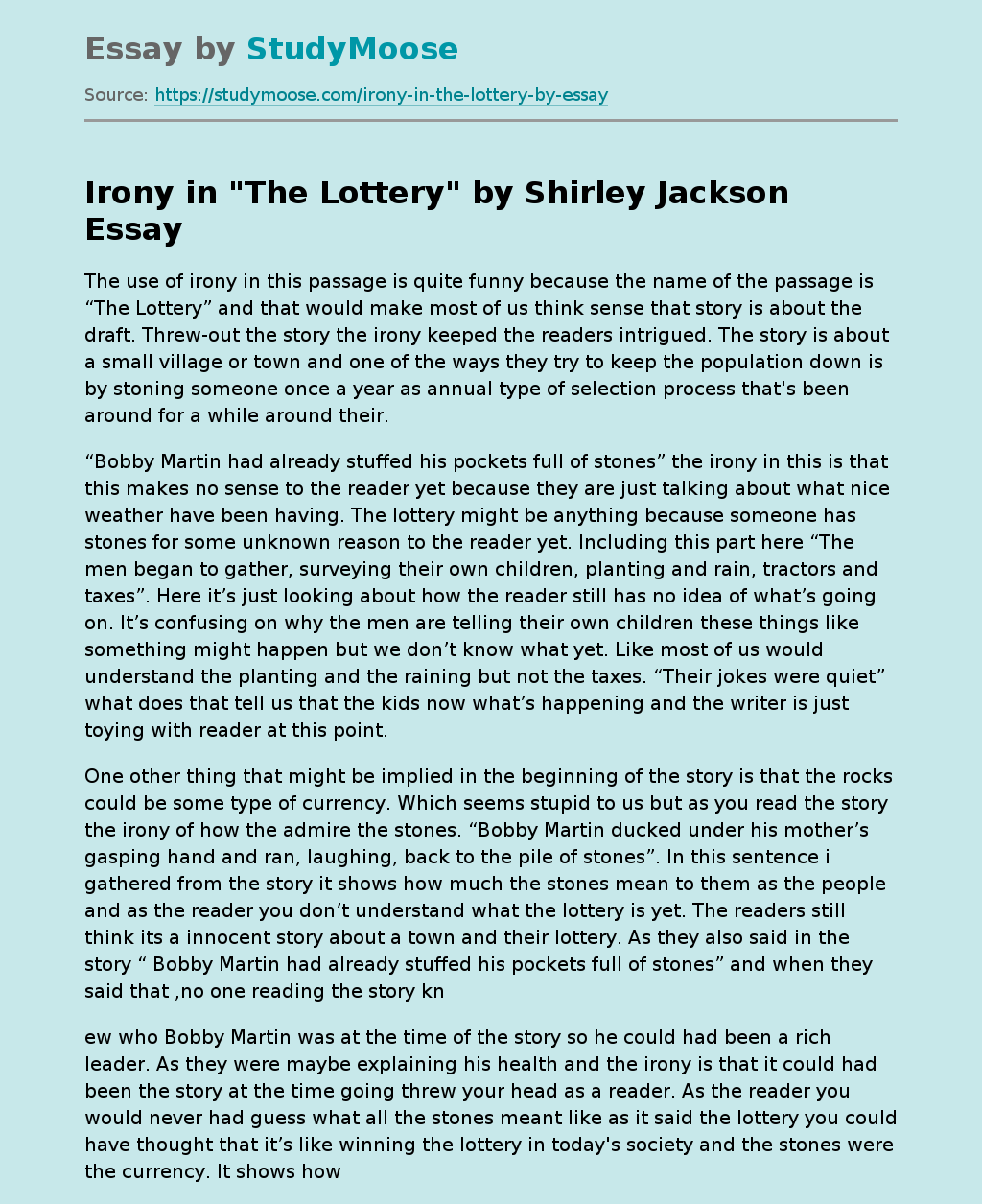