The two concepts of “tradition” and “dissent” are extremely useful in understanding the built heritage of Ireland. To understand the differing attitudes to the built heritage of Ireland is to contemplate the historical accounts, stories and legends that fabricate traditions and incite dissent. The concept of tradition is associated with the passing down through generations, beliefs, thoughts and actions (“tradition”, n. d) and dissent derives from a desire to publicly protest against the traditions and against those holding the authority (“dissent”, n.

Don't use plagiarized sources. Get your custom essay on
“ Ireland Tradition and Dissent ”
Get custom paper
NEW! smart matching with writer

Ireland, ‘the land of saints and scholars’ (Burke, Watson, and Laurence, 2008), is a country coming to terms with its past by acknowledging the wealth it possesses within its built heritage. A past fabricated with tradition and dissent which resulted in the creation of The Irish Free State in 1922, known today as The Republic of Ireland (Hachey, 1996, p. 167). Attitudes to Irish built heritage have been fashioned through the experiences of a people caught in the tides of both tradition and dissent.

From the Anglo-Norman invasion in the 12th century to the creation of the Irish Republic, in 1922, Ireland had been battling with an apparent drive by Britain to ‘anglicise’ the isle. Celtic traditions encounter British dissent. Eventually, The Reformation of the 16th century secured a British dominance and thus, new colonial traditions were formed. Oliver Cromwell ensured his ‘plantation’ policies were implemented, whereby, the Irish- Catholics were ‘expelled’ from their lands and the British now landlord over the real estate and its subservient, Irish -Catholic tenants (“Cromwellian-Conquests, n. ).

161). The Irish traditions, by way of religion and culture, now became the dissent (Hachey, 1996, p. 16). Built heritage is a way to visualise the changes that endure tradition and dissent within society. Architectural structures shaping a landscape by reflecting function, wealth, culture or just personal tastes and fashion.

Monuments, churches, houses, ring forts are examples of built heritage in Ireland. Nationalists were able to use the power of the most historic and revered sites to remember the days of a common Gaelic past to restore a sense of nationalism (Laurence, 2008, p. 164). One of the most recognised sacred sites by the Irish people is Newgrange, built 5200 years ago, the oldest known astronomically aligned structure in the world (Burke, Watson, and Laurence 2008). Tradition was questioned when Newgrange was restored in 1960’s by Professor Michael Kelly.

He used his own controversial interpretation of how the structure would have appeared by the use of stone on the frontage and its overall appearance. The structure now appears as a 1960’s view of a sacred and traditional site (Burke et al. 2008). In the middle of the 20th century, it is intriguing to see the emphasis place on the sites of “ancient places and sacred spaces” (Murphy, as cited in Burke et al. 2008) rather than other structures built whilst under British rule.

The Hill of Tara, located in County Meath, is the symbolic capital of Ireland and the seat of ancient high kings. The site became an Irish nationalist symbol when Daniel O’Connell, a nationalist leader, assembled over 500,000 people at the site to protest against the lack of civil rights for Catholics and the oppressive interests of Anglo-Irish landlords (Laurence, 2008, p. 159). This protest resulted in the Catholic Relief Act 1829, whereby, for example, Catholics were now able to sit as members of parliament in Westminster.

However, as the majority of Catholics were unable to afford a political career due to the position being unsalaried and parliamentary sessions were held at Westminster, London; the opportunities in politics were very unlikely (McCaffrey, 1996, p. 27). This small step to independence by a group of dissenters was able to use the built heritage site of Tara to invoke within the Irish people a sense of their lost traditionalism and new found fervor for nationalism (Laurence, 2008, p. 159).

Nevertheless, the continual dominance of British rule saw no substantial social and economic changes for Catholics as they were still”steeped in habitual misery” (Finn & Lynch, 1995, p. 24). At Daniel O’Connell’s burial site, his supporters erected the tallest round tower in Ireland. The round tower is a historical symbol of Irish Christianity. This enabled dissenters to create new traditions to speak to future generations through the visual power of a symbolic monument.

At his request, O ’Connell’s heart was buried in Rome, the home of the Catholic Church (Burke et al. 008) By the beginning of the 19th century, the Cromwellian policies of plantation and land confiscation were evident on the landscapes of country estates. Landownership was the domain of the privileged minority. In 1804, up to 10,000 landlords, within a population of 5. 4 million, were almost exclusively Protestant; only 5% of land in Catholic hands (“History of Landed Estates in Ireland, n. d). This leads to another asset to the built heritage of Ireland, known as “The Big House”. The Big House is the country residence of the landlord.

At the beginning of the century, over 4,000 Big Houses glorified the landscape. Today, the number is less than 100. These grand houses, many built during the 18th century ‘golden age’ produced the most ornate and sophisticated architecture, together with highly crafted workmanship. The presence of these houses reflected the social and economic dominance over the generations of ‘landed’ Anglo-Irish families (“History of Landed Estates in Ireland, n. d). On creation of the Republic, the Big House was deemed a domineering symbol of Anglo-Irish oppression.

The civil war 1916-1923 had resulted in approximately 300 houses being burned for political or military reasons (Burke et al. 2008). Social chaos stirred on by agrarian agitators may also have lead to the abandonment of other houses and the perception of “reversing Cromwellian policy”(Dooley as cited in Burke et al. 2008) resulted in the destruction of The Big Houses as justification of British oppression (Burke et al. 2008). Various Land Acts after the civil war caused the power of the Anglo-Irish landlord to diminish (“History of Landed Estates in Ireland, n. ).

As a consequence of civil war, the collateral damage of war-torn buildings scarred the streets in Dublin. The Office of Public Works undertook a rebuilding program for some integral, functional buildings, for example, the General Post Office and the Customs House (Burke et al. 2008). These traditional buildings, built under the control of British authority were to become iconic within the new Republic.

The General Post Office was an emotive building which served as the base for nationalists during the Easter Rising 1916 and thus, out of an act of issent against the ruling British , nationalists were to see the formation of new traditions; a new republic rise out of the rubble. At the time of reconstruction after civil war, the National Monuments Bill ensured the protection of heritage sites built after 1700 and only Irish materials would be used in restoration work. This creation of new tradition, written in law, is evident on The Customs House. The rebuilding of the prominent dome, atop The Customs House, with dark Irish limestone appears to overpower the white English Portland stone.

The image evokes a feeling of nationalism over colonialism – dissent over tradition (Burke et al. 2008). On the other hand, other buildings were left abandoned for emotive as well as economic reasons, due to their connections with British rule. Examples of this neglect were Dublin Castle, the seat of British power and The Royal Hospital Kilmainham, a former military hospital and a home for retired British soldiers until 1927 (Burke et al. 2008). The two abandoned buildings, along with the Big Houses, were the symbols of colonial rule and colonial traditions.

The oppressive conditions the Irish had to contend with for so many generations were witnessed through these buildings. Colonial traditions of built heritage, seen as scars on the landscape, seem to have eroded with time as a synergy is formed between the perils of the past and the creation of a country’s identity, to be worn as a sense of pride (Burke et al. 2008). A turning point for the built heritage of Ireland, being appreciated as a valuable asset of the past, occurred at the time of inauguration into the European Community in 1973 (Burke et al. 2008).

Acceptance of the Republic’s own identity and worth on the world stage seems to have empowered Irish society to value its rich past alongside its built heritage. Within the past twenty years, the Irish Republic’s economic and social confidence has resulted in the proliferation of restoration works on many historic landmarks of the city. The attitudes invoke a feeling of ‘moving on’ from a difficult, complicated past and this reverberates through the stone (Burke et al. 2008). The once abandoned Dublin Castle is now a majestic place where the inauguration of the President occurs and state functions are held.

The Royal Hospital Kilmainham, now the site of the Irish Museum of Modern Art, a historic building utilised as a creative space to represent the future (Burke et al. 2008). The past dissent is used as a platform to reinvent the city and to showcase the wonders of its traditional craftsmanship and local materials. The architecture and craftsmanship of the Big Houses are today being recognised also as highly valued from cultural, historical and educational viewpoints (O’Brien and Guinness, 1993, p. 11). Today, restoration of the houses shows an appreciation of the ‘golden age’.

Support from the Irish Georgian Society and The Heritage Council enables the homes to be opened to the public and for the owners to be educated in proper restorative practices (“Irish Georgian Society”, 2010; “The Heritage Council”, n. d). Today, Ireland’s built heritage from Newgrange to the Museum of Modern Art is being seen by the rest of the world for its architectural glory and historic significance as well as contributing to contemporary society. Moreover, to understand the attitudes to the built heritage of Ireland is to accept that the concepts of tradition and dissent are very useful.

The views of a traditionalist or the views of a dissenter cite opposing attitudes to their built heritage. The visual nature of built heritage enables the attitudes of the people to be reflected in the way they revere or revile the society in which they live. Irish dissent rising from the dominance of British tradition has developed through time the sense of pride and the nationalism of a Republic. This vision of nationalism now empowers the people to be trusting caretakers to their own built heritage. 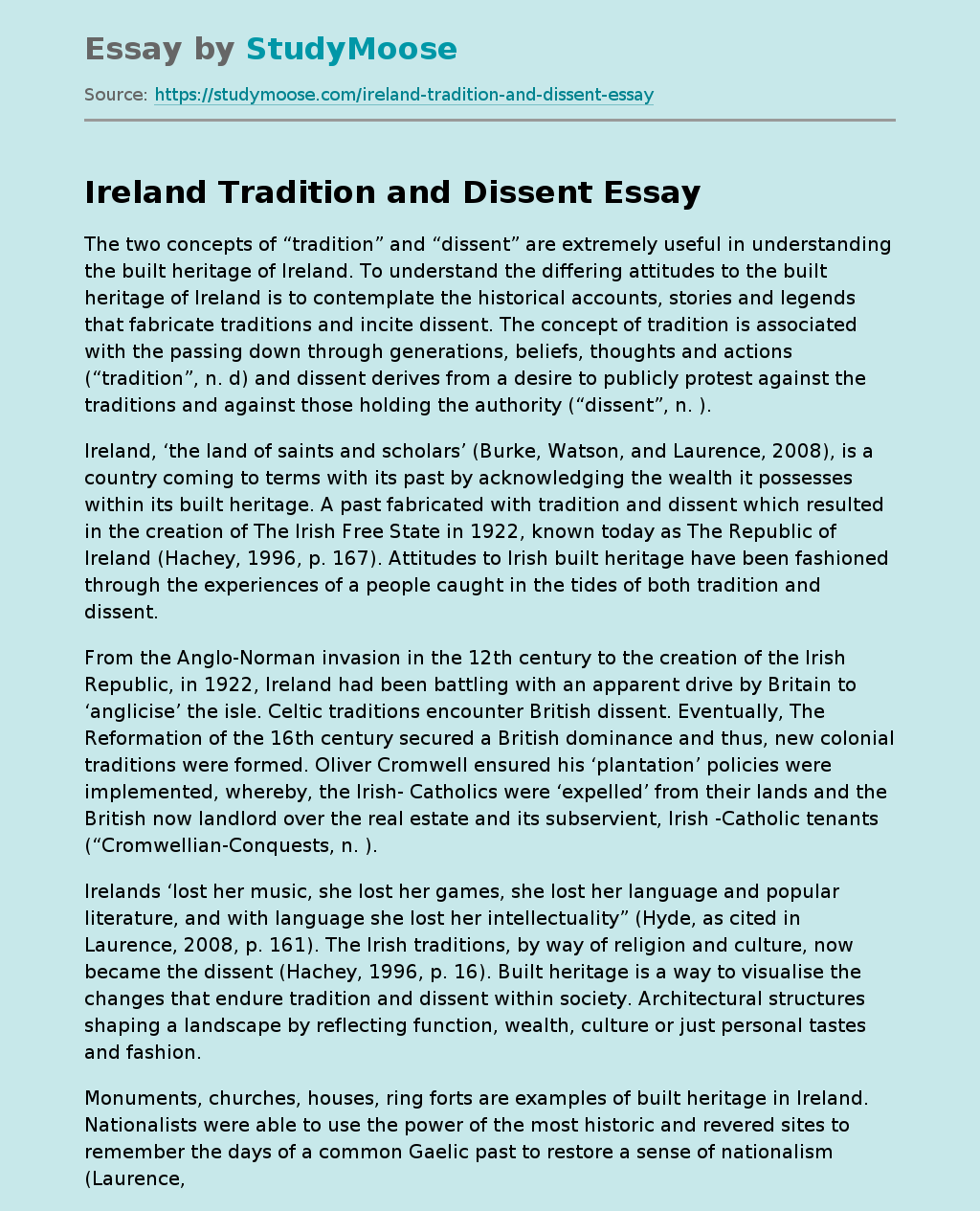