Jane and Steve have been married for five years. Steve lost his job a year ago and has been unable to find employment since then. Jane is a successful hairdresser. Steve has lost his self-confidence and has become so depressed that his doctor has placed him on medication. One evening Jane arrives home at midnight and Steve instantly accuses her of having an affair. Jane denies it, laughs and says, “it would serve you right if I were, you’ve become the most boring man I have ever known” Steve falls into a depressed state again and goes to sleep that night by himself in the spare room.

Don't use plagiarized sources.
Get Your Custom Essay on Involuntary Manslaughter Case Study Just from $13,9/Page

Two nights later Jane is again very late arriving home. Steve asks for an explanation but Jane just laughs at him and tells him not to be so jealous. Immediately Steve flies into a rage and punches Jane as hard as he can in the face. She falls backwards, striking her head on the corner of a table and dies.

The Actus reus for murder is the “Unlawful killing of another human being under the Queen’s Peace.” The mens rea is “malice aforethought”. This is intention to cause death or Grievous bodily harm. Steven has both the mens rea for murder because he has intention to cause GBH. We can prove this because he punched Jane “as hard as he could” in the face. In order to find Steve liable for Jane’s death, the prosecution must prove that Jane’s death was a result of Steve, the defendant’s act. To establish causation the actions of the defendant must be a factual and a legal cause of the defendant’s death.

To prove the factual cause the court would use the “but for” test. Here it would be held that Jane would not have died, “but for” the act of Steve. The “but for” test can be seen in the case of Pagett. The court could also prove legal causation in that the act was “reasonably foreseeable, i.e. it was likely that if the defendant hit Jane she could fall and hit her head.

There are two possible defences available to Steve in this case which are, diminished responsibility and provocation. Diminished responsibility is contained within section two of the Homicide Act 1957. It is defined as an “Abnormality of mind”. Abnormality of mind can arise from three areas, “a condition of arrested or retarded development of mind, any inherent causes or induced by disease or injury”. In this case it could be argued that Steve was suffering from paranoia in the he “instantly accuses Jane of having an affair” or depression as he was placed on medication by his doctor.

These are both inherent causes, Anthony Martin. It could also be argued that the defendant was provoked. Provocation exists at common law but is also contained under section three of the Homicide Act 1957. To establish provocation the jury must be able to find the person charged was “provoked by things said or done or to a sudden loss of self control enough to make a reasonable man do as he did.” In this case the things said or done were Jane laughing and taunting the defendant, also the fact that she said it would serve him right if she had an affair as he was the “most boring man” she’d ever known.

This may be considered as cumulative provocation which the jury may consider Humphreys 1995. The test for loss of self control stems from Duffy, there was a sudden loss of self control as Steve “immediately” flew into a rage and it was “sudden” as there was no cooling off period as in the case of Ibrams and Gregory. The case of DPP v Camplin stated that the question is not whether a “reasonable man” in similar circumstances would be provoked to lose his self-control but also whether he would “react to the provocation” in the way the accused did. In this case the victim laughing and simply telling the defendant not to be jealous may not be sufficient enough provocation to justify the defendant punching her as hard as he could in the face.

A reasonable man of the same age and sex of the defendant, DPP v Bedder, would probably not have acted in this way. It is possible that Steve is Liable for the Murder of Jane as there is no break in the chain of causation, however the conviction may be reduced to involuntary manslaughter on the defence of diminished responsibility. It is questionable whether Steve could rely on the defence of provocation as it is unlikely he reacted to the provocation in the same way as that of a “reasonable man”. 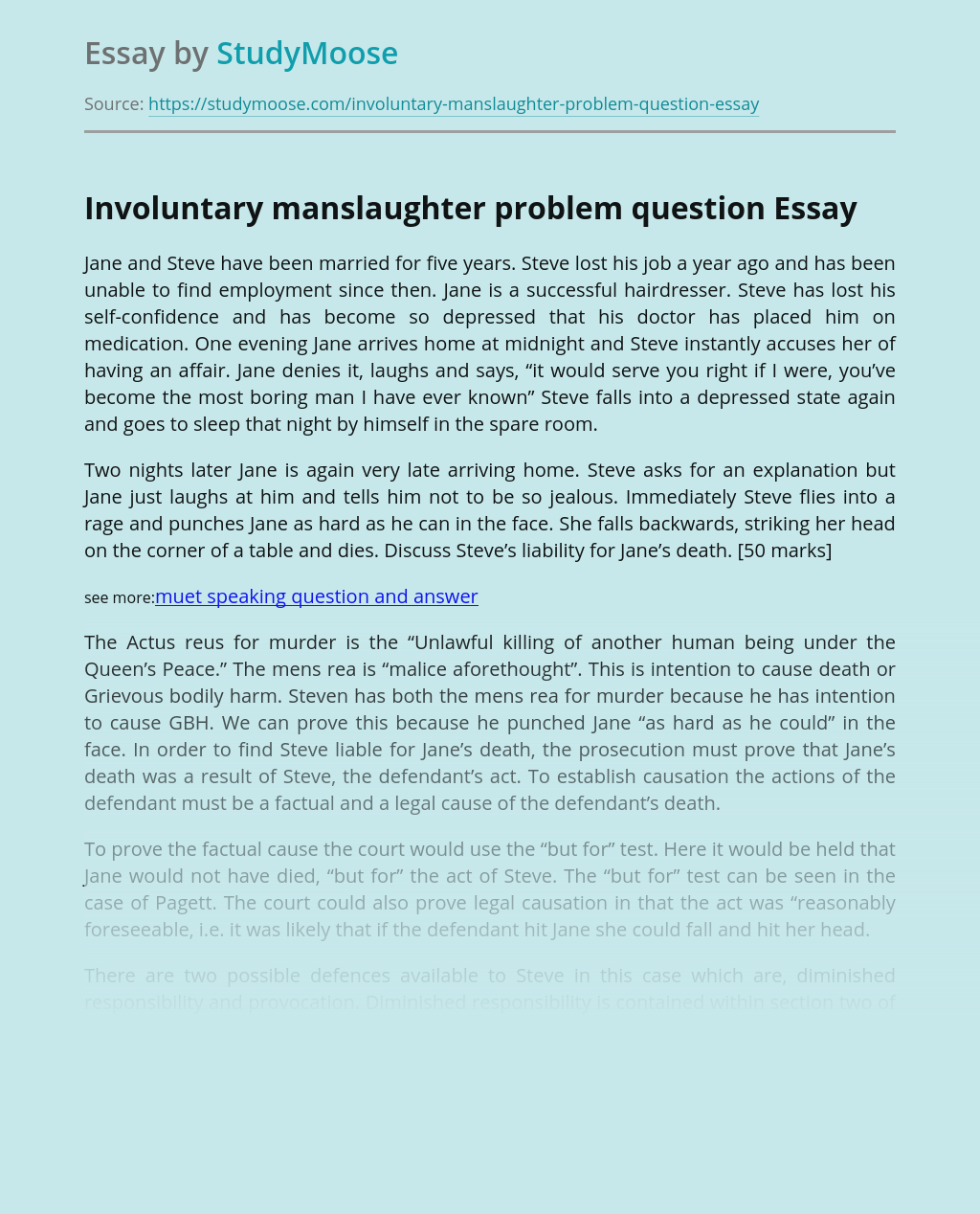 Historical Context: First published in England in December 1884 and in the United States in February 1885. Naturalism (c. 1865-1900) A literary movement that used detailed realism to suggest that social conditions, heredity, and environment had unavoidable force in shaping human character. Protagonist: Huckleberry Finn was young boy in the late nineteenth century coming of...

Jeffrey Sachs was a professor of Economics at Harvard for 38 years and was a major consultant for many nations. He now heads the Earth Institute. His views on the causes of poverty are very different than what is normally thought or presented. His book has 18 chapters which are broken down as follows: •...

Get Essay
Details of Renaissance Paintings by Andy Warhol

Andy Warhol’s piece titled Details of Renaissance Paintings, speaks to the substance of the goddess Venus. This piece was made in1984 as a portrayal of the substance of Venus from the prior painting The Birth of Venus by Sandro Botticelli that was finished in 1482. The piece’s available area is the Arkansas Arts Center, and...

The Dairy Company is proud to be one of the most successful companies in the country that provide milk-based products to Australian customers as well as oversea. As we look at the future of the company, it is necessary to restructure the company body frame, strengthen employer-employee relation, the main endowment factor of our company....

Organizations Today Are Faced With Many Issues

Organizations today are faced with many issues. A major challenge is dealing with and determining a code of ethics. Ethics involves the study of moral issues and choices (Kinicki, 2009). Many organizations today are faced with unethical behavior that occurs throughout the company. Ethical and unethical conduct is the product of a complex combination of...