Batholith: A large emplacement of igneous plutonic rock, formed by magma cooling deep in the Earth’s crust. Buoyant magma pushes up through the country rock, partially melting it, and then cools. A good example is the Cornubian batholith in south-west England, which has broken through the surface to form the well-known granite structures of Dartmoor and Bodmin moor, among others. Sill: A tabular sheet intrusion where magma has intruded between older layers of sedimentary rock, beds of volcanic lava or tuff, or even along the direction of foliation in metamorphic rock.

Turn in your highest-quality paper
Get a qualified writer to help you with
“ Intrusive and minor extrusive features of vulcanicity ”
Get high-quality paper
NEW! AI matching with writers

Good examples are the Salisbury crags in Edinburgh, which are formed by a sill partially exposed by the ice age. Dyke: Similar to a sill, except the lava has intruded along cracks and faults in one particular rock type. It cuts across layers, or through one layer or an unlayered rock, rather than intruding along the boundary between layers.

A good example is the Kildonan dyke swarm- formed by a single volcanic event located around the Scottish Isle of Arran.

Laccolith: Where magma has been injected between two layers of sedimentary rock, and the pressure of the magma has been high enough to force the overlying strata upwards, creating a dome/mushroom shape on the surface. Extrusive:

Geyser: Where water works its way about 2000m down into the rock, where due to the close proximity of the magma it is heated up. The pressurized water is now boiling causes it to spray spectacularly out of the geyser vent, as famously seen at Old Faithful in Yellowstone National park.

Less well-known Geysers can be dangerous however, as boiling water can be thrown very high and in all direction. Mudpool: Or mudpots, form in high-temperature geothermal areas where water is in short supply.

The little water that is available rises to the surface (as with a geyser) at a spot where it mixes with the soil. The soil is normally rich in volcanic ash, clay and other fine particulates. Good examples can be found at Rotorua in New Zealand. Some mudpools are thought to be good for the skin and can be very relaxing, however the more explosive and hotter mudpools can be dangerous. Basaltic lava flows: Highly fluid molten basalt intrudes through sedimentary rock beds to form an extensive lava plateau. As the lava cools rapidly, contraction occurrs.

Horizontal contraction fractures in a similar way to drying mud, with the cracks propagating down as the mass cools, leaving pillarlike structures, which are also fractured horizontally into “biscuits”. The size of the columns is determined by how long the lava takes to cool. A particularly notable is the Giant’s causeway in Ireland, where the sedimentary rock was chalk. 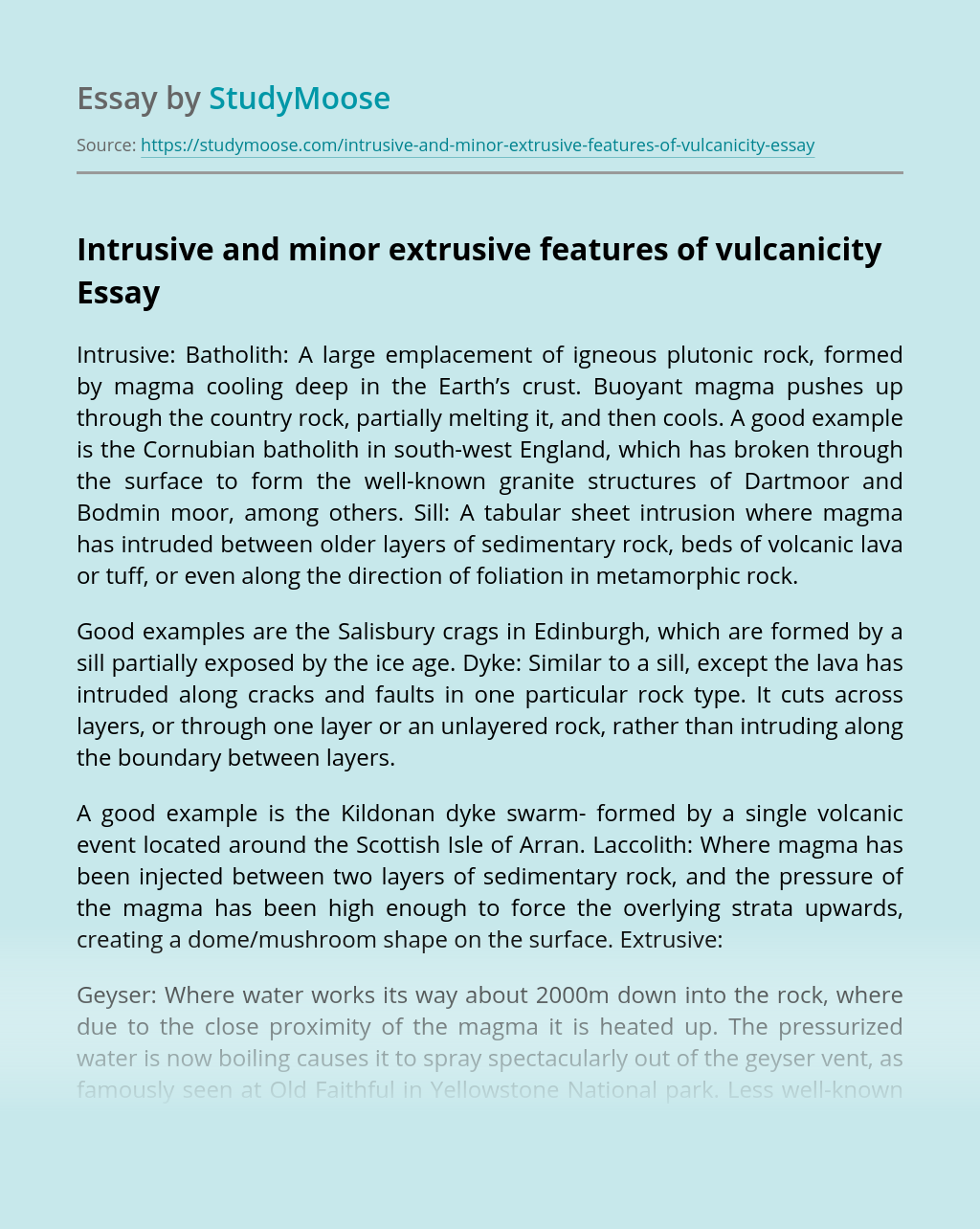 Turn in your highest-quality paper
Get a qualified writer to help you with
“ Intrusive and minor extrusive features of vulcanicity ”
Get high-quality paper
Helping students since 2015
Stay Safe, Stay Original