Into thin Air and To Build a Fire

Nature is the natural force that governs life: weather and events beyond the control of man. Nature is utterly indifferent to man. Even though man cannot control nature, man can defeat nature. However, human errors can cause nature to defeat man. The two main guides, Rob hall and Scott Fischer in Into thin Air and the Man in “To Build a Fire” errors played a huge role in their battle against nature. In Jon Krakauer’s Into Thin Air and Jack London’s “To Build a Fire”, man’s propensity to underestimate nature’s strengths and excessive pride led to nature’s victory.

Don't use plagiarized sources. Get your custom essay on
“ Into thin Air and To Build a Fire ”
Get custom paper
NEW! smart matching with writer

Proficient in: Into Thin Air

Scott Fischer’s tone shows that he is underestimating nature’s strength because he ruled out the perilous obstacles the climbers would encounter while summiting.

In addition, in the story “To Build a Fire”, the man’s tendency to underestimate nature caused him to lose his battle against nature. While traveling through the Yukon, the man encountered the severely cold weather. However, he continued to travel because he believed he could defeat the weather. Jack London writes “Fifty degrees below zero meant eighty odd degrees of frost. Such facts impressed him as being cold and uncomfortable and that was all.

It did not lead him to meditate upon his frailty as a creature of temperature…”, (Jack London, pg. 1).

The man’s thoughts illustrates that he is underestimating nature’s ability due to lack of knowledge on the fragility of humans; humans always need to be in a stable environment. However, he believes he can survive in fifty degrees below zero temperature without facing any serious life threatening conflicts. In Into Thin Air, lead guide Rob Hall’s excessive pride caused nature to win. The expedition was full of people who were extremely prideful. Rob Hall was one of the most prideful people on the expedition. Author Jon Krakauer recalls a comment made by Rob Hall during the expedition.

He states that hall “bragged on more than one occasion that he could get almost any reasonably fit person to the summit”, (Krakauer, 284). This description proves that Rob Hall is extremely prideful because he completely disvalues the risk aspects of climbing to the top of Mount Everest. Furthermore, Rob hall’s pride led to the down fall of the expedition. When Rob Hall guided everyone on the 1995 Mount Everest expedition safely, he was sure he could guide another expedition and have the same outcome as the 1995 expedition.

In the end of the novel, the author states “ After everyone came out of that summit attempt alive, Hall may have well thought there was little he couldn’t handle”,(Krakauer, 284). Rob Hall’s thought illustrates that his pride led to the down fall of the expedition because he did not acknowledge the fact that every expedition is different. Climbing a mountain is extremely unpredictable. He made an enormous mistake by believing from the 1995 expedition. In “To Build a Fire”, the man’s excessive pride leads him into conflict when he does not heed the advice of others who had experience similar situations.

Jack London writes “All this the man knew the old-timer from sulphur creek had told him about it the previous fall, and now he was appreciating the advice”, (Jack London, paragraph 20). This description illustrates that the man, in his egotistic mind, never believed he would encounter any obstacles and disregards the old-timers advice. It is not until he encounters a hazardous problem that he truly sees the significance of the old-timers advice. In the novel Into Thin Air, man’s propensity to underestimate nature’s ability allowed nature to beat man.

Scott Fischer’s comment regarding the summit allowed nature to beat man because it made the climbers lower their guards and not focus on the things that could go wrong while summiting. His comment probably convinced many climbers that climbing Mountain Everest was extremely easy and that they didn’t have put their all in climbing because they had a perfect guide who had everything figured out. If Scott Fischer had focused on things that could go wrong and made a plane, then they would have been able to defeat nature’s strengths. In addition, in the story “To

Rob Hall, the lead guide of the expedition, had repeated success at getting everyone to the top of Everest. This made him extremely proud. Over time, his pride got the better of him by making him complacent. If Rob Hall had focused on getting the clients to the top safely, then he could have beat nature. However, Hall’s excessive pride caused him to not heed the obstacles him and his clients might have encountered while climbing Everest. Furthermore, in “To Build a Fire”, the man’s pride also allowed nature to beat him. When the inexperienced man arrived at the Yukon, he decided to disregard the advice given to him.

He was so confident that in could survive traveling the severely cold Yukon Territory. If the man had taken the old-timers advice and used it to make rational decisions, then he could have survived. In Into Thin Air and “To Build a Fire”, man’s tendency to underestimated nature’s power and extreme pride allowed nature to defeat man. Nature always pushes man to his limits. It is up to the man’s decisions that illustrates whether man will win or if nature will win. Man is nature’s enemy. One little human error can lead to nature’s victory.

Into thin Air and To Build a Fire. (2016, Jul 21). Retrieved from http://studymoose.com/into-thin-air-and-to-build-a-fire-essay 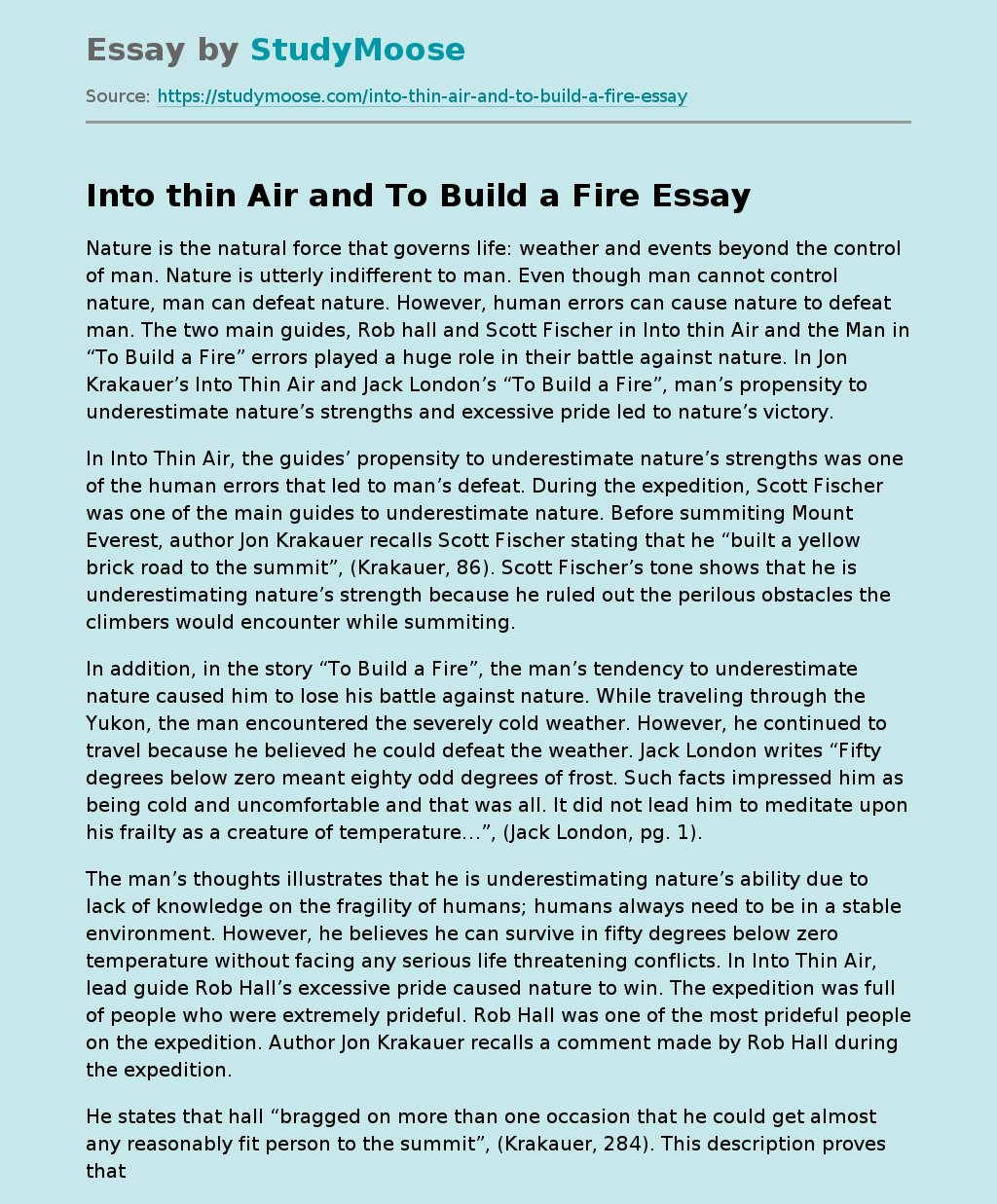