Into the Wild Analysis

It is difficult in the start Into The wild by Jon Krakauer to grasp why Chris Mcandless would go into the Alaskan wilderness so unprepared. Chris is dynamic character at first appearance but can be summed up pretty easily. Chris is a spoiled and ignorant kid that can’t handle the pressure of modern day society so makes an attempt to live a simple, nomadic life style, which includes a fatal trip into the Alaskan wilderness. Chris realizes from his experience that society today is way better than it has ever been in the past.

Don't use plagiarized sources. Get your custom essay on
“ Into the Wild Analysis ”
Get custom paper
NEW! smart matching with writer

Several factors contributed to Chris McCandless’s death. Chris was very ignorant, refusing to accept any helpful items people offered him. He underestimated the full strength of the Alaskan wilderness. Also, he did not pack enough supplies for the nearly four month endeavor. Chris’s ignorance can also be described as arrogance when he says “I won’t run into anything that I can’t handle on my own”.

Another quote from the book that emphasizes Chris’s arrogance is “Gallien offered to drive Alez all the way to anchorage, buy him some decent gear and then drive him back. . “How is it that a kid with so much compassion can cause his parents so much pain”. It is because Christopher Mcandless was spoiled. Chris before his adventure was just a kid who didn’t like his parents so he wanted to cause them pain and prove to himself that him and his parents were on different levels of intelligence, Chris being above them.

They clearly were, but the opposite of what Chris thought, seeing as though dad was a rocket scientist.

Chris’s attitude throughout the book was no matter what he does its his parents fault, they messed up their kid and made him the way he is, which is logically true, but with a smart as Chris was this must have taken a real toll on his self esteem, just accepting the fact that he cant take responsibility for his own life. If Chris had been taken to a phycologist all of his problems could have been easily avoided when this concept was addressed head on, but he wasn’t so he died by himself on a bus in Alaska.

When Chris planned on leaving the wild in late July he came to the realization that he was the stem of all of his problems. When he says “…henceforth will learn to accept my errors, however great they be…”. “I have lived through much, and now I think I have found what is needed for happiness. A quiet secluded life in the country, with the possibility of being useful to people to whom it is easy to do good, and who are not accustomed to have it done to them. ” When thought about this quote is really sad the fact that Chris wants to constantly do good for people but wants to cause grief for his parents. So many people live within unhappy circumstances and yet will not take the initiative to change their situation because they are conditioned to a life of security, conformity, and conservatism, all of which may appear to give one peace of mind, but in reality nothing is more dangerous to the adventurous spirit within a man than a secure future. ” The problem with Chris is he doesn’t realize that society has evolved to where it is today, it sucked to be alive 1000 years ago compared to today and that is clearly seen when looking at society.

Humans always stride to buy a newer and better, car, house, phone and basically everything else, because newer things are better things. So why would Chris think this is any different with society. People have been striding to have secure futures since the beginning of man and now that we live in a society where a secure future is a feasible he’s saying it takes away from the adventurous spirit within a man, well the answer to that is yes, it 100 percent takes

Into the Wild Analysis. (2020, Jun 02). Retrieved from https://studymoose.com/into-the-wild-analysis-essay 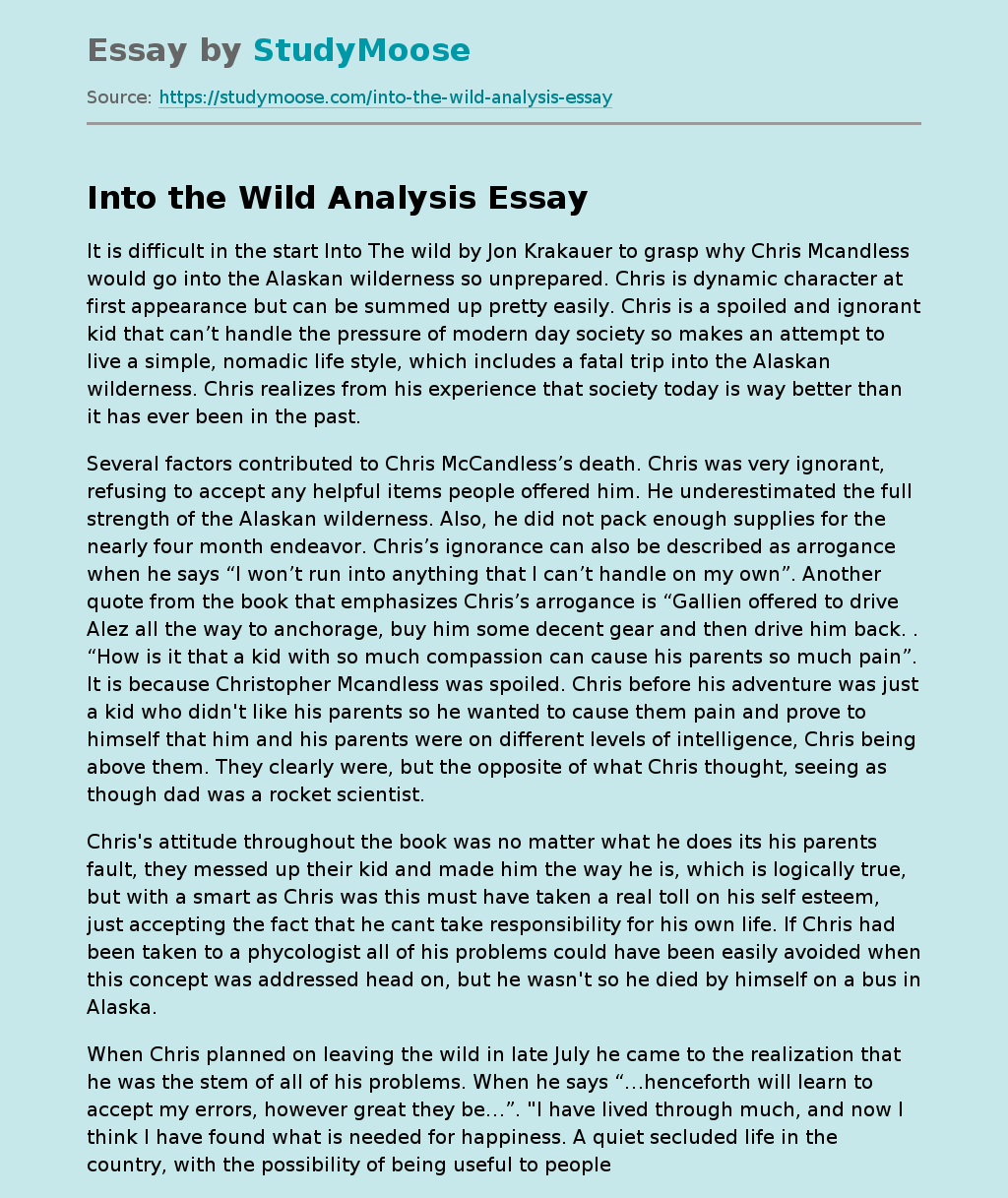