Don't use plagiarized sources. Get your custom essay on
“ Intimate Partner Violence on College Campuses ”
Get custom paper
NEW! smart matching with writer

Dating violence affects college-age people more than any other age group in the United States, although many cases go unreported because the victim is either too afraid or simply does not realize that they are being abused until it is too late. It is important to know the symptoms and behaviors that indicate abuse in relationships, as well as, the ways in which a person can give or receive help on their college campus.

Intimate partner violence can create long-term problems for victims and in extreme cases even death.

Intimate Partner Violence is a major problem all over the world that is slowly becoming a more mainstream concern. IPV is defined as threatened, attempted, or completed physical or sexual violence or emotional abuse by a current or former intimate partner (Shannon 51). One in five students has experienced IPV, a statistic that directly correlates with the findings of the U.S. Department of Justice on student victims of sexual assault. Although just as with sexual assault many instances of IPV go unreported so it is likely that the number is significantly higher.

However, Lisa Maatz, vice president of government relations at the American Association of University Women, admitted that domestic violence is often less talked about than sexual assault. Some activists believe that IPV is not taken as seriously as sexual assault unless the victim is seriously injured or killed. “College dating violence victims are often dismissed as being young and inexperienced”, says Dana Bolger, co-founder of Know Your IX, this is because when people think of IPV, they think of married couples with children not first – time relationships. I want to continue to raise awareness about IPV and the long-term effects it has on victims. IPV can affect men and women, although women are more likely to be victimized and male victims are often ignored or are not taken as seriously as their female counterparts. Male victims are also more likely to ignore signs that a partner is abusive because most cases of IPV with male victims occurs within the small, close-knit LBTQIA community.

Some symptoms of abuse can include extreme jealousy, victim blaming, harassment of the victim at work or school, cruelty to animals, and many others. IPV usually starts with emotional abuse or possessiveness, and later progresses to more physical or financial forms of abuse. The abuser can also appear to be pleasant or charming in public or seem like they are perfect when they first meet the victim. Abusers often minimize the seriousness of the abuse to make the victim feel like they would be being dramatic if they attempted to get help. The abuser may externalize the causes of the abuse, such as blaming the violence on stress, the victim’s behavior, substance or alcohol abuse, or they that had a “bad day”.

IPV can lead to a long list of problems even after the relationship has ended or the abuse has moved on or been arrested. Victims who have been made to feel dramatic or crazy when they acknowledge the abuse or attempt to get help can develop a sense of helplessness or feel like they deserve the abuse, which often leads to abuse in future relationships. Victims can also suffer from mental health issues such as depression, anxiety, complete emotional withdrawal or dissociation and in some cases suicide. They can develop posttraumatic stress disorder, which in turn can lead to disturbed eating or sleeping patterns, substance abuse problems, hypervigilance, obsessive-compulsive – disorder, impulsivity and increasingly reckless behavior in an attempt out run the trauma. Some victims cope by minimizing the abuse, subconsciously suppressing the memories or denying that it ever happened because they find it easier than dealing with the impact of the abuse. This is also one of the reasons that most victims don’t come forward, decide not to testify against their abusers or decide to stay in the relationship.

Other barriers to leaving abusive relationships or testifying against an abuser include fear of not being believed, isolation, financial dependence, guilt or shame that they are “allowing” the abuse to happen, hope that the abuse will stop, community, and societal values, emotional and physical impairment, and cultural hurdles. For college students who are victims of abuse the fear of not being believed, guilt, shame, isolation, community, and societal values, and hope that the abuse will stop are some of the most prevalent reasons why they do not get help or leave the abusers. Victims on college campuses are often away from home and their families for the first time and many are having their first real relationships. Some victims feel isolated on campus because it is difficult to hide from someone that they share classes or even dorm buildings with, some victims don’t realize that the behavior of their partner is abnormal until it is pointed out by a friend or other outside observer. Some victims are made to feel guilty for “stressing the abuser” during exam times, when they have large amounts of homework, or they just want to relax. Some victims just don’t want to risk the reputation of the abuser or themselves if they try to get help and aren’t believed and some victims hope that eventually when the abuser is under less stress or if they can keep the abuser happy then the abuse will stop.

Victims of IPV in college are more likely to drop out of school and to be homeless later in life than college students who are not. They are also more likely to be victims of IPV in future relationships and to abuse others. Victims of physical abuse are also at risk of developing brain injuries that impair basic functioning and cognitive skills and cause seizures, vision problems, and extreme changes in behavior.

There are many options available on college campuses and laws that are meant to protect against intimate partner violence, but the best way is to stop abuse before it starts. Some ways to do this are to start educating people about IPV at a young age. The idea that if someone is mean to then that means he or she like you also needs to end because it leads to a belief that love equals abuse. It is also important to pay attention to one’s friends and to one’s own relationships so that you can notice symptoms of abuse and get help. A person shouldn’t wait for a friend to come to them before they inform the authorities or intervene. A person should also ask themselves if they are feeling controlled, manipulated, does your partner call you names or put you down constantly, has your partner physically abused you, etc.

Most colleges have centers and programs that are designed to help and educate student victims. For example, Georgia State University has an online education module called Haven that is mandatory for all freshmen. It helps to educate students on the behaviors and signs that indicate abuse and the ways in which it is possible to receive help on campus. I think that formal education about the potential dangers of dating and how to spot them, should begin as early as middle school and that the idea that love is not abuse should start in the home. I want to make a difference in the lives of battered people by spreading knowledge about the ways to get help in abusive relationships. 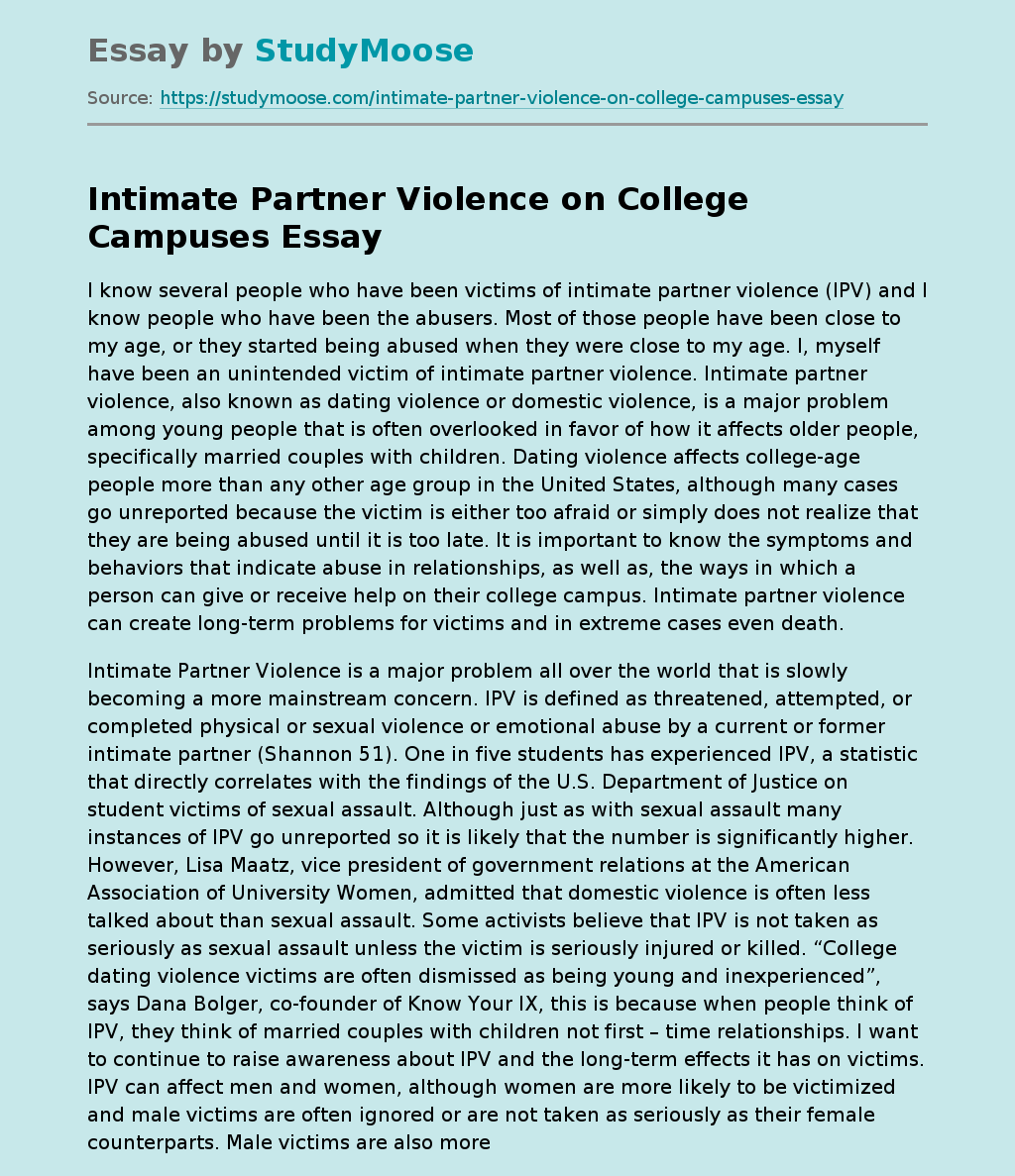