Interview of Friar Lawrence and Nurse

Don't use plagiarized sources. Get your custom essay on
“ Interview of Friar Lawrence and Nurse ”
Get custom paper
NEW! smart matching with writer

He has always trusted me and he told me things he would not have told to anyone else. Romeo respected me and took my advice. I blame myself for his death and I am very sorry. Jury: What part did you play in this tragedy?

I tried my best to unite two people who were very much in love. Yes, I did perform the marriage ceremony but I did it in good faith, I never knew what atrocities it would bring about.

I also tried to help Romeo and Juliet when they were in trouble. After Romeo was exiled I helped arrange his escape to Mantua, for, you understand it might be possible for them to meet there. When I gave Juliet the drug I thought that I was doing the right thing. She was in a mess, she couldn’t tell her parents so with my knowledge of herbal remedies I supplied her with the draught. She would have taken her own life there and then if I had not.

When Romeo was dead and Juliet would not leave him I deserted her. I could have saved her life I know but I was too cowardly to face up to my actions. Jury: What were your motives in this tragedy? I wanted to help a very good friend to be happy and preserve the marriage. I suppose I also hoped that performing this marriage ceremony would help unite the two sides from their conflict. Jury: Whose fault do you think the deaths are? I blame myself more than anyone else. I played the largest part, however, I suppose it would not have happened if there had not been many smaller things contributing.

For example, if there had never been a conflict. Nobody was to know that it would end in death. Jury: What part do you think you were to blame for particularly? I was responsible for setting in motion a series of actions that lead to the marriage, the arrangements for the meetings and the drugs for Juliet. I didn’t save Juliet from herself. Judge:John Henry Lawrence please leave the dock. Anne Falton please mount to the dock. Put your hand on the Bible and say after me, I swear to tell the truth, whole truth and nothing but the truth. I swear to tell the truth, the whole truth and nothing but the truth.

The Jury are now open to ask you questions, you are bound by the book to keep to the truth. Jury: What was your relationship with Juliet? Well, I was almost like a second mother to her, I was her wet nurse you know, she born at the same time as my daughter Susan who passed away God rest her soul. I have looked after ever since. Juliet was always a very nice young lady never doing anything naughty. I was her closest friend she used to tell me all her secrets but she didn’t tell me her plan before she died. Jury: What part did you play in this tragedy?

I knew all the time that Juliet had gone off and married that Romeo, I never knew it would come to this. Romeo was a nice young chap as well. He wasn’t as good-looking or as clever as Paris though, not at all, no! The only other matter I was involved in was organising Romeo’s night with Juliet, that took a lot of organising that did. Jury: What were your motives in this tragedy? All I wanted was to see Juliet happily married with a nice young man. I wouldn’t have been persuaded to take part in this conspiracy but Juliet begged and begged me not to tell his Lordship. Jury: Whose fault do you think the deaths are?

Not mine and that’s for sure, I always said that, that Romeo would lead her up to no good, he looked nice and all that but he had a look about him. I think Romeo lead her into it, he always was the bad sort, coming from a Montague family and all that… Jury: What part do you think you were to blame for particularly? It wasn’t anything to do with me, if I had gone to his Lordship about the marriage she’d have killed herself sure as sure, like the good Friar said she was going to… Judge: Anne Falton, leave the dock. The Jury will now leave to come to a decision. 1 hour later: Verdict: Death by Misadventure.

Interview of Friar Lawrence and Nurse. (2017, Aug 28). Retrieved from https://studymoose.com/interview-of-friar-lawrence-and-nurse-essay 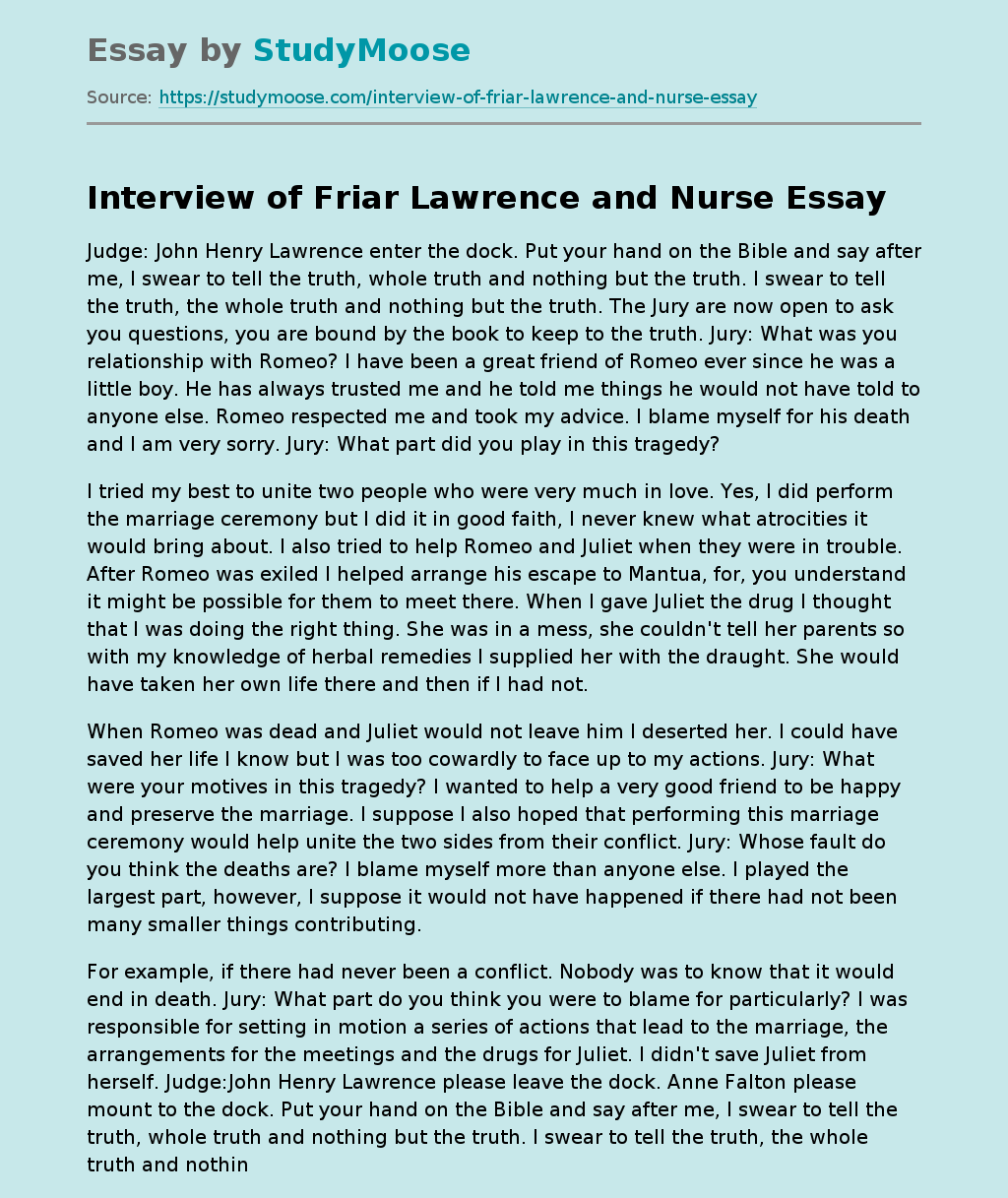