Racial prejudice against the outsiders existed during the Elizabethan Age and Shakespeare attempted to create a parallel world in his tragedy Othello, The Moor of Venice where he captures a wide array of reactions towards a Black Muslim by the white majority Christians in Venice. The racial discrimination has been latent in their minds for a long period and the interracial marriage of Othello and Desdemona acts as a catalyst resulting in a volcanic eruption like calamity in the society through a prototype villain Iago.

The institution of marriage is often looked at as a means of enhancing the bond within a community and when an outsider attempts to become a part of a closed community then he is perceived as an intruder. This essay explores the tumultuous reaction of the society through Iago towards the interracial marriage of Othello and Desdemona. Human beings, once accustomed to a particular pattern, will find it extremely difficult to alter the same.

Othello, the Black Moor with physical and cultural difference in the state of Venice has risen to the position of the army general through his meticulous and painstaking hard work.

Iago, the vicious villain has developed an aversion towards Othello because of his Moorish background and it is intensified when Cassio is promoted to the position of lieutenant, overlooking Iago. Iago also suspects an illicit relation between his wife Emilia and Othello. So he vows to bring the downfall of Othello and takes the interracial marriage as the ripe opportunity to avenge Othello.

He instigates Brabantio, father of Desdemona to bring Othello under trial for luring his daughter. Brabantio openly condemns Othello’s marriage with his daughter and accuses that the marriage is “maimed and most imperfect” (1. 3, 99) and “Against all rules of nature” (1. 3, 101). Further he strongly suspects that Othello has used magic potions on Desdemona and exploited her innocence by pushing her to run from her home to “to the sooty bosom / Of such a thing as thou – to fear, not to delight” (1. 2, 70-71).

Brabantio thus overtly expresses his racist views before the Duke because he is basically a Venetian who is obsessed with racial prejudice and it is so blatantly displayed because he learns that his daughter has fallen for the Moor from Roderigo, the half-wit consumed by lust for Desdemona and Iago, where the later has hidden his identity and has expressed their love affair in the most obscene language as possible. Iago states, “…you’ll / Have your daughter covered with a Barbary horse” (1. 1, 111-112) and “I am one, sir, that comes to tell you your daughter / And the Moor are now making the beast with two backs. 1. 1, 116-117).

As Elizabeth Beaudin notes, “The language Iago and Roderigo use to incite the senator’s anger is clearly prejudiced; they refer to Othello as ‘an old black ram,’ a ‘Barbary horse,’ and a ‘lascivious Moor’ (13). The racist remarks of Iago and Roderigo against Othello reflect the prejudice that existed in the society when a Black Moor holds a better position in the society be it in military, society or the heart of a woman. Both Iago and Roderigo refer to Othello as an animal, thick-lipped, uneducated, and crude, and never call him by his name in private.

Othello is enquired about the charges levied by Brabantio and the Moor responds that their love is mutual which has been nurtured through conversation. He states that “She loved me for the dangers I had pass’d, / And I loved her that she did pity them” (1. 3, 167-168). The Duke is one of the few characters in the play who trusts that the love affair is beyond the narrow lanes of racism and approves their marriage. When both the lovers are found to be in a state of complete bliss Iago remarks, “O, you are well tuned now! / But I’ll set down the pegs that make this music, / As honest as I am. (2. 1, 199-201).

Iago swears to loosen the pegs in order to bring about a disharmony in their relationship. Mussari rightly states, “From the opening scene the interracial marriage between Othello and Desdemona colors all aspects of the play. Race also provides further motivation for the resentful Iago to destroy the general’s happiness. ” (40-41). Iago strongly believes that Desdemona’s love for the Moor is nothing but an unnatural sexual desire and schemes in the most scrupulous manner to infuse jealousy in place of love in the mind of Othello.

Earlier Othello believed that Desdemona loved him for his adventures and he not being a chamberer. But under the poisonous influence of Iago Othello believes that it is the very same quality that has made her leave him. “… for I am black / And have not those soft parts of conversation / That chamberers have, or for I am declined” (3. 3, 263-265) Iago is extremely sly and a master puppeteer who brings almost everyone under his dominion. He convinces Roderigo that h can win Desdemona’s love only by procuring gifts for her and gains monetary benefits from him.

Cassio also blindly believes him and thinks that Iago is striving hard to regain Cassio’s lost position. The seeds of jealousy are sown in the minds of Othello and it has deep-rooted in him. He has made a thorough analysis of Othello’s nature and produces the ocular proof for his wife’s infidelity. Iago is unable to stomach the fact that Othello is not only the supreme commander of the arms but has won the heart of a white Venetian woman. He is absolutely hostile to this interracial marriage and longs to dissolve the marriage at any cost.

Roderigo, Cassio and his wife Emilia are made as pawns who unknowingly play a crucial role in disrupting the harmonious relationship between Othello and Desdemona. Iago goes to the extent of inventing an accusation that his wife is committing adultery with Othello. “… Twixt my sheets / he’s done my office” (1. 3, 380-381). Othello and Desdemona unlike many other lovers establish a mature relationship in the beginning and are convinced that they share a mutual bond of love and affection.

But it is not just the jealousy of Othello that plays a spoilsport. The racial incompatibility is internalized in every human being because humans are essentially social beings and hence are used to living in a homogeneous environment. The sudden intrusion may shock a majority section of the society like Brabantio, Iago and Roderigo. But a few may develop an initial fascination towards this heterogeneity like Desdemona. Desdemona herself is convinced that there is something unnatural about her love for Othello.

She fails to understand Othello completely because of the cultural and racial differences that existed between them. She had once remarked that she fears looking at such blackness as in Othello which is reaffirmed by Othello when Iago states, “seem’d to shake and fear your looks” (3. 3, 207). Both Desdemona and Othello are initially drawn to each other because of their physical appearance but later this difference of Black and White creates a gap between them. Othello is appalled “not only because Desdemona corrupts herself ut because her ‘blackness’ confirms his” (Berry, 328).

The interracial marriage, no doubt, intensifies the race-related social tensions and the society is completely turned into a chaotic environment. The reaction of the racially prejudiced society has been extremely intense because, the interracial relationship has matured to the level of married. If Iago had carried out such frenzied beastly act before Othello and Desdemona had married, it would have lead to the separation of the lovers. But the interracial marriage has mounted such an apprehension both in the society and the couple.

Hence every other Venetian was easily exploited by Iago and Othello himself easily succumbed to the pressures of Iago. Being married, Othello is convinced that he could restore his honor only by killing his wife who is believed to have cuckolded him. To conclude, Shakespeare has illustrated that the dearth of a society is certain when a racial incompatibility exists in the society. The interracial marriage of Othello and Desdemona may have survived a little longer if Iago has not intervened because Iago has just acted as a catalyst and speedup the dissolution of the marriage.

The love affair between Othello and Desdemona was purely emotional but the moment they enter into the institution of marriage, it definitely has to withstand the whirlwinds of the society. An interracial marriage is perceived as a threat to the integrity of the society and hence it is rarely welcomed. Within such a hostile environment, it is truly a challenge for the couple to uphold their marital relationship in which both Othello and Desdemona fail miserably as they easily yield to the pressures of the society in the guise of Iago. 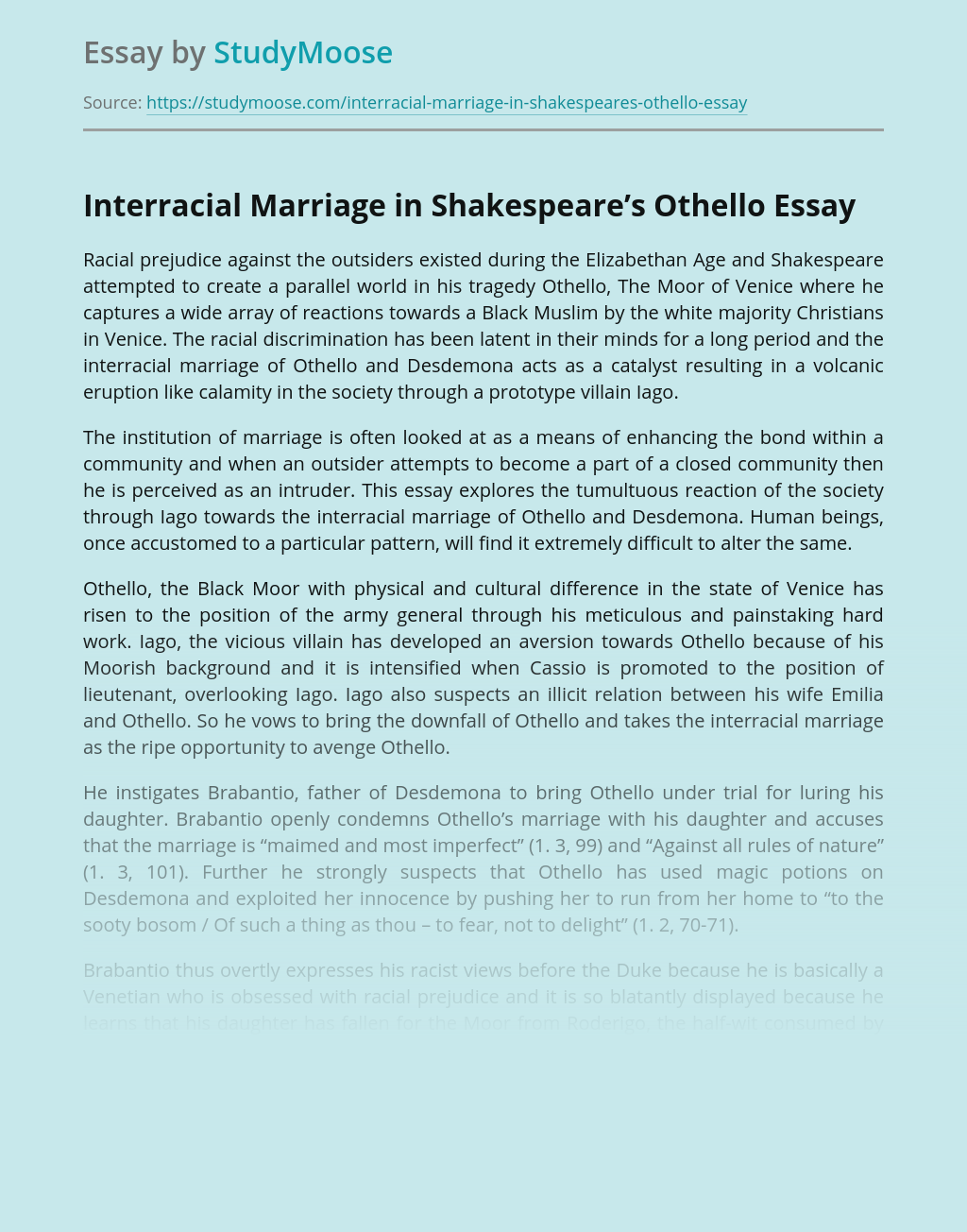