Interpersonal Relationship in a Movie Remember the Titans

In “Remember the Titans” there are at least a series of ten or more conflicts, whether they are physical, mental, interpersonal, or even just random violence. there are groups of whites on one side and blacks on another side, having an interpersonal conflict about the school becoming integrated. A white boy gets an attack of random violence and he is killed, causing a group of white football players, deciding split second, create an assailant against a group of black people; thinking that if some blacks decide to do random violence on a white person that it is ok for them to create an act of aggravated assault on the blacks.

Don't use plagiarized sources. Get your custom essay on
“ Interpersonal Relationship in a Movie Remember the Titans ”
Get custom paper
NEW! smart matching with writer

As football camp comes rolling around, many of the whites still separate themselves from the blacks and vice versa. Coach Boone steps in to be a mediator and to have many of the kids converse with each other so they can learn tolerance with each other, causing less want for homicide.

This causes any other conflicts to not escalate and then everyone is heard out on what they want to say or have to say. There is a conflict of authority between Coaches Yoast and Boone.

Then there is a budding friendship between Bertier and Julius, and then the team in general uniting together regardless of color. The successful, almost-hall-of-famer, white coach, Bill Yoast is suddenly replaced by a no-crap-taking black coach, Herman Boone. At first there is a power struggle between Coach Boone and Coach Yoast, Coach Boone wants to run things his way and Coach Yoast wants to keep different things the way they were.

They soon begin to level with each other and work together as a unit which is good for the team.

In the beginning of the film Bertier was like the leader of the white boys of his team and Julius is seemingly the head of the black kids. When they arrive to football camp, the first day they fight. Julius doesn’t like the way Bertier leads the team as a captain and he decides that he is going to look out for himself, when Bertier brings up the fact this attitude is not good for the team Julius questions him as to why he is letting the black kds do the brunt of the work.

Bertier realizes that Julius is right and then starts to change first off by correcting his white best friend’s blocking. Thus begins their friendship. When they get back from the camp they face problems in school from being friends. When Julius helps bertier stop a fight he gets called an “Uncle Tom”. When Bertier turnd down his girlfriend to go hang out with Julius she tells him that he needs to get his priorites straight. But through all this they remain best friends.

Interpersonal Relationship in a Movie Remember the Titans. (2016, Nov 15). Retrieved from http://studymoose.com/interpersonal-relationship-in-a-movie-remember-the-titans-essay 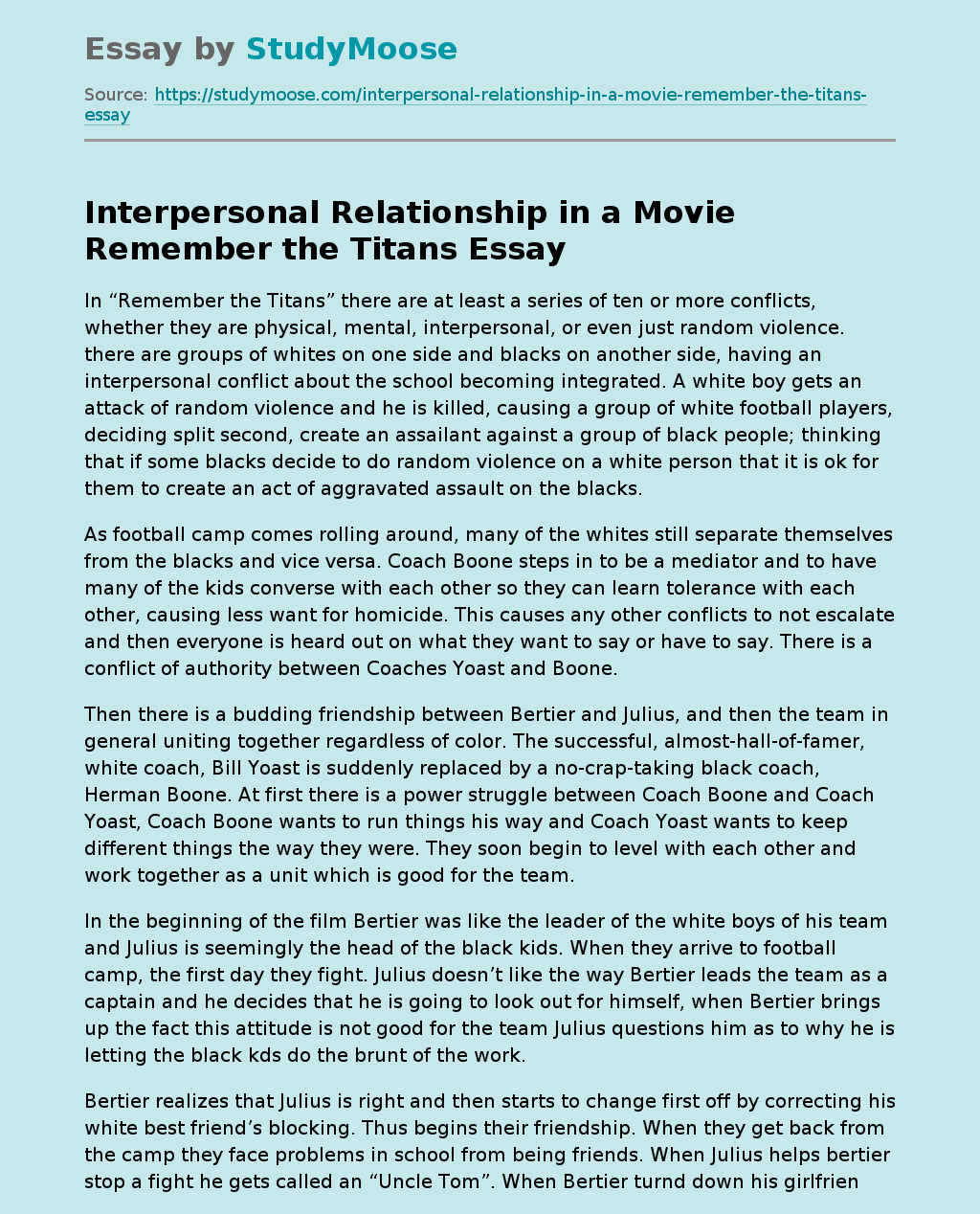