The motion picture Crash is an extremely thought provoking movie about the underlying racial tensions in our society, with the representation of black, Hispanic, and Middle Eastern ethnicities and the stereotypes associated with each. The movie Crash is unique because instead of showing characters at their best, like most popular movies do, the characters are instead stressed out and pushed to their own emotional limits. In the movie, crashing comes from beliefs in stereotypes, pre-conceived judgments, and racial discrimination. These negative elements run rampant throughout the movie in attempt to show a typical day in the life for the people of Los Angeles.

Don't use plagiarized sources. Get your custom essay on
“ Interpersonal Communication Reflective Paper on the Movie Crash ”
Get custom paper
NEW! smart matching with writer

No matter how hard some of the characters try to negate their own racial stereotype, in some way or form it becomes inevitable that they must live out the stereotype to exist in the society they live in. The character I will be analyzing throughout this paper is Officer John Ryan who was played by Matt Dillon. Ryan is a middle-aged police officer in Los Angeles, California who has been with the force for seventeen years, with a knack for being exceedingly racist in his multiple encounters with African Americans.

Although Officer Ryan is an incredibly verbal person, his use of nonverbal communication speaks even louder.

From the beginning of the movie, Ryan displays character of a man that’s full arrogance and superiority. He seems to have a “better than thou” attitude. This is prevalent in the way he way he carries himself; shoulders back, chest out, and head cocked.

He has looks of the “typical” All American male; tall, dark, and seemingly handsome with a loud and stately voice. I depict Ryan as a white supremacist. Not only is he racial, but also sees himself as being above those of color. He seems to think that he is entitled to the power that comes from his ethnicity. He believes that because he is a white male living in North America, he is somewhat at the “top of the food chain”. Throughout the film, there are consecutive occurrences when Officer Ryan uses nonverbal and interpersonal communication to assert his authority and social supremacy. The first instance being when Officer Ryan pulled over Cameron and Christine, a classy black couple, for presumably taking part in oral sex whilst maneuvering a vehicle. Ryan had so much underlying hatred towards blacks; he used his power to exercise inappropriate behavior towards an innocent couple of color.

After asking Christine to put her hands on the car, he then began to feel her up and touch her body in an unacceptable manner right in front of her husband, the whole time acting as though he was “checking for weapons”. And after witnessing the conflict between Officer Ryan and Cameron, Hansen suggests that Officer Ryan be removed from the LAPD. He was soon shocked to find that the LAPD does not share workplace values or norms that are expected of law enforcement officers. Ryan’s actions are noted by his superior, however, because he has such a strong network density (how connected each network member is to other members) the superior officer refuses to dismiss Ryan, but transfers Hansen to another car. hen he shook hands with Hansen, he held on and squeezed extremely tight, assuring him that after years of doing this, he will become a different person; implying that after some time of working in the force, he, too, will become racist. Again, he was using this hand gesture to exert authority over one of his colleagues. In our society, particularly the South, there are many people with mindsets alike Officer Ryan. Although there are many people who would instantly recognize the racial injustices of his behavior, there are also many people who would justify it because of the general stereotype of blacks.

The media somewhat perpetuates the stereotype of blacks simply by showing their gang activity, criminal accounts, and poverty levels. However, I think that officers Ryan’s hatred toward blacks stems from bad personal experiences of his own, particularly one with his father. As a result, every offense a black person commits reinforces his misinterpretation of the black population as a whole. Instead of seeing a person who commits a crime as a sinful human being who has made wrong decisions in life, he assumes the reason they commit such crimes is merely because they are black. As we continue lookin at Ryan, there were two very significant emotional moments for Ryan’s father with health coverage, Ryan experienced the primary emotion of anger. He interpreted this event in an extremely negative way: because Shaniqua was black and made him angry, he believed that all black people were against him. While it is debatable whether or not he always had a negative mood towards African-Americans, there is certainly no denying a change in feelings. The result of this emotion was neuroticism on Ryan’s part, focusing only on the negatives, and subsequently venting on Cameron and Christine Thayer which violated socially acceptable display rules.

The second emotional event for Ryan was when he eventually saves Christine Thayer from a car crash. He must save Christine by communicating with her, but the fear and anger she has towards Ryan because of his abuse hinders his ability to do so. It is in that moment that Ryan realizes what his actions and mismanagement of emotions had caused. Only through supportive communication, sharing messages that express emotional support and offer personal assistance, is John able to save Christine. There is a sense of reappraisal in Ryan’s second emotional encounter. The crash made him rethink about his previous actions toward African-Americans, and thus caused a change in how they impacted him emotionally. Conclusively, I see Officer Ryan as a very intriguing character. At the beginning of the movie, I thought he was just a racist jerk who didn’t care about anyone except for himself.

The way he treated Cameron and Christine made it very apparent that he didn’t feel any shame in completely humiliating and taking advantage of two innocent people. However, as the movie progressed, you see him living with his dad and waking up in the middle of the night to take care of him and his health problem. Then you see him seeking out extreme measures to try and receive some alternate health care for his hurting father. And finally at the climax scene of the movie you see him risk his own life to save a black woman. At the end of the movie, I saw Ryan not as a selfish uncaring person but as a man who has let certain individuals change his perception on an entire race of people. Because he is a cop, he deals with all of the black people who DO live up to their stereotype and hardly ever comes in contact with the black people who are good and responsible citizens. He let his bitterness consume him. 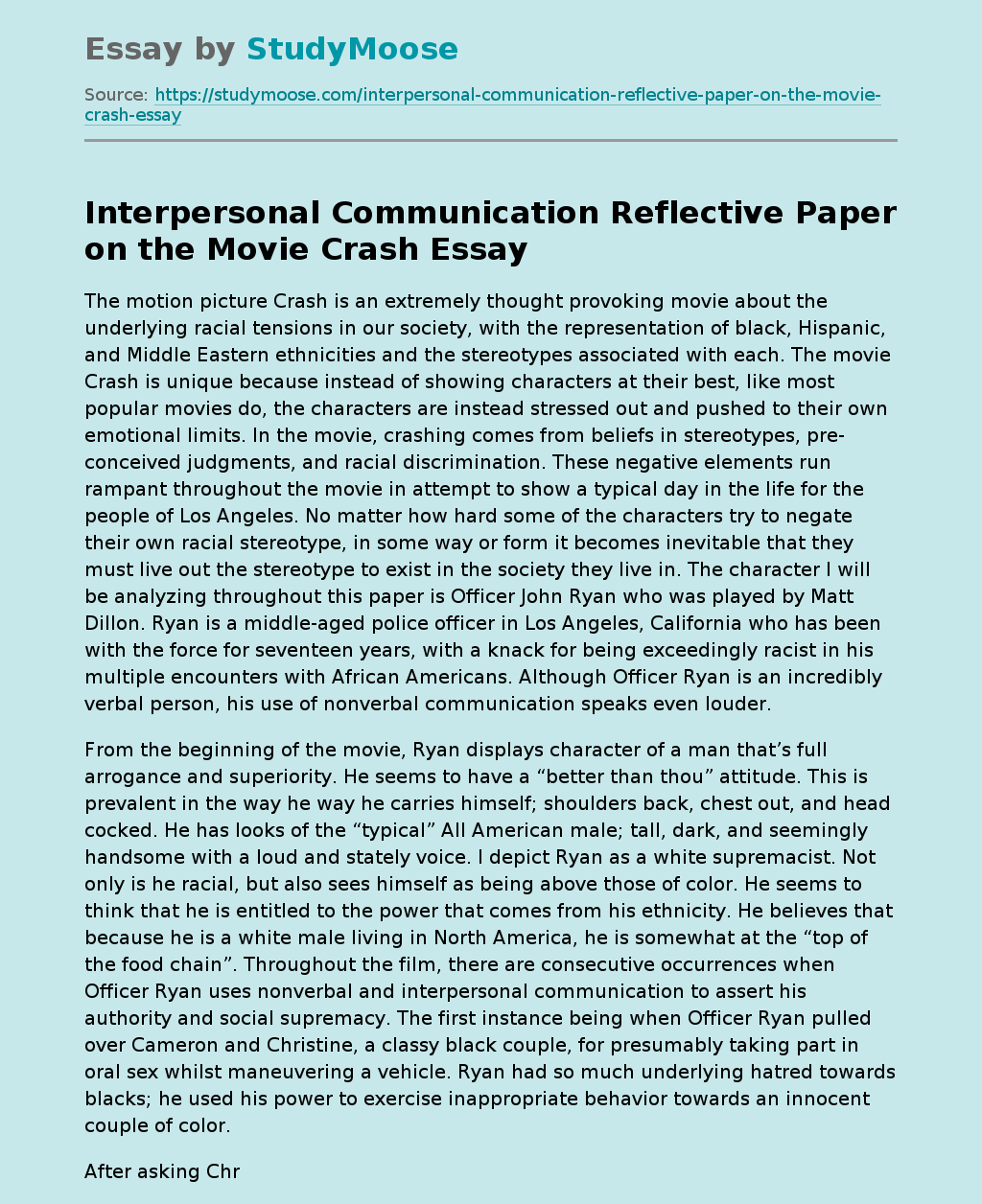