While the information super highway has had an effect on society, all is not positive and toward a goal of the growth to society. Corporations may experience a growth in profits by selling goods via Internet and increase these profits by the reduction in work force. This reduction in workforce, however, reduces the quantity of available purchasers, having a negative economic effect on society. In addition to the negative economic effect society as a whole is about to suffer immeasurable harm.

Don't use plagiarized sources. Get your custom essay on
“ Internet Revolution and Information Superhighway ”
Get custom paper
NEW! smart matching with writer

Social interaction has been reduced which will have an effect on society interaction.

While the speed and ease of the information age has been good for profit lines in some corporations, others have been trying to play catch up in the technology explosion, which has given society an “I need it now” mentality. Small companies who used to rely on local workforces, the teens of America, the future of society, now have been shoved aside like abandoned unwanted children in third world countries.

Major corporations like Wal-Mart, Target, Lowe’s and Home Depot have monopolized the shopping experience once enjoyed by the mom and pop stores, the backbone of small town America.

Where there once were thriving stores owned by families who employed friends and relatives, there are now vacant buildings and thrift stores selling used clothing and furniture. The “Super Centers” have invaded and crippled small town America and have gone further offering Internet shopping for ‘our convenience’. The reduced need to employ the younger generation has lead to an increase of unemployment especially in small towns.

The reduction of workforce may strike back at the big corporations, though, due to the reduced amount of money able to be earned and, therefore, spent by the population as a whole. Reduction in workforce for profits alone would appear to have an effect on the spending force, and also have an effect on the working abilities of teens and recent graduates. Sales positions being replaced by pictures on a computer monitor numbs the human ability to use the remaining senses. While the shopping experience of interaction with the salesperson may be a positive one in some cases, the lack of social interaction may be devastating in the long run.

For example, shopping by phone, QVC or Internet does not allow you to smell the fabric, feel the texture on your face as you try it on, the fall of the fabric as it drapes caressing your shoulders with a feel that only fine silk can produce, the little label able to readily be read in the store as you judge, is it worth the expense of dry cleaning versus hand or machine washing, these cannot be appreciated by seeing a picture and deciding if the price is justified.

The lack of interaction with a sales person, while at times may be a good thing, may be a cause of the lack of patience in today’s society. Having items available online or a TV shopping channel can, however, introduce people in parts of the country to things never before available. Small companies don’t have to “go global” in order to sell via TV or Internet internationally. Having to deal with a sales clerk teaches one patience, social inter- action, and communication skills. Selling is an art. It used to be said that a good salesperson could sell ice to an Eskimo, or sand to an Arab. The availability to buy things online does not allow other opinions to come into play.

The reaction you have to a purchase never seen before is anti climactic. What are you going to compare it to? Another picture? Social interchange of ideas is what promotes a society to grow. Now all a person has to do is order something on line, get it at their door step while at work, and then take a picture of it and email the picture to show friends and family. Absolutely no face-to-face interaction has taken place in the above scenario. Where will the future generation learn speaking skills, body language and social interaction if all they do is sit at a desk and buy with a credit card, where no communication skills are required?

According to Robert Theobold, while the information super highway has had an effect on society, no one knows what the future will bring. The Internet provides the potential for a new form of collaboration toward a creative and successful future for the planet. To take advantage of emerging technologies to create, manage, and use information that could be of strategic importance to the United States, the administration has launched an initiative to guide industry’s development of the national information superhighway. While the structure and services to be offered by the information superhighway have not yet been determined, several critical technical challenges are emerging. 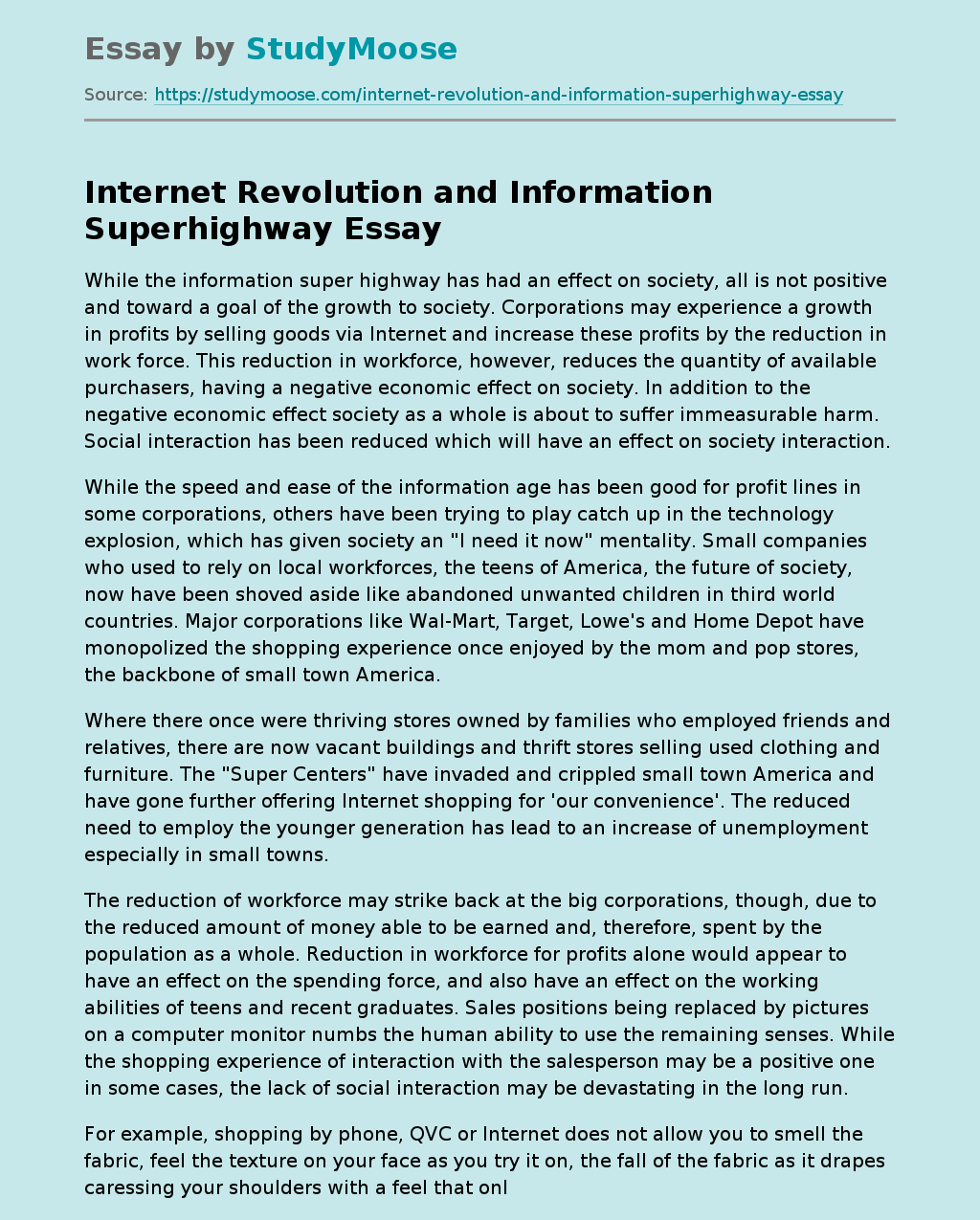