Internet Is a Double-Edged Sword

Turn in your highest-quality paper
Get a qualified writer to help you with
“ Internet Is a Double-Edged Sword ”
Get high-quality paper
NEW! AI matching with writers

“For every hour each week spent online, this group sharnk by about 4 percent.”(Iso, 1) It is very easy to understand. We only have 24hr each day. When a person spends more time on internet, he would spend less time with his family or real life friends. Those people who live with that person in real life will start leaving him.

However, those people who found out on the social network site will not stay online all the time.

During the blank time, this person will feel lonely. There is nothing in his life. When a person spends more time on internet, enjoy his own small world more, he is also kept away from outside by internet. Most people know, when those people who are falling in internet. they will not respond to any one, refuse any thing not relate with them, not eating any food until really hungry. If any one tries to stop those people in the middle, they will be yalled or scolded.

The effect is not very obsiver in the beginning. It will stack. Like a snow ball becomes bigger and bigger. Under this mode, people are selfcentered. People will be lonely by selfcenter, and be isolated by other people. Second, interenet is almost the fastest way to transfer messages and informations. It is good and bad. It is like a double-edged sword. Different way to use it, it will creat differet endings. Many scandals are released on internet first, than many people share or retwitter it. The imformation will not be able to control any more. The problems related with scandals will be solved by the pressure from publick opinion. Presidential election is a best very good example. Romney had almost as many supporters as Obama. After a vedio about a meeting between Romney and many rich supporters in a restauarnt, he lost a lot of supporters instantly. Romney and some of his suppoters’ relationships were totally over at that time. Romney tried to changed those supporters’ mind about that vedio, but it is way too hard to fix it.

On another hand, there are not only bad enddings. Those singers or movie starts use social network site to share their messages to their fans. Internet reduces the distence between people’s relationship. Those famous people would not be easy to meet in real life. Internet is the best way. Few weeks ago, there was a news related with a family and Facebook. A lady send a none sence messages on Facebook. Her hasband immidently realized his wife may suffered a heart attack. He called 911 and drive back to home. Because he descovered it early, his wife get rescued. Internet helped him protected this relationship. Thrid, internet is place can creat relationship.

In 20th century, many people start trying to find their wife or husband on social network site or online games. The relationship is very to creat and start compear with real life. People do not have to scare to be refused by a girl or a guy online. No one is watching beside. People will not feel too lose about refuse. Many girls or guys will accept it most time. They would like to give a try, because the person can be the right one. The relationship looks beautiful but it is made by glass. We never know how much lies covered by internet. It can be a fake relationship. Internet is only a tool. It will effect user and their relationship to other people. It is a knock-on effect. People is one who kick it. It still people effect relationship. The only difference is the way use internet.

Internet Is a Double-Edged Sword. (2016, Dec 28). Retrieved from http://studymoose.com/internet-is-a-double-edged-sword-essay 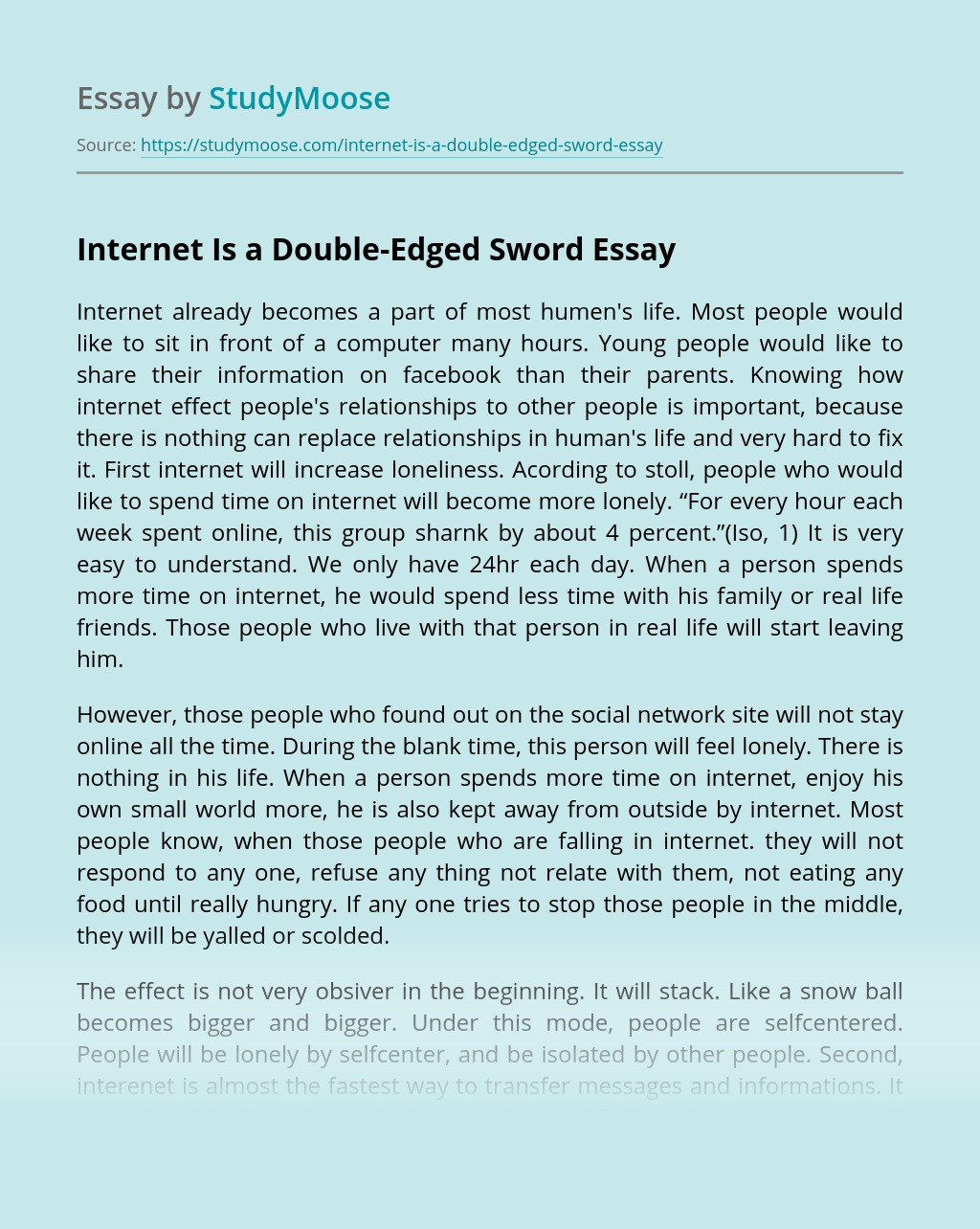 Turn in your highest-quality paper
Get a qualified writer to help you with
“ Internet Is a Double-Edged Sword ”
Get high-quality paper
Helping students since 2015
Stay Safe, Stay Original