Imagine a place where you had access to any information you needed, at any time. Some might say that this place may not exist, but others could say that this defines the Internet. The Internet gives you access to all sorts of wonderful knowledge and other content, but with good comes some bad. Countries throughout the world have begun, or are trying to begin, censoring the Internet of these bad things.

The problem with censorship is that once it starts, there may be no stopping it, and would violate the First Amendment, freedom of speech.

Mariam Adas, a Facebook campaign organizer for Jordanians against censorship, believes that there’s no way to do it right. Government will use blocking offensive/copyrighted/pornographic material as a precedent and then further block and filter other political, social and media websites (Ghazal). The aforementioned American bills, SOPA and Protect IP, where so carelessly written, that they would have the power to entirely shut down full websites, such as Facebook, Wikipedia and YouTube for content submitted by users (Hitzik).

To pass censorship laws like these would totally contravene our own Amendments.

Free speech is the right to speak you opinion in public without censorship. To take away that right would be unconstitutional, and un-American. For example, the British Matthew Woods, 19 years old, was sentenced to 12 weeks in jail for simply posting drunken, distasteful jokes about a recent abduction of two girls. While the remarks where horribly offensive, no one should be prosecuted for using their voice, and that voice should not be censored.

Doing such will lead our culture into believing it has a right not to be offended (Chu). One of the main reasons for supporting Internet censorship is to protect children from seeing indecent materials, such as pornography. This is understandable, but it is unfair to hinder adults from viewing adult materials, and for this reason there are many ways that parents and guardians can protect their children from such things, says Adas.

One may contact their internet provider, or download applications to filter out inappropriate websites (Ghazal). Filters are also placed on moral and religious standing. The dilemma is that there are many different moral and religious standings, and attempting to filter the Internet to a point that pleases every group would be impossible. People should be afforded the right to use their own discretion and self-adjudicate on what they would like digest. In the end, the issue of Internet censorship is always controversial.

Nevertheless, America is a society based on freedom, and the right to free speech does not belong only to the press, but to each individual person. This freedom of should be extended to the Internet, no exceptions. A quote, by Robert A. Heinlein comes to mind: “The whole principle is wrong [censorship]; it’s like demanding that grown men live on skim milk because the baby can’t eat steak. ” Works Cited Chu, Henry. “Britain Wrestles with Free Speech on Web. ” Los Angeles Times. 09 Nov 2012: A. 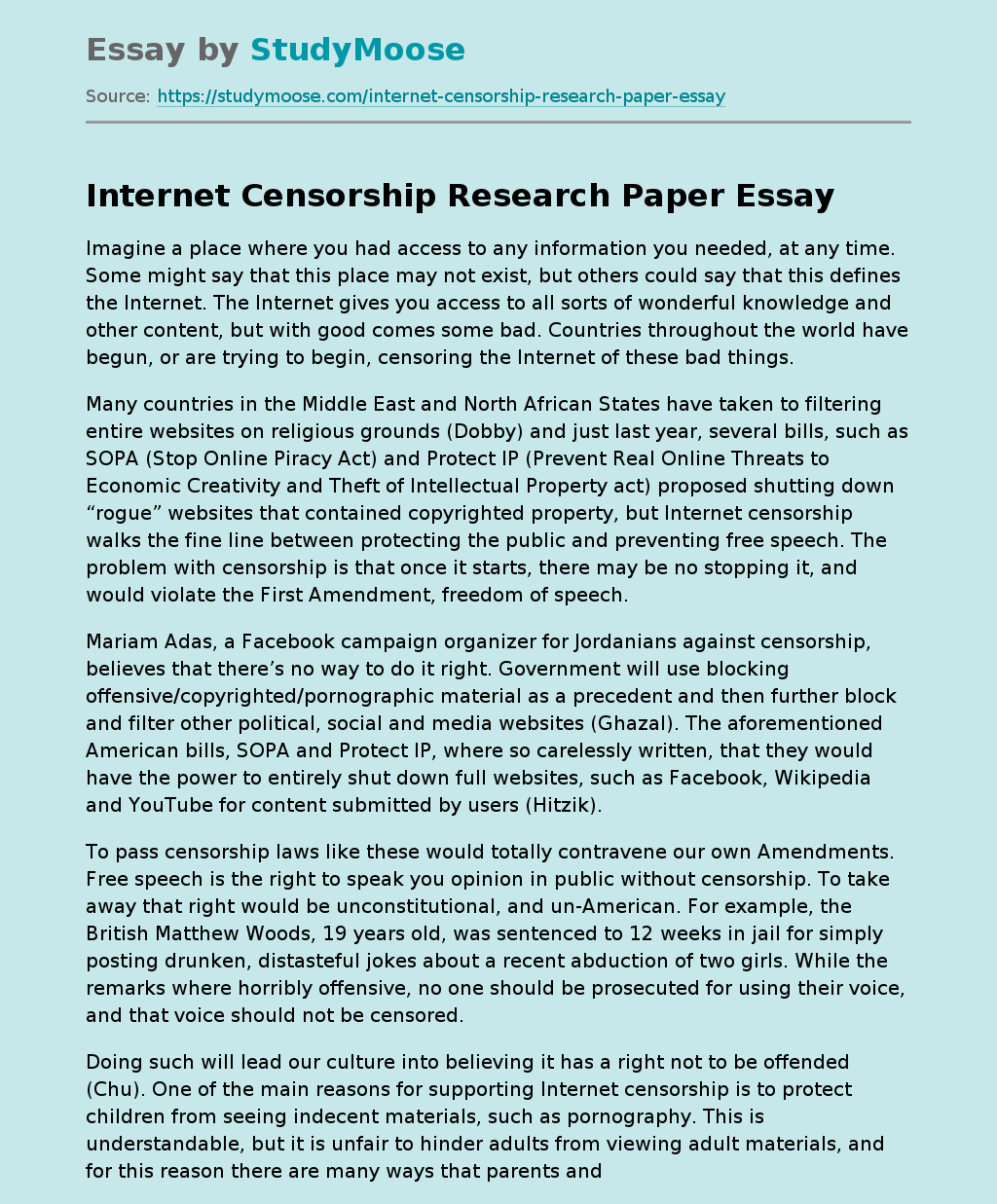