Privacy was once valued and protected. But now with so many new and convenient technological advancements, is privacy in the 21st century possible? To protect our privacy Congress created the Electronics Privacy Acts (ECPA) to protect us from government access to private information that is transmitted and stored on the Internet, such as emails, private photos, or corporate data.

Congress has not updated the ECPA on technology since it was created, in 1986. When the ECPA was created there was no “World Wide Web”, social networking was something in the future, and nothing was stored in what we call the “cloud.

Don't use plagiarized sources. Get your custom essay on
“ Internet and Privacy ”
Get custom paper
NEW! smart matching with writer

” With all the technological changes in today’s society no one is protected. Privacy is defined as being free from the public eye. Yet we have so many people sharing personal information on social networking websites, and government agencies monitoring emails, and phone calls most of the time without our knowledge. There is no privacy in the 21st century, it is just a nostalgic feeling, and it is no longer practiced.

Today’s privacy laws aren’t up to date with today’s technology. Things are rarely sent through the mail, and emails and text messages have replaced written communication. Online messaging and social networking was something of a novelty when lawmakers created the ECPA (Frolik, 2013). A recent article from the Dayton Daily news written by Cornelius Frolik on June 2013 he mentioned, “The Government can easily access many personal communications and other private information without sufficient probable cause”.

Instead of acquiring a warrant that requires more standards and procedures. Government agencies instead obtain subpoena’s to obtain people’s emails, and telephone records (Frolik, 2013). Although, local authorities catch lots of dangerous criminals through information online like emails, photos, and social media sites like Facebook some critics still feel it is an invasion of privacy.

Also as our technology advances by leaps, and bounds so does the way Government uses new high tech tools to surveillance law-abiding citizens. Though our Fourth Amendment states to protect the American people from unreasonable searches and seizures. Almost everything is done through technology in the 21st century. This meaning that government can seize any emails that are 180 days or that has been opened without a warrant; subpoenas have become the most used investigator tool for Government agencies. The reason why is because they can be easily written inside the prosecutors office without any further review from a judge.

This means there is an exception to the Fourth Amendment of the United States Constitution, if it satisfies the requirements. The question we should be asking when it comes to Government and our privacy are ” Is to explain a clear understanding of the word privacy”? If the Government cannot clarify the term privacy then how can they protect our privacy? The lack of clarity makes it hard for lawmakers to create new policies that will keep our privacy out of harm (Libin, 2012). Two reasons why privacy can be considered threaten in today’s society one being the Government powers are limitless, and two being we the American people expose ourselves digitally (Libin, 2012). The people of America should come together and declare for the Government to protect our privacy rather than participate in warrantless searches (Libin, 2012). The fact that the Government can argue that the Fourth Amendment does not apply because there is no exception to privacy when it comes to protecting national security, then that leave the American people in times of calamity, and crisis.

Laws like the ECPA is a law that the Government has an obligation to respect (Libin, 2012). The ECPA protect the privacy of the electronic communications, but when law enforcement and prosecutors have to protect and enforce laws, personal information has to be collected to build a case (Libin, 2012). The solution is more complex than simply, and right now the Government is facing difficulties figuring out the best way to protect the American people (Libin, 2012). Given all the information privacy seems to be the problem. It can be portrayed in many ways, one as it’s protecting the public from terrorism, and local crime; and two being if you are innocent, what do you have to hide?

In 2014 I find that most American people store their digital lives in what we call “The Cloud” which included emails, calendar data, photos, and other sensitive information. The ECPA has become obsolete. Technology today leaves the ECPA outdated, the laws have not changed since it was originally created in 1986. The existing privacy laws only focus on the text-based personal records, and the issues that people face today with this outdated privacy law is gathering of digital multi-media files, and the way this unauthorized data is used (Lipton, 2010). Do you consider video surveillance systems out on the street personal data? Some may say yes and some may say no. According to a case study researched by Jacqueline D. Lipton, if the face of an individual is recognizable, than it is considered personal data. Some people feel protected with the video surveillance capturing their every moment.

Then on the other hand some people feel they are being scrutinized being watched by video surveillance. The U.S. has a protection for free speech and for free of a press under the First Amendment. However there is no express constitutional right to privacy (Lipton, 2012). The question that American people should rigorously examine is whether or not Congress should repeal the ECPA and creates new privacy laws to replace it (Kerr, 2014). The ECPA should be considered top priority when it comes to being reformed. If Congress were to start fresh on what changes to make on the ECPA the technologic changes would have to be particularly considered.

It has made credit card fraud, once an easy crime much harder to get away with. They know what you’re buying schedule is like, so if someone steals your card and tries to buy something that is not something you would normally buy, you will get an alert about it. Security cameras at stores and ATM’s prevent a lot of robberies from occurring. The government states that the main reason why they monitor just about everything on the internet is to try and catch terrorist attacks before they happen.

They have said that some of the terrorist plane hijackings could have been prevented if they had the internet security that they do now. Of all the good things that come with the internet, there are also some drawbacks that can be dangerous. There is just as much false information on the internet as there is true information. Hackers can create viruses that can get into your personal computer and ruin valuable data. They can also create viruses to steal personal valuable data such as identity theft.

There are also people called “predators” that hang out on the internet waiting to get unsuspected people into dangerous situations. People can get addicted to the internet which can cause problems with interacting with their friends and family. As it is stated in What Matters in America, “Like any space where people gather, the virtual world is not immune to the same set of troubles we face in real life. Teens and children can be targeted be sexual predators. Kids can “cyber bully” classmates, carrying the tortures of the playground onto cell phones and computer screens at home.

Illicit romances and online flirting may be taken beyond laptops, ruining relationships and destroying marriages. And, of course, cybercrime is ever present, seeking log in numbers, financial data, and credit card information”. (22) Privacy has become a big question in today’s society with all this new technology and the internet. The internet might be more secure today from hackers and viruses but we don’t really have any privacy on the web. Every purchase we make on the internet can be tracked by the government. They can also track almost every phone call that is made.

The internet has become more convenient to use than it ever has been. You can perform just about any task you want with a couple mouse clicks. Your computer can remember everything you do on the internet. It will save all the sites you have been to, what you have downloaded, what you have bought online, and can even save your credit card information. When online you will see recommended web sites based on what you normally do online and even on certain sites there will be recommended products that are similar from what you have purchased before.

All this personal information can be easily looked at by the government or even professional hackers. Is our privacy really being invaded or are we just putting this information out there? People say that the government is invading the public’s privacy. They say that they shouldn’t be allowed to monitor the internet. I don’t believe our privacy is being invaded because no one forces you to put this information online, even though it is hard not to in today’s society.

In What Matters in America, David Plotz states, “Real privacy is what allows us to share hopes, dreams, fantasies, fears, and makes us feel we can safely expose all our faults and quirks and still be loved. Privacy is the space between us and our dearest, where everything is known and does not matter. ” (70) With all this advanced technology on the internet, we need the government to monitor it or else there would be a huge amount of criminal activity and the internet would not be safe. 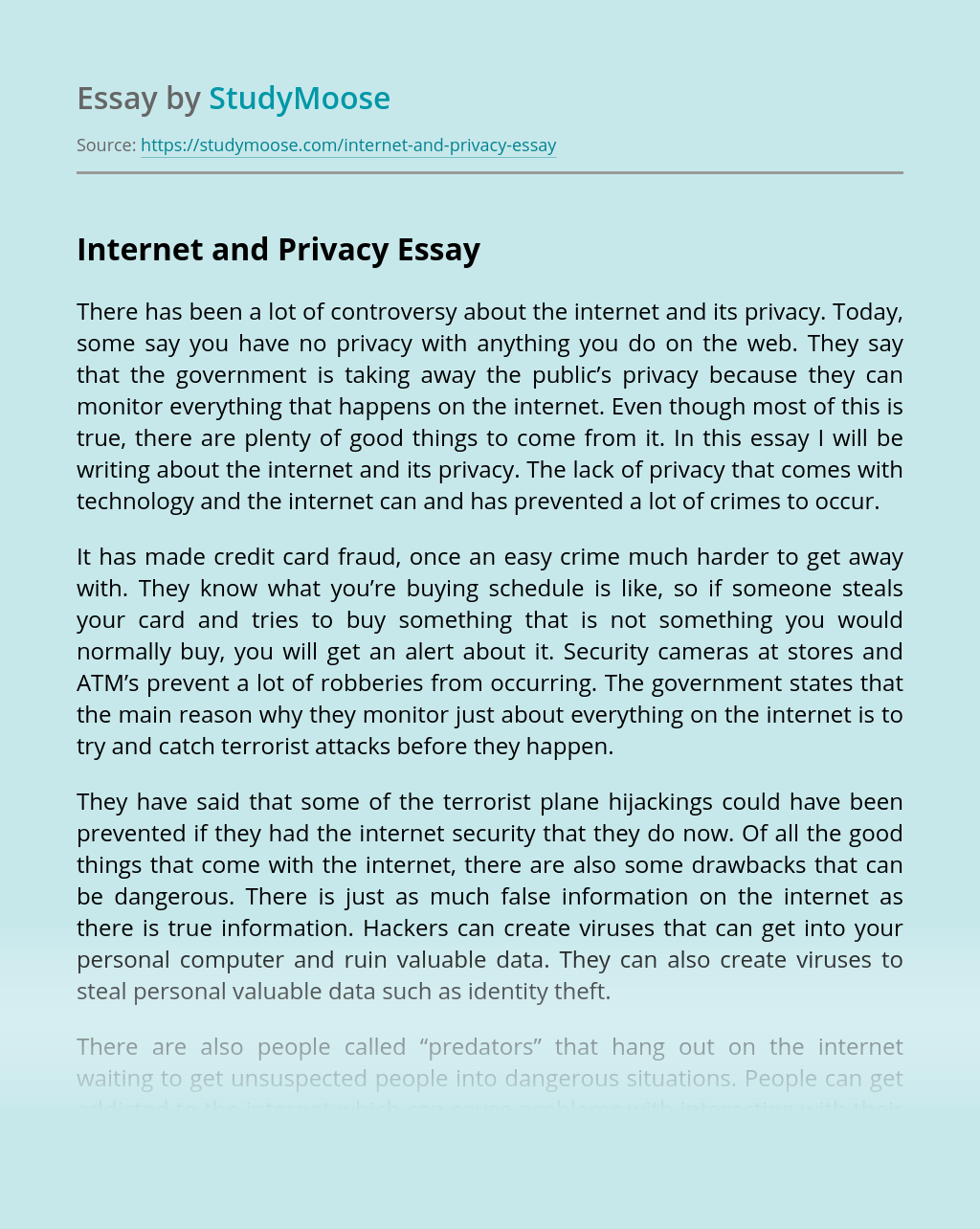