How does the “standardized versus localized” debate apply to advertising? Communication takes place only when the intended meaning transfers from the source to the receiver. This can be a problem when a standardized approach is used. The message is not able to get through to the receiver due to different reasons such as lack of knowledge of the audience. There are people who feel an advertisement can be used anywhere in the world due to the converging tastes and preferences. The “standardized verses local debate” is very important in analyzing when advertising internationally.

Turn in your highest-quality paper
Get a qualified writer to help you with
“ International Marketing Concepts ”
Get high-quality paper
NEW! AI matching with writer

A standardized approach may be misinterpreted and/or misunderstood by certain cultures when the message is not altered to their values and beliefs. On the other hand, an advertisement using a localized or adaptation approach is able to reach a particular audience by portraying a message that is understood and comprehended. A localized approach is only meant for a particular audience so it may cost more and it is not able to be used anywhere else.

3.) What is the difference between an advertising appeal and creative execution? The audience appeal is the communications approach that relates to the motives of the target audience. For example, ads based on a rational appeal depend on logic and speak to the audience’s intellect. Rational appeals are based on consumers’ needs for information. In contrast, ads using an emotional appeal may tug at the heartstrings or tickle the funny bone of the intended audience and evoke a feeling response that will direct purchase behavior.

Creative execution is the way an appeal or proposition is presented. There can be differences between what one says and how one says it. There are a variety of executions including straight sell, scientific evidence, demonstration, comparison, testimonial, slice of life, animation, fantasy, and dramatization. The responsibility for deciding on the appeal, the selling proposition, and the appropriate execution lies with creatives, a term that applies to art directors and copywriters. 5.) When creating advertising for world markets, what are some of the issues that art directors and copywriters should take into account? Art directors are in charge of choosing graphics, pictures, type styles, and other visual elements that appear in an advertisement. They must make sure that visual executions are not inappropriately extended into markets.

For example, when I was in Europe I saw commercials for beer brands where the actors/actresses were drinking the beer. In the United States, it is against the law to show people actually drinking beer in the commercial. Copywriters are language specialists who develop the headlines, subheads, and body copy used in print advertising and the scripts containing the words that are delivered by the talents in broadcast ads. A copywriter needs to be able to think in the target language and understand the consumers in the target country. A copywriter has the responsibility of accurately putting a message into writing that the target market is able to comprehend and understand. Both the role of the art director and copywriter have important roles in order for an advertisement to be successful.

They are called upon to build consensus and understanding, create trust and harmony, articulate and influence public opinion, anticipate conflicts, and resolve disputes. There are many differences between PR practices around the world. 8.) What are some of the ways public relations practices vary in different parts of the world? Public relations are affected by cultural traditions, social and political contexts, and economic environments. There are different ways to communicate in developing countries versus communicating in the United States. In the United States, PR is increasingly viewed as a separate management function. However, in Europe PR professionals are viewed as part of the marketing department. China is a country that lacks strong public relations. They are not able to handle damaging media content and they are not able to publicly explain their views. 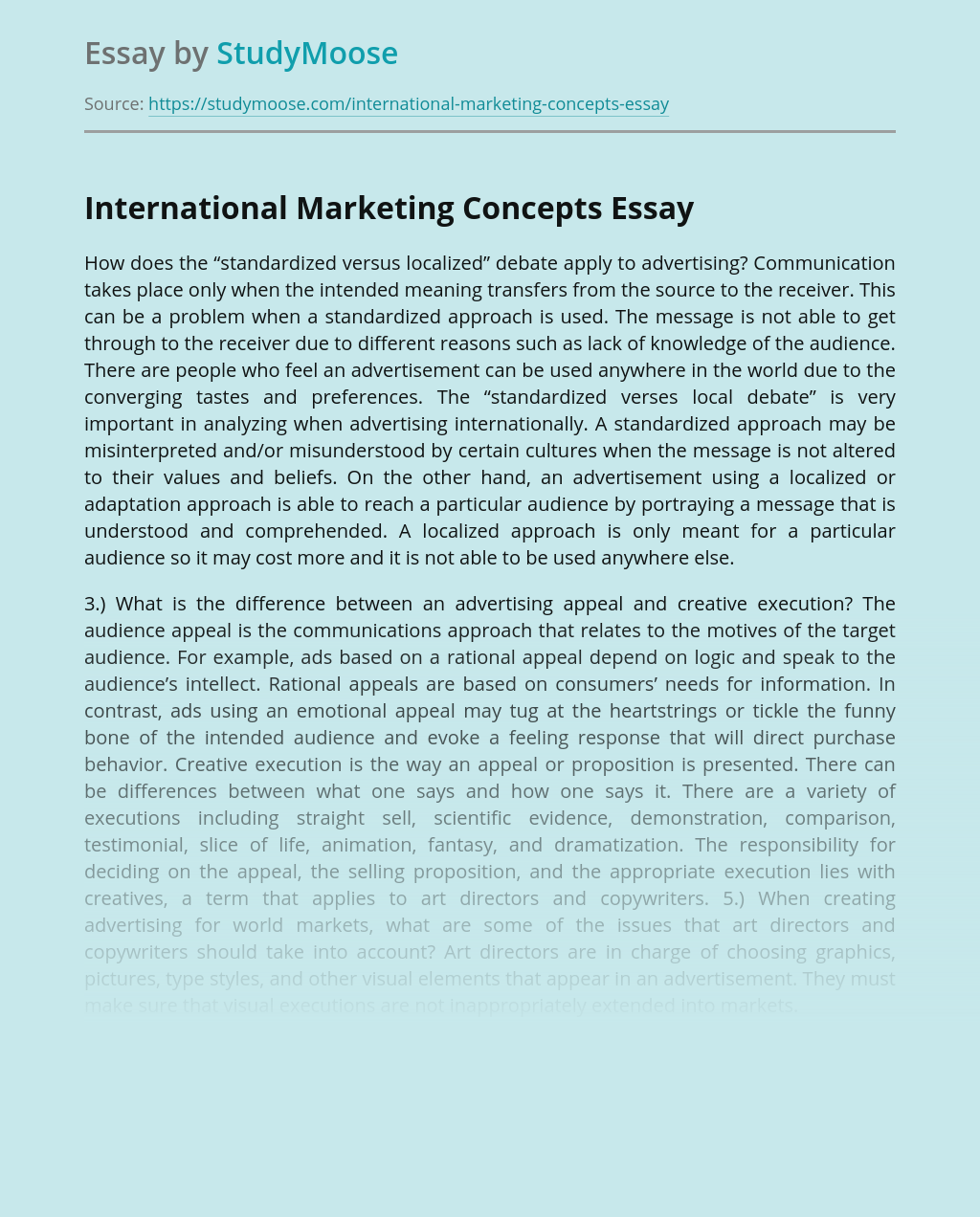 Turn in your highest-quality paper
Get a qualified writer to help you with
“ International Marketing Concepts ”
Get high-quality paper
Helping students since 2015
Stay Safe, Stay Original