1. Why did the Mercantilists consider holdings of precious metals so important to nation-state building? (6 points)

2. Assume that both the United States and Germany produce beef and computer chips with the following costs: (12 points)

a. What is the opportunity cost of beef (B) and computer chips (C) in each country?

3. “If U.S. productivity growth does not keep up with that of its trading partners, the United States will quickly lose its international competitiveness and not be able to export any products, and its standard of living will fall.” Critically evaluate this statement in light of what you have learned in chapter 3 of the textbook. (10 points)

This statement could be true if trade was based on absolute advantage. However, since trade can take place on the basis of comparative advantage, what counts is relative cost differences. Consequently a country can be less efficient or become less efficient in all goods and yet again from trade as long as there are relative cost differences in autarky. Thus, different rates of productivity growth may change what a country exports, but it is unlikely that it would ever take away the basis for trade, its ability to expert.

4. The following table shows the number of days of labor required to produce a unit of textiles and autos in the United Kingdom and the United States: (12 points)

a. Calculate the number of units of textiles and autos that can be produced from 1 day of labor in each country.

c. Construct the U.S. consumption-possibilities frontier with trade if the terms of trade are 1 auto: 2 units of textiles.

In autarky, the production ( and consumption ) of textiles and autos will utilize all the available 1000 days of labor. Thus, with T = number of units of textiles produced and A = number of autos produced, 1000 = ( 2 days / unit) T + (5 days / unit )A. The consumption requirement is that 10 units of textiles be consumed for every unit of automobiles. Hence, total textile production is equal to (10) ( total auto production), 10A thus, given the available labor, and substituting 10A for T, 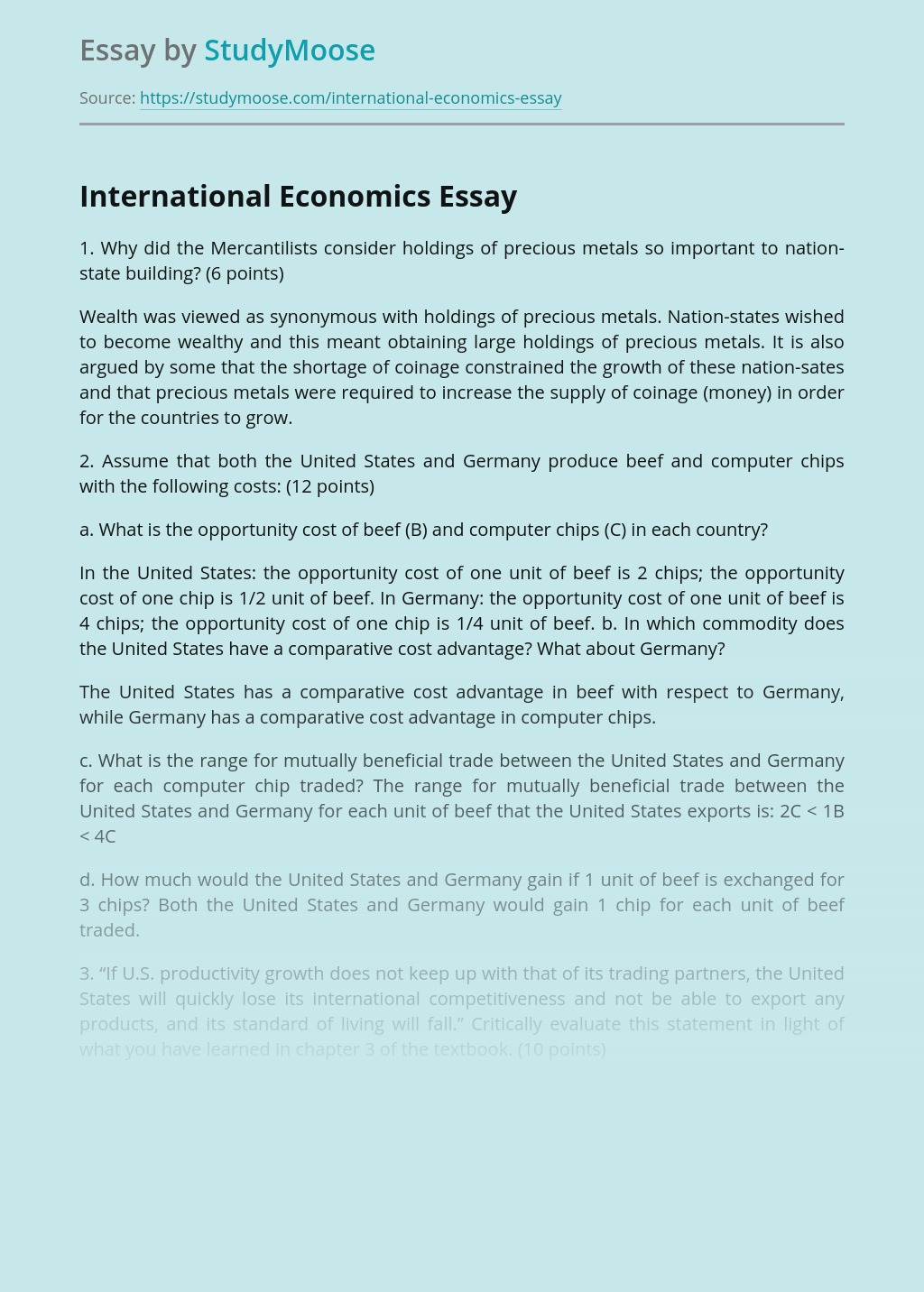 Will Rasmussen in the article “Egypt fights to stem rapid population growth,” writes about Egypt’s dilemma of trying to stop a vastly growing population. Egypt’s population doubled since President Hosni Mubarak took office in 1981 and it’s likely to double to 160 million by 2050. The nation’s growth has been quite high, in recent years... VIEW ESSAY

The market structure for the Dreamliner is that of an oligopolistic nature which means there are few air Premium1632 Words7 Pages Boeing Summary Buying an airplane is huge purchase, each costing over $ 100 million. There are many factors that have to be considered by the customers. These are customers Boeing deals with every day.... VIEW ESSAY