1. Similarity in Eastern Foods The regions of the Near East, Middle East and North Africa are quite similar geographically. Because the regions are comparable in terms of climate, growing seasons, aridity, proximity to water, the same types of plants (grains, herbs) will grow well in all areas. The cuisines are based heavily on grains – including unleavened bread and rice, meats, cheese and yogurt, and fruits, spices and herbs that were introduced through the rise of the Roman Empire and their subsequent trade routes.

Don't use plagiarized sources.
Get Your Custom Essay on International cuisine Just from $13,9/Page

Lamb and beef are the preferred meats as these animals are easily raised on Eastern terrain. Chicken and eggs are both central to much of the food eaten in Eastern cultures. Dairy foods factor into many of the religious cultures of the region and are either kept separate or prohibited. All of these cuisines incorporate family-style eating with different courses and several different dishes for each. The women of each region, as well, are considered to be the caretakers of the family and as such they prepare all the food to be served.

Often the traditional cuisine is influenced by European custom, for instance there is the presence of French cuisine in North Africa, French bread-making had an influence on Moroccan bread and Jews from Eastern Europe brought facets of their own cuisine and dining style to Israel. Guests for meals are always made to feel welcome and usually accorded the best in hospitality due to the often farflung location of the homes. 2. A. Four Common Foods Found in all Eastern Cuisines: Unleavened bread – Arabian cuisine uses wheat to make a flat bread which is served with tahini.

Carbohydrates are the chief staples of the Arabian diet. Rice – in Iran rice is the centerpiece of the meal. Every single meal includes rice. It is referred to Chelo when eaten with barbecued meats, Pollo when combined with other foods, khoresht as a soup or stew. Cheese/Yogurt – Greeks use feta cheese made from goat’s milk as a filler, appetizer or eaten with a bread product. Eggs – used in Morocco to fill savory pastries or eaten hard-cooked. B. Four Etiquette Practices in Eastern Countries: In Morocco, the atmosphere is most important.

The food is artfully arranged and the setting must be opulent and layers of tablecloths are used to maintain cleanliness. Meals start with washing of hands and end with a light sprinkling of water for cleansing. In Arabia, hand washing is also a must as the people of this region do not traditionally use utensils but instead eat with their fingers. Hospitality is very important and they often put on lavish displays of food. To refuse to eat is considered offensive to the host. In Turkey, the head of the family or a guest is always served his food before anyone else.

Older people are served ahead of others. Asking for more food is an indication that the meal was very enjoyable and a compliment. Muslims eat with their right hand only. In Iran, meals are often served on the floor without utensils. Diners are expected to use their right hand only. It is considered good manners to leave a bit of food on the plate to indicate that the dishes were too abundant to finish. 3. West African influence on American dishes When slaves were brought to the United States, they brought many of their more important foods with them.

Because yams are a ceremonial food, it was important that they be brought along in order to allow the West Africans to continue the traditions of their culture. As the West Africans settled in the United States, they used the foods and recipes from their native land which have evolved today into what is commonly referred to “soul food”. Part of the reason was economic – as slaves they were not allowed to eat the more expensive food of their masters and even after emancipation most were too poor to afford little other than the vegetables, beans and grains of their heritage.

Through preparation of food such as watermelon, black-eyed peas and yams, today’s Afro-American population has a way of keeping in touch with the roots of their ancestors. 4. Four foods common to West Africa, two to Ethiopia and two to East Africa Yams are commonly eaten in West Africa as a ceremonial dish. They are prepared mashed or fried or pounded into a paste; sometimes eaten with eggs as a symbol of fertility. Cassave is a plant used as either a flour or the leaves used to flavor cooking; fermented cassava is eaten in Ghana. Bananas are eaten either plain, sweet or savory (as salad, dinner side dish or dessert) or made into wine.

Peanuts are eaten often and in many different forms – from a dish of salted peanuts to ground butter to sauce flavoring to part of a stew. Berbere’ is an Ethiopian pepper that is used as a spice, in a sauce or added to stews. It is an important part of many dishes. Wat is the national dish of Ethiopia; a stew made with chicken, meat or vegetables. It is eaten by dipping into the dish with bread which soaks up the liquid. Ugali is the national dish of Kenya, which is a thick porridge made of cornmeal. Beef is eaten in East Africa, where it is raised. Beef on the dinner table is considered a sign of wealth.

International cuisine. (2017, May 05). Retrieved from https://studymoose.com/international-cuisine-essay 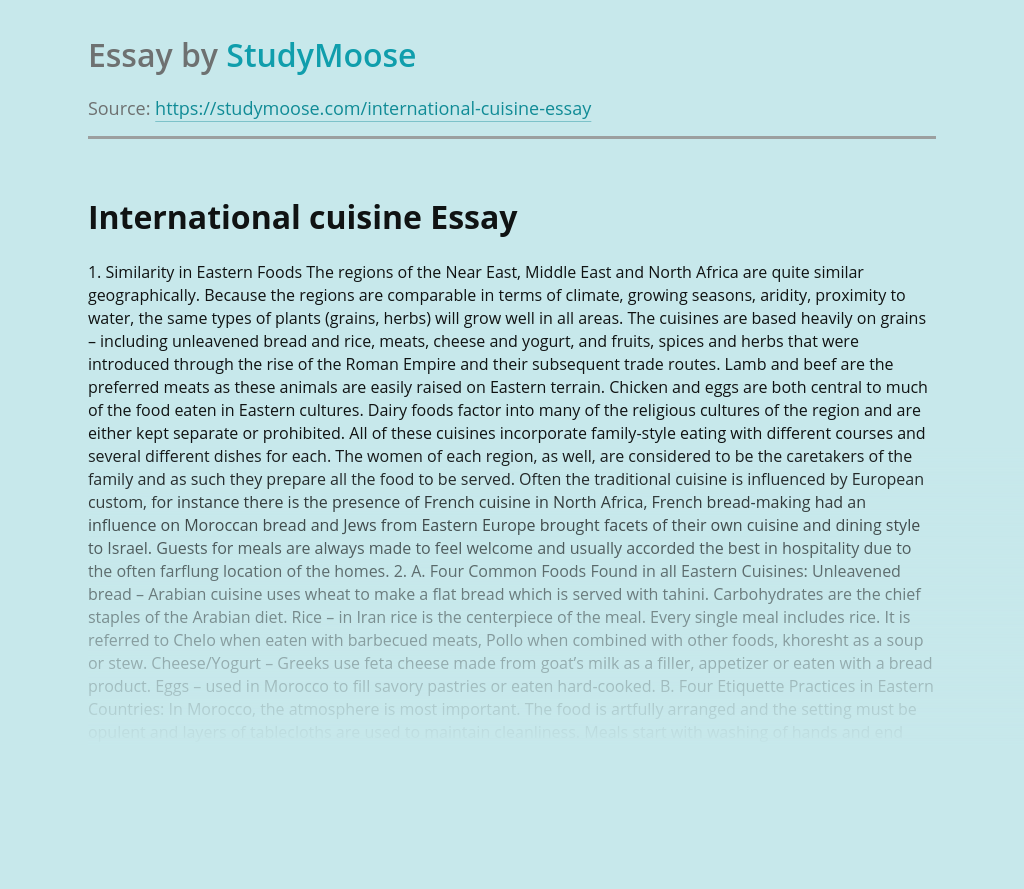 Integrative Approaches to Psychology and Christianity

The Prompt: A well-known football coach once stated, “Winning isn’t whatever, it’s the only thing.” Do you concur or disagree with this declaration? Compose an essay in which you state your position and support it with convincing reasons. The Model Essay: The Sport in Losing The buzzer sounded, and the opposing team began to cheer....

Johann wolfgang Von Goethe “Prometheus” 1. Prometheus is the speaker of this poem, and he is speaking to the god of the gods. 2. In the first stanza, a simile occurs, it says “And, like the boy who lops the thistles’ heads” This simile here was revealed by Prometheus and he was referring Zeus to...

Week 2 Virtual Lab Score: 40/40 (100%) Week 2 Virtual Lab: The Cell Cycle and Cancer Worksheet 1. In which phase of mitosis do each of the following occur: a. Centromeres split and chromosomes move toward opposite sides of the cell occur during the anaphase. b. Chromatin coils to form visible chromosomes occur in the...

View sample
The Diary of a Young Girl

“The Diary of a Young Girl” is a famous book written by a 13-year-old Jewish girl named Anneliese Marie “Anne” Frank who wrote a diary which she named Kitty. She received this diary in 1942 on her thirteenth birthday. She kept this diary because she wanted the diary to be her friend. She wrote this...