1.What is an internal analysis?

The goal of an internal analysis is to identify the strength and weaknesses of an organization. An internal analysis also focuses on reviewing the resources, capabilities, and competencies of a company. It gives managers a very specific look on what is going on within the company. For developing a strategy a company also have to do an external analysis to get to know more about their opportunities and threats (Hill & Jones, 2008).

By doing an internal analysis an organization receives information about certain advantages and disadvantages in meeting the needs of its target market.

Don't use plagiarized sources.
Get Your Custom Essay on Internal Analysis Mtv Just from $13,9/Page

Strengths refer to core competencies that give the organization an advantage in meeting the needs of its target market.

Any analysis of the strengths should be market customer focused because the strengths are only useful when they assist the organization in meeting the needs of the customer. Weaknesses refer to any limitation an organization faces in developing or eventually implementing a strategy.

Weaknesses should also be based on the customer because they often perceive weaknesses that an organization is not able to find by themselves (Internal Analysis, N.D.).

As mentioned in the book of Hill & Jones there are three steps in the process of building up an internal analysis: 1. Managers must understand the process by which companies create value for customers and profit for themselves, and they also need the understand the importance of resources, capabilities and distinctive competencies in this process.

2. The managers need to understand the importance of superior efficiency, innovation, quality, and customer responsiveness. They also need to know how they are creating value and generating a high profitability for the company. 3. The managers must be able to analyse the sources of their organizational competitive advantages. This is important because they need to identify what is driving the profitability of their enterprise and which things they can improve (Hill & Jones, 2008).

The company Time Inc. revealed that while the company had strong well-known brands such as Fortune, Money, Sports Illustrated and People (strength), and strong reporting capabilities (strength), it suffered from a lack of editorial commitment to online publishing (a weakness).

2.What internal analysis models are there?

There are seven internal aspects of an organization that need to be aligned if it the organization wants to be successful. The 7S model can be used to improve the performance of the company, to examine the likely effects of future changes within a company, to align departments and processes during a merger or acquisition or to determine how they can implement a proposed strategy in the best way for example (The McKinsey 7S Framework, N.D.).

This model is also used for doing an internal and external analysis but it works almost the same as the SWOT-analysis. Things to use here are the C of Core Competencies: unique strengths and abilities of the business which provide the fundamental for the provision of added value to customers and are critical to the delivery of competitive advantage (The SCOPE planning model – an alternative to SWOT analysis, 2011).

The four building blocks of competitive advantage are efficiency, quality, innovation and responsiveness to consumers. These are generic distinctive competencies. Superior effiency enables an organization to make the costs lower; superior quality allows it to set higher price and also lower the costs; and superior customer service is needed because then you can maintain the high prices. Superior innovation can also lead to higher prices, particularly in the case of product innovations, or lower unit costs and in the case of process innovations (Hill & Jones, 2008).

Another model to do an internal analysis is the value chain of Michael Porter which is described in question 6. There are several other models to explain but I thought this were the most important models.

3.Apply on MTV
I choose to do simple a SW-analyse of MTV to get to know more about their strengths and weaknesses:

– MTV has a very strong brand name. – MTV has a very specific target groups: teenagers and younger adults and this is very attractive for advertisers. – MTV really adapt their different formats to the people that are looking. The language is natively spoken and people like that because the meaning of the programmers is easier to get. – Their collaboration with mobile providers to be first on the mobile phone market with MTV Mobile. They also started their own service named MTV Mobile and they try to reach their consumers with this new medium.

– Their digital music distribution service offers a lot of opportunities to their customers and they can download music. – They are market leader as a music channel and so they don’t have to deal with competitors too much (MTV: business model dillema, 2007) (25 Years Down the Tube, 2006).

– MTV is not really attractive for people that are over 30 years old. – Consumers go to YouTube when they want to see upcoming artists. – As we look to reality television there is a lot of competition from other channels. – A lot of people don’t like MTV anymore because they are mainly showing reality and people also want to still see music videos on a music channel.

Younger audiences are mainly looking at things on the internet and the medium television is slipping away so MTV has to make something to entertain their younger audiences. – MTV doesn’t have a real mission and vision and this is causing problems because now they don’t know what they really want. – MTV doesn’t offer a lot of different genres of programs to entertain their viewers so they might get bored after another reality show (MTV: business model dillema, 2007) (25 Years Down the Tube, 2006).

4.What is a business model?

There is no real definition of a business model as the usage is varies by sector and professional specialisation. A business model is a model about how the combination of costs will be covered, the value proposition for customers and which income there will be generated (Küng, 2008).

A business model is the plan implemented by a company to generate revenue and make a profit from their operations. The model includes several components and functions of the business in the organization. It describes the way how a company makes money. The business model can be very simple but also very complex, this depends on the company.

Some organisations are making money by providing a free service and they are then often selling advertising to other companies. When an organization is doing this the business model is more complex than for example a restaurant. They only have to make money by cooking and serving food to their customers. So they directly sell their product/service to the customers (Business Model, N.D.).

The business model of MTV offers low risk and high returns. It was based on exploiting content that was attractive to a segment cherished by advertisers (teenagers) but very inexpensive (videos were a promotional tool that were financed by musicians and their companies). So, MTV’s advertising rates could undercut competitors and still generate healthy cash flows, even if audiences were modest (Küng, 2008).

5.What is MTV’s current business model?

6.What is a value chain?

To analyse the specific activities through which organisations can create a competitive advantage, it is very useful to use the value chain. It is developed by Michael Porter and he identified a set of interrelated generic activities that can be used by a wide range of organisations. The overall goal of the value chain is to create value that exceeds the cost of providing the product or service but generating a profit is also very important (The Value Chain, N.D.).

The value chain contains of the following things:

7.What is MTV’s value chain?
There is a traditional value chain that you can apply to the television industry. Nowadays this value chain is not used often anymore because of the technological changes and other influences.

Because of the technological changes the traditional value chain is extended with two extra steps:

So, for MTV the value chain would look something like this:

MTV creates content and acquisition, in the scheduling phase they look to the competition and try to differ from them. In the distribution phase MTV offers their content to the consumer on various mediums (Küng, 2008) (Hill & Jones, 2008).

8.What is the target group of MTV?
The target market of MTV would be the local population with age ranging from 18 to 34. Furthermore, it has target audiences as well as in the different sectors of the society like parents, elders and politicians for example. These sectors influence how programs are relayed through them. Also, MTV caters to the upper part of the youth in terms of financial brackets. They want to connect these people with things that are hip, trendy but also informational (MTV Case Analysis, N.D.).

How can MTV optimise their value chain in order to stay competitive? They have to adapt the new value chain of the television industry. There is a new step that is named packaging/aggregating between content creation and scheduling. There is also a new step called user interface. In this step it is all about the device that is needed for the consumers to get access to the features of MTV. This step is very important because it is all about contact with the consumers here and they have to be satisfied by MTV.

The last years MTV is broadcasting more reality and entertainment than music videos. This is more expensive because when they only broadcasted music videos the artist or the label were paying this. MTV has to seek opportunities to make their production costs lower in the future. Maybe it is a plan to show more unique live shows on their channel because people often like to see their favourite artists playing a concert. When they do this the music thing in MTV is also not as lost as it nowadays is. 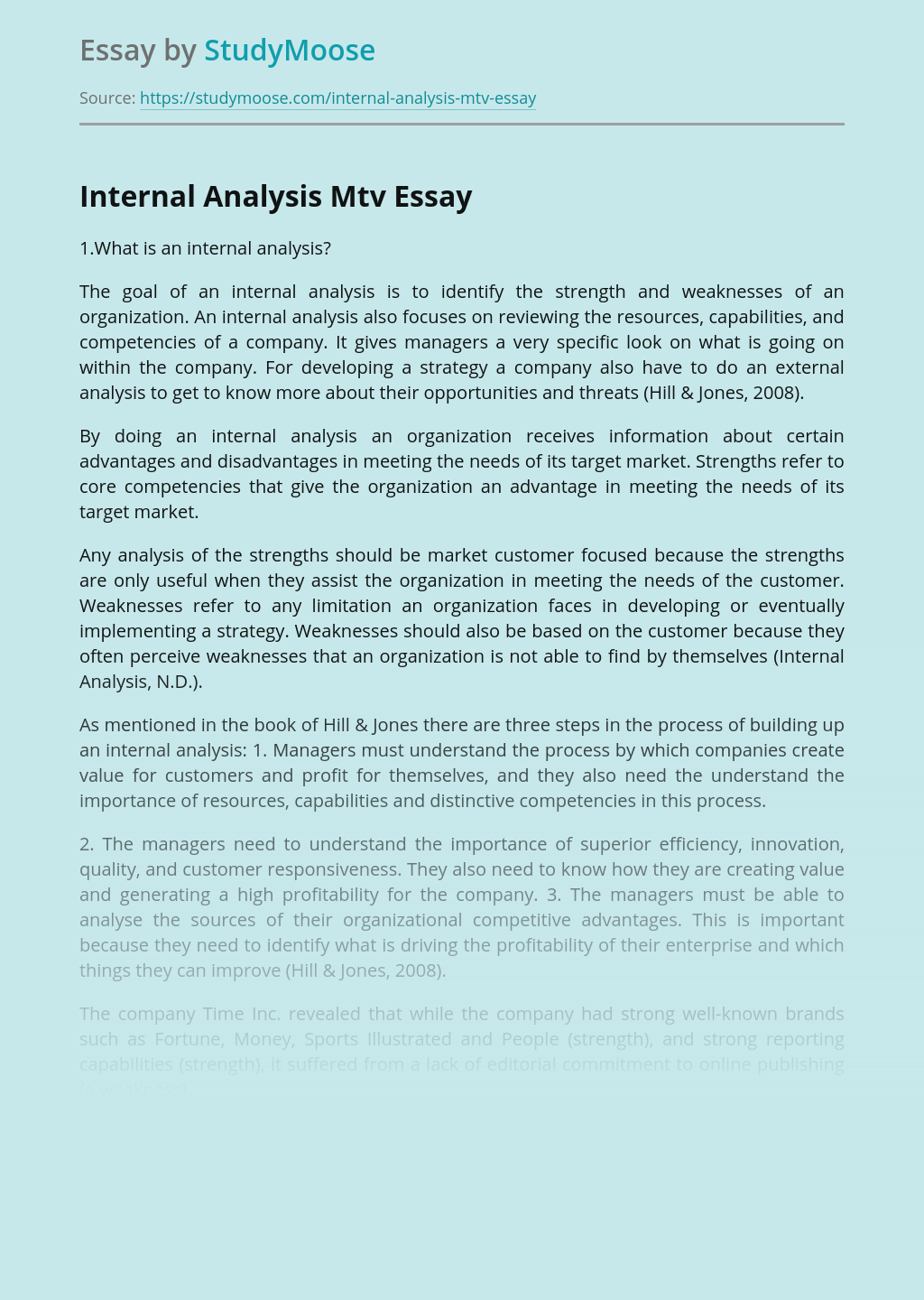 I) Introduction In order to compete in the world of rising globalization and shortening of product life cycle nowadays, firms have to deal with the demand for increasing product variety to meet the diverse needs of customers. Mass customization has become a requirement for many businesses especially in the dynamic, fast-changing industries. However, the more...

The movie presented an instance of the reality of contract killings, abuse of power, corruption and poverty. I know about these issues, but only after watching the movie did I realize that what I know were limited. And with the things that I’ve seen and learned, I can’t help but feel troubled and miserable. Having...

A natural disaster is a major adverse event resulting from natural processes of the Earth; examples include floods, tsunami, volcanic, earthquakes, tornadoes and other geologic processes. A natural disaster can cause loss of life or property damage, and typically leaves some economic damage in its wake, the severity of which depends on the affected population’s...