Power is believed to be the capacity of individual to exercise control over other people and resources. Power is a tool that has both positive and negative outcomes depending on how it is applied (Visagie, 2006). The ability to exercise power derives from various sources ranging from economic, political and social dimensions. For instance in many nations varying economic status determine who gets what and when. A sociologist such as Karl Marx in his conflict perspective outlines how power relationships continue to heighten the wrangle between societal classes.

Don't use plagiarized sources. Get your custom essay on
“ Intercultural communication and power distance ”
Get custom paper
NEW! smart matching with writer

There are various types of power ranging from political, cultural and economic.

Social factors such the norms, values and believes in a society determine control over resources.in most societies men are given priorities to women in matters pertaining leadership. The girl child for example has been undermined in most societies (Castells, 2007). Power is left in the hand of men with women even looking down at themselves. People continue to conform to these values even in the current period.

it is inherent that the capitalists will continues to exploit the poor. Karl Marx proposes a transition from capitalism to socialism and later

Political factors also signify a power source. The leaders exercise control over the natives, a lot of resistance is expected from the leaders as they try to cover their status quo.Political power can be acquired in various ways for instance through coercion, voting among others. Politicians are well known to use their convincing strategies to obtain power and

The concept of power distance

In states having high power distance those who are not powerful take power relations that are more monocratic. The inferior appreciate the authority of others easily based on where they are situated in certain formal standards.

Higher power distance countries believe that inequality is good, everyone has his or her own place, people should depend on their leader, and that the powerful should not hide their power and are entitled to many privileges. For instance, even if one was to want to be promoted in their current positions, it will be inappropriate to ask their employer for such promotion. If the employer wanted to give their employee a promotion, they would, and the employee has absolutely not affectionate to the issue.

Studies claim that Saudi Arabia experiences the highest power distance in the world. Various reasons explain this power distance, the main one being religion for instance if one is not a Muslim the law requires that he cannot be permitted to enter the country without an invitation or even leave without a permit. Visitors are expected to adhere to same laws as Saudis. The Islamic conviction widens this power difference and promotes that those in leadership position should remain.

Moreover psychological and sociological reasons fuel the higher power distance. Social values and norms are passed from parent to children through the process of socialization. For instance Saudi Arabians advocate that obeying the mighty and supporting the leadership is of much importance (In Hopkins & In Ibrahim, 1997). This calls for following of orders without questioning where any disagreement with the leader’s decision is regarded as rebellion. The Saudis have been all through internalizing this power distance as their cultural practice.

Following the high power distance in Saudi Arabia a lot of inequalities have continuously manifested with the most prominent being uneven distribution of wealth. Saudi Arabia also is highly ranked in terms of purchasing power differential. The gap between the purchasing power of the rich and the poor is quite wide (Al-Saud, 2003). This clearly shows that the income is unevenly spread within the society.

The power distance also influences laws and regulations owing to the inadequate authority the regime has in Saudi Arabia (In Hopkins & In Ibrahim, 1997). The natives have a strong notion that mighty will dissociate themselves from the group but this is not challenged by the population. The power distance also affects contractual relationships. Reidenbach and Robins (1988) explores how variances on two of hofstede’s national culture dimensions, collectivism and power distance are articulated to the way firms make ethical decisions.

Power Distance in other nations

While all nations and values are cannot be compared, the range of disparities keep changing from culture to another. The reported low power distance in the United States of America is no surprise. The Americans emphasize on liberty and justice for all the people including both those in leadership and the American natives. This is also shown through the continued emphasis of equal rights in every aspect of the United States leadership and community. Within American organizations, organizational structure is developed for purpose of convenience, leaders are always reachable and managers rely on individual employees and teams for their practices. Managers and employees expect to be discussed in any process that entails critical decisions, and information is interchange within the different levels of leadership and authority. Alongside this, communication is formal, direct and touching all the national levels.

Although power distance may appear unimportant when moving to a new cultural environment, knowing how it impacts an individual could be of importance (theory of plane crashes).even though power distance may be regarded unnecessary in intercultural communication it is important knowing the best time and best method to converse with one another. The process of transition from one culture demand Saudi Arabia to establish an effective channel that will ensure the power distance is reduced as much as possible. The theory of the plane crash explains in detail why intercultural communication is of importance in dealing with power distance. 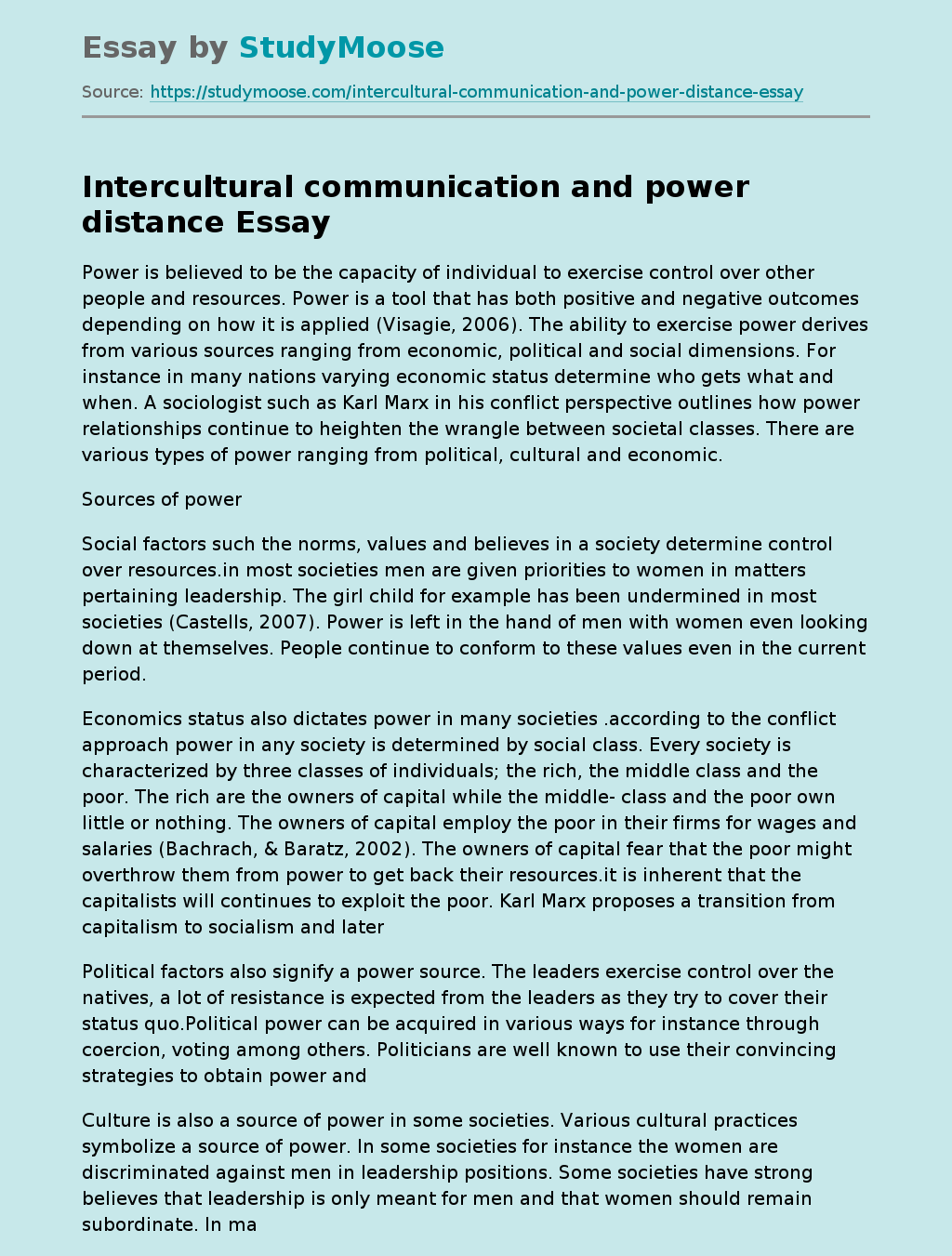