Have you ever really stopped to think about diversity? The typical individual usually thinks of different skin colors or the different backgrounds everyone has. By definition diversity is the condition of being different. The term ‘diversity’ encompasses a broad scope. There are many realms to diversity such as economic, cultural, and gender. However a type of diversity that has been growing in buzzword in recent years, especially among the conservative communities of college campuses, is intellectual diversity. Intellectual diversity, along with ‘academic freedom’ is what activists like David Horowitz characterize as being the equal treatment of an individual, regardless of political affiliations or religious beliefs.

The leftist tendencies inherent in academia are of course not a new development, though they have been better-documented as of late by conservative writers. The issue that these writers discuss is how intellectual diversity is threatened in these different environments through partisan politics as well as the liberalized environments themselves.

The issue of intellectual diversity is a quandary that the government must deal with carefully.

They cannot simply issue strict laws regarding the protection of intellectual diversity on campus because this does not satisfy what everyone wants and more importantly what they need. The government, as well as these conservative activists has to realize that there will always be a liberal opposition in the world. They must recognize that although it is completely just to fight for equal treatment and opportunity for people with different views, it is not ok to shield these people from the opposing liberal perspectives completely because that limits the individual to not be able to explore the different ideas in the world and learn to embrace the opposition.

It will ultimately limit them from being able to become a well-rounded and educated person.

Conservative students are being crushed in liberal campuses and in classrooms where teachers have different views. Case after case of liberal activism and indoctrination has been publicized by conservative activists. This is because activists like David Horowitz have realized the effects of a liberal atmosphere, and biased teachers. In “Schools of Reeducation”, Frederick M. Hess touches on the topic of a young college student of Washington State, Ed Swan, a conservative Christian father of four that was flunked with the explanation that he “revealed opinions that have caused me great concern in the areas of race, gender, sexual orientation and privilege.”

In David Horowitz’s “In Defense of Intellectual Diversity” students from the University of Denver and Duke are described as having to deal with seeing partisan propaganda posted on doors and hallways as well as joking warnings from teachers that say that any Republicans should drop his course because of his strong “liberal” opinions. Because of these and many other displays of liberal dominance in college campuses, conservatives are starting to take a stand, Mr. Horowitz for example wrote the “Academic Bill of Rights”. The way conservatives are placed in such hostile environments is not fair, just, or virtuous, it is impartial and nonpartisan.

The government must be extremely scrupulous in the ways they deal with intellectual diversity and the laws they implement because it could have negative impacts on the professors and administrators of colleges and universities. In “The Right to Tell the Truth”, Ann Marie B. Bahr retells her story of a terrible experience she had undergone when teaching courses on world religions at South Dakota State University. Students inspired by David Horowitz’s “Academic Bill of Rights” literally induced the poor teacher to fear her job. She felt that they forbade her to express an informed professional opinion. Bahr, a women completely qualified to teach the course was unable to, because if she ever said anything that her students didn’t agree with they simply dropped the course. I don’t believe David Horowitz would support such behavior arousing from his bill, but this is why the government must be extremely careful, prudent, and meticulous when dealing with such a delicate issue as intellectual diversity. Where is the justice in scaring teachers to falsify the truth? Or sacrifice their right to have and informed professional opinion, there is none.

Conservative students must not be shielded from the liberal opposition because it debilitates them from learning how to deal with it; it won’t broaden their minds to new ideas and instead will hold them back from becoming the educated, well rounded, less biased individuals that they have the potential to become. The population that Mr. Horowitz’s “Academic Bill of Rights” is directed towards is the unfortunate conservative students who are put at a disadvantage due to the ‘hostile environments’ where liberal propaganda roams free and biased liberal teachers treat them unfairly. But the thing is that these students many times don’t break down and crumble at the feet of this liberal monster, but instead grow from the experience. The students come out stronger in the end after going through such a hard experience.

They are able to become strong minded, and intellectually powerful. No college student should ever be put in an unfair situation where they are scared to think and say what they want due to their surrounding environment, or are not able to attain the same grade as a colleague because of their personal beliefs; but they also shouldn’t be protected like a mommy with her baby because in the real world there will be those strong minded liberals that you will have to face and converse with, and they need to have already experienced liberal feedback in their lives in order to be able to respond back effectively. Again the government must be careful not to just create strict laws that protect intellectual diversity. The level of intensity of these laws must be restricted in order to allow the conservative individual to still grow as a human being.

As in many controversial arguments both sides of intellectual diversity bring up valid points. The side for intellectual diversity argues that we all have the right to have different political, religious, and social views, but regardless of what they are still be treated equally. The side against intellectual diversity argues that if the government enacted strict laws to enforce it, this would lead to negative impacts on professors and administrators of college campuses as well as debilitating students from experiencing real world conflicts and learning from them. The truth is that both sides of the argument are correct and there is sufficient evidence to prove both points. We the people must not allow one side to emerge from this conflict victorious, because this will leave the other side out to suffer the storm. Instead we must compromise between the opposing views and find a way to work in concert in order to find a solution that benefits both sides equally.

There are many realms of diversity however the one that always seems to be the most controversial, and difficult to solve, is by far intellectual diversity. The fight over whether intellectual diversity should be enforced by the government is not a new one. This is an ongoing conflict that recently has spurred heated debate, now the time has come to solve this problem. It is the single most important responsibility of the government to protect the people, therefore the government not only has the right to create laws on this issue but it is its obligation. However the government must recognize that there are indeed two sides, and it must not show sympathy for either one but instead compromise between the two to find a middle ground that will satisfy both sides.

The solution therefore lies in reconciliation. The government must enact a law that protects the intellectual diversity of students however this must be done in a scrupulous manner so it does not have a negative effect on college professors and administrators; perhaps even creating a law that protects this population as well if necessary. The government must also limit the intensity of the law; students must not be completely shielded from opposing views, for that would be a disservice to the students, whose growth as person would be limited from a strict law. As best put by Harvey Mackey, “Nobody said it would be easy, they just promised it would be worth it.” 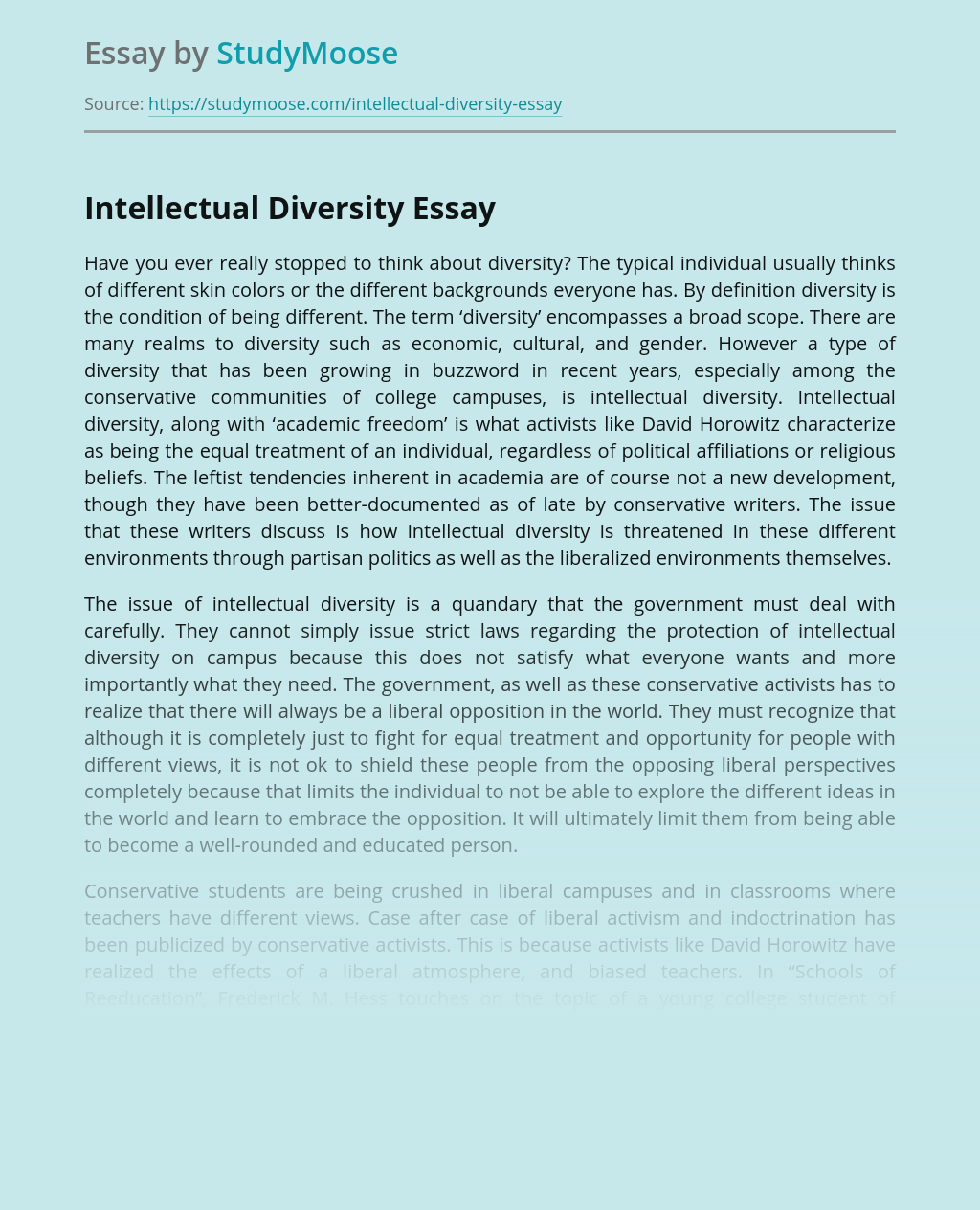