Institutional racism and racial discrimination in the U.S. health care system has been part of a long continuum dating back over 400 years. After hundreds of years of active discrimination, efforts were made to admit minorities into the “mainstream” health system but these efforts were flawed. Colin Gordon in his book Dead on Arrival portrays a very strong stance towards this issue when he states, “The American welfare state has always been, at root, a Jim Crow welfare state – disdainful of citizenship claims of racial minorities, deferential to a southern-controlled Congress, and leery of the racial implications of universal social programs” (172).

Don't use plagiarized sources. Get your custom essay on
“ Institutional Racism and Racial Discrimination in the U.S. Health Care System ”
Get custom paper
NEW! smart matching with writer

It is evident that throughout the history of U.S. health care that race has shaped health provisions in a number of ways, most noticeably in private and public health care institutions. Gordon throughout his books discusses the ways in which institutional racism, specifically in the field of healthcare, has manifested itself throughout history. One of the most prominent manifestations of institutional racism in the healthcare field comes to light when examining past (and sometimes present) policies regarding admission (to healthcare facilities) and discrimination of minorities.

It is evident when observing the adoption, administration, and implementation of these policies in the past that they were purposefully constructed to be exclusive of minority citizens (specifically African Americans and Latinos). Gordon gives an example of such policies in 1939 under the Social Security reforms. In the formative years of the New Deal southerners in Congress pushed for and won for the exclusion of agricultural and domestic labor from coverage under the National Recovery, Agricultural Adjustment, Social Security, National Labor Relations, and Fair Labor Standards act, this affectively excluded 90 percent of the southern black workforce (185).

The implications of this act of agricultural exclusion are most clearly evident in the South and Southwest—regions whose economies were dominated by agriculture, who agriculture systems were peculiarly labor intensive, and whose agricultural labor markets were organized around low wages, tenancy, harsh legal controls, and violence.

Gordon argues that segregation persisted in medicine and hospitals longer than in any other public institution or facility partly due to the fact that Southern Congressmen pushed for local control of any federal expenditure; and later on this pushed Southern and Southwestern leaders into a partnership with doctors, employers, and insurers to keep racial minorities excluded from the health system. Southern interests led to a push for job-based private insurance, locally administered subsidies for hospital construction, and penurious charitable programs for those left behind, “southerners persistently worked to exclude African Americans from coverage, tap into federal funds without sacrificing local practices, and ensure that charity programs remained under local control” (174).

Employment-based benefits, initially developed as a surrogate for national policy, was successful in leaving behind the majority of African Americans and Latinos due to the fact that they were grossly underrepresented in the unionized industrial economy, and in part because benefits such as these did not extend to casual or domestic or agricultural workers. Private health benefits came to be looked upon by many Americans as a “wage of white-ness” (176). Federal agencies, both out of practical and political necessity, consistently surrendered control over federal funds and standards over to state and local administration, “states set their own standards for care and eligibility and controlled the pace and scope of federal matching funds.

Local political and medical authorities wielded considerable informal power and discretion” (187). In 1948 the Brookings Institution published a book-length assault on health reform. The conclusion of this publication was that higher black mortality rates are “predominately the result of economic, cultural and social differences” although, the research for this publication based cost estimates off of the ordinary expenditures of white families and confined comparative mortality rates to the white population, this led to them to conclude that the United States was among one of the most healthful nations in the world (188).

Seconding this conclusion and also asserting that higher rates of non-white mortality were due to such things as poor sanitation, housing, education, and the lack of ordinary individual and community common sense was the AMA. The partnership between these two organizations is evident. At the root of the hospital issue in the South was not only professional and patient segregation but also the way in which it was countenanced by federal efforts to address the region’s dearth of facilities.

What is shown here is the long-standing political strategy to try and appease reformers by granting federal funds but to simultaneously placate opponents by relinquishing control to local or private interests; federal aid to hospitals both in 1940 and under the 1946 Hill-Burton Act “avoided any commitment to maintenance: once built, hospitals would reflect local control and local custom” (193). This however did nothing to prevent segregation seeing as in order to be considered nondiscriminatory a hospital was only required to grant equal access to the portion of the hospital that was built with federal funds.

Perhaps the most compelling public health issue during the formative years of the American welfare state was the dismal status of rural services. In places in the South and Southwest and the nation’s inner cities basic services such as a hospital, public health clinic, and a doctor accepting Medicaid patients did not even exist. Gordon offers the example in Mississippi in 1948, there were only five general hospital beds for every 100,000 blacks in the state—at a time when four beds for every 1,000 citizens was considered adequate (175).

It is evident that health care in the twentieth century has been shaped by a myriad of “direct and indirect discrimination, strong southern interests and local administration, the uneasy intersection of public and private (job-based) benefits, and the sharp political distinctions routinely drawn between contributory and charitable programs” (209).

According to the U.S. Commission on Civil Rights, “Despite the existence of civil rights legislation equal treatment and equal access are not a reality for racial/ethnic minorities and women in the current climate of the health care industry. Many barriers limit both the quality of health care and utilization for these groups, including … discrimination.”

Importance of Health Care
Access to comprehensive, quality health care services is important for the achievement of health equity and for increasing the quality of a healthy life for everyone. Access to health services entails the timely utilization of personal health services in an effort to achieve the best possible health outcomes.

The utilization of and access to health care has many substantial impacts on a person’s life. A person’s overall physical, social and mental health statuses are all impacted by the ability to be examined and treated by a medical professional. Health care also plays a significant role in the prevention of disease and disability, the detection and treatment of health conditions and a person’s quality of life. A structured healthcare system assists in providing a foundation for a healthy lifestyle for both individuals and their families. Without access to healthcare, minor health issues have the potential to escalate either permanently affecting living standards or worse resulting in death.

The health care sector also has an impact on the local economy. Health care facilities such as hospitals and nursing homes provide jobs and income to people in the community. As these employees spend their income in the community, a ripple spreads throughout the economy, creating additional jobs and income in other economic sectors. Also, providing healthcare may also be a business incentive to companies. Healthy employees can mean a healthier, happier, more productive workplace.

A company’s decision to invest in and offer health care to their employees not only filters back into the economy but also may help them to recruit and retain quality employees, improve employee satisfaction, and reduce absenteeism due to sickness. Business that offer health insurance as part of their employee benefits package are probably better able to attract more qualified applicants than those who don’t. Also, offering health insurance coverage is a way of keeping operating costs low, because employees are generally more apt to take a position at a lower salary when health insurance benefits are provided.

This is because it generally costs more for someone to obtain an individual or family health insurance policy than to get employer-sponsored coverage, making the difference of a lower salary negotiable. Businesses offering health insurance can deduct their portion of the contribution toward their employee plan as a business expense and get a tax advantage. If the business is incorporated, the business owner’s insurance and the coverage paid for employees are deductible. Access to health care services and insurance plays a vital role in individual and families lives along side society as a whole. 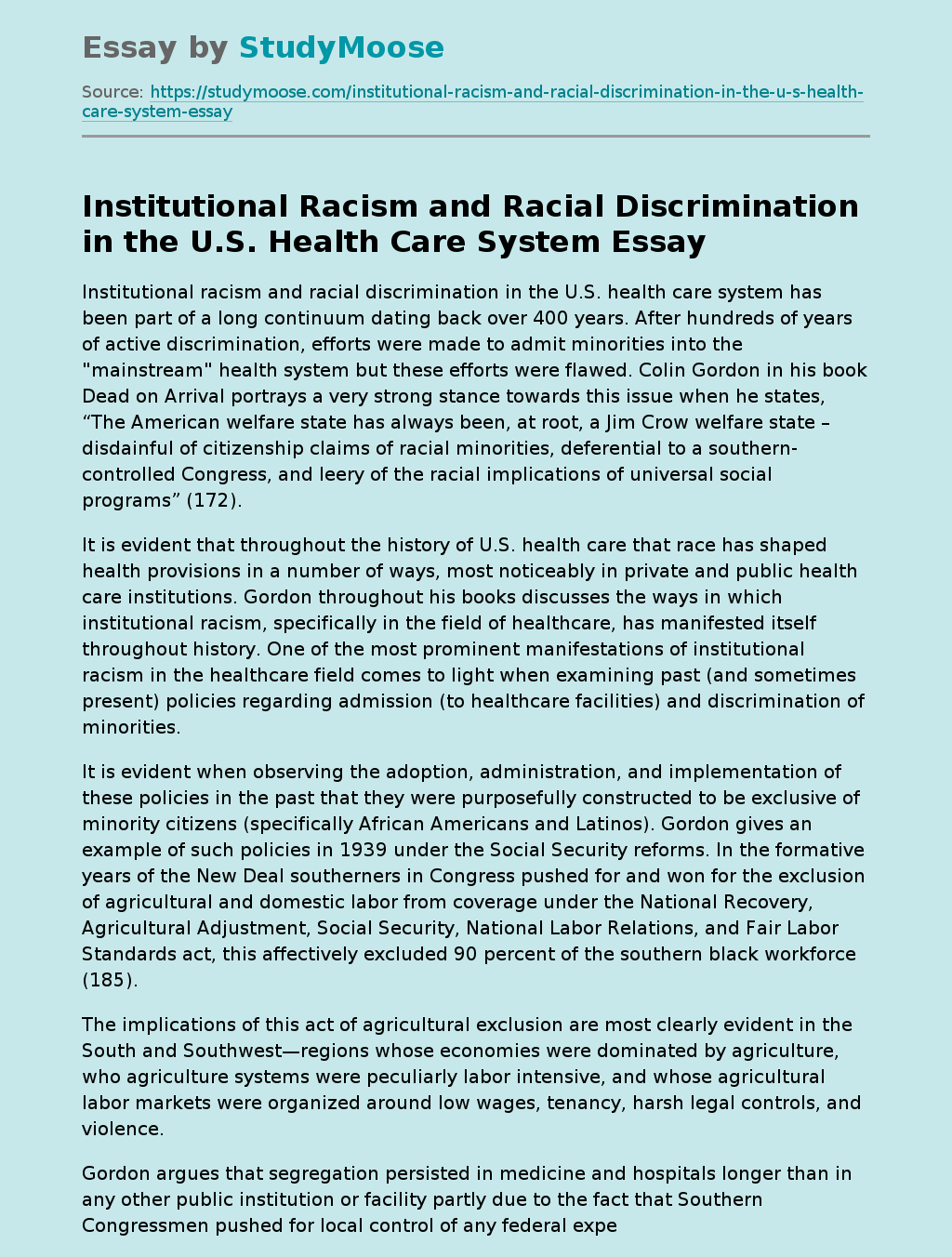