To Kill a Mockingbird

In “To Kill a Mockingbird” Atticus finch used many quotes to instill conscience on his children. For example: “You never really understand a person until you consider things from his point of view – until you climb into his skin and walk around in it. ” That means that you shouldn’t judge someone until you really know how they are feeling on the inside. He also uses: The one thing that doesn’t abide by majority rule is a person’s conscience.

” That means that your conscience doesn’t really tolerate. He also uses: “Bad language is a stage all children go through, and it dies with time when they learn they’re not attracting attention with it.

That means you only curse of use profanity for attention. Atticus Finch demonstrates his love for Jem and Scout by providing them with an education. For example although Scout doesn’t like school enough to pretend to be ill, Atticus keeps urging and convincing her to go to school.

Atticus loves his daughter enough to see that getting an education is really important. However, instead of forcing her rudely, he gives her the choice of whether or not to succeed in life, but at the end Scout knows she must consider his opinion and what her father says.

In addition, Atticus teaches Scout how to read at an early age and continues to help her practice by reading the newspaper with her every evening. This takes time and he is such a busy lawyer, time is needed for Atticus.

Reflecting on what Atticus has done for his children in the novel “To Kill a Mockingbird”, we can see that he cares very much about Jem and Scout’s futures, and this shows us he really loves both of his children. By providing his children with a relatively excessively amount of freedom, Atticus demonstrates he wants his children to feels free as long as they respect people.

For example, Atticus does not limit who Jem and Scout consort with to those who have respectable family backgrounds. Atticus allows his children to judge all people equally and choose their friends or themselves. This is a very special privilege considering that the Finch’s live in southern Alabama, where most people were still prejudged toward African Americans after slavery. Looking at the prestigious Finch family background, we can also see the importance of the privilege. In addition, Atticus allows Scout to dress herself and choose her own clothes as she prefers.

She of course dressed herself like a boy and around that time girls were expected to dress like “ladies” (lady like). Giving his children the right to live their lives with their own power of will or choice, Atticus shows compassion for his children by giving them responsibility and making them responsible. Atticus Finch is a typical man, but as a parent Atticus proves to deviate from the main swing of the Maycomb society. The Maycomb society dictates that children are raised in a traditional matter. The children should do everything they are told and all thoughts they may have are worthless and have no meaning.

Atticus does the opposite of the basic principle of the Maycomb society. He lets Jem and Scout to commit their own volition and provides with as much freedom as anyone else. Although his children don’t like going to school, Atticus guides and gets them through long and boring school years. In conclusion Atticus’s methods of raising his children and shoeing his love and respect for them definitely affected their personalities and behavior. In the book “To Kill a Mockingbird” Atticus is a man who believes in doing the right thing. He takes on the job as Tom Robinson, a black man accused of raping a white woman.

He does not know if Robinson is innocent or not at first, but he knows that defending him is the right thing to do. Atticus is well aware that by taking the responsibility as Tom’s lawyer it will not be a popular decision. By taking his position he teaches his children about social responsibility, courage, and taking a stand against something even if you have to stand on the opposite side of the moral majority. Atticus is such a fair and honest man who shares so much wisdom with his children through his actions. Atticus teaches his family that one cannot prejudge people.

Just because they may be Cunningham’s, or Mr. Raymond, doesn’t mean the assumptions that people hear are true. They learn to not fear and hate Mrs. Dubose, when Atticus forces Jem to read to her. Their assumption that she was a mean old lady does not let them see why, until she passed and Atticus explains that she was fighting a drug addiction and was constantly in. When Scout punishes Walter because the teacher did not understand about the Cunningham’s ways, he is invited to come to dinner at the Finch’s house. After her teasing him about her ways, she is quickly discipline by both Atticus and Cal about her manners towards others.

Atticus is a man of with a strong sense of equality and fairness and tolerance. He decides to accept defending Tom Robinson (a black man) he receives the case and decides to take action, despite the way his neighbors and the community think, He pushes his family to stand by him without violence towards the people that disagree with him protecting Tom. In essence he teaches his children to tolerate those from other races and do what is right regardless of one’s color, even if it may be received poorly by ones community.

He also teaches Jem and Scout the importance of standing up for what you believe in. t is through defending black man Tom Robinson that Atticus knew that there was little chance of acquitting Tom but he believed that he could somehow make a difference in the way that black people were prosecuted. Atticus knows that helping Tom is the right thing to do and thus, carries out the job he accepted. The children are taught this through Atticus’ most famous quote “shoot all the blue jays you want… but remember it’s a sin to kill a mockingbird”, the mockingbird relates to different characters in the book including Tom Robinson.

Atticus also uses the children’s obsession with Boo Radley to teach them to tolerate those who are different. Thus Atticus teaches everyone how to tolerate others and how to stand up for what is right even if it may be unpopular. The children’s biggest assumption is found to be false, because Boo Radley, the man that ate squirrels saved them. The children are taught this through Atticus’ most famous quote “shoot all the blue jays you want… but remember it’s a sin to kill a mockingbird”, the mockingbird relates to different characters in the book including Boo Radley.

The mockingbird is compared to Boo Radley as at the end of the novel when he rescues the children from Bob Ewell, Heck Tate tries to convince Atticus that it was not Jem who stabbed Bob but Boo. Boo is extremely timid and frightened and thus, Heck sees no point in prosecuting him as it would bring him into the limelight and he would have to testify in front of many people. Heck feels that the dead and dealt with the dead and strongly believes that no further negotiation is needed. Courage is the most important lesson taught to the children in this lesson.

To Kill a Mockingbird. (2016, Sep 20). Retrieved from https://studymoose.com/instilling-conscience-to-kill-a-mockingbird-essay 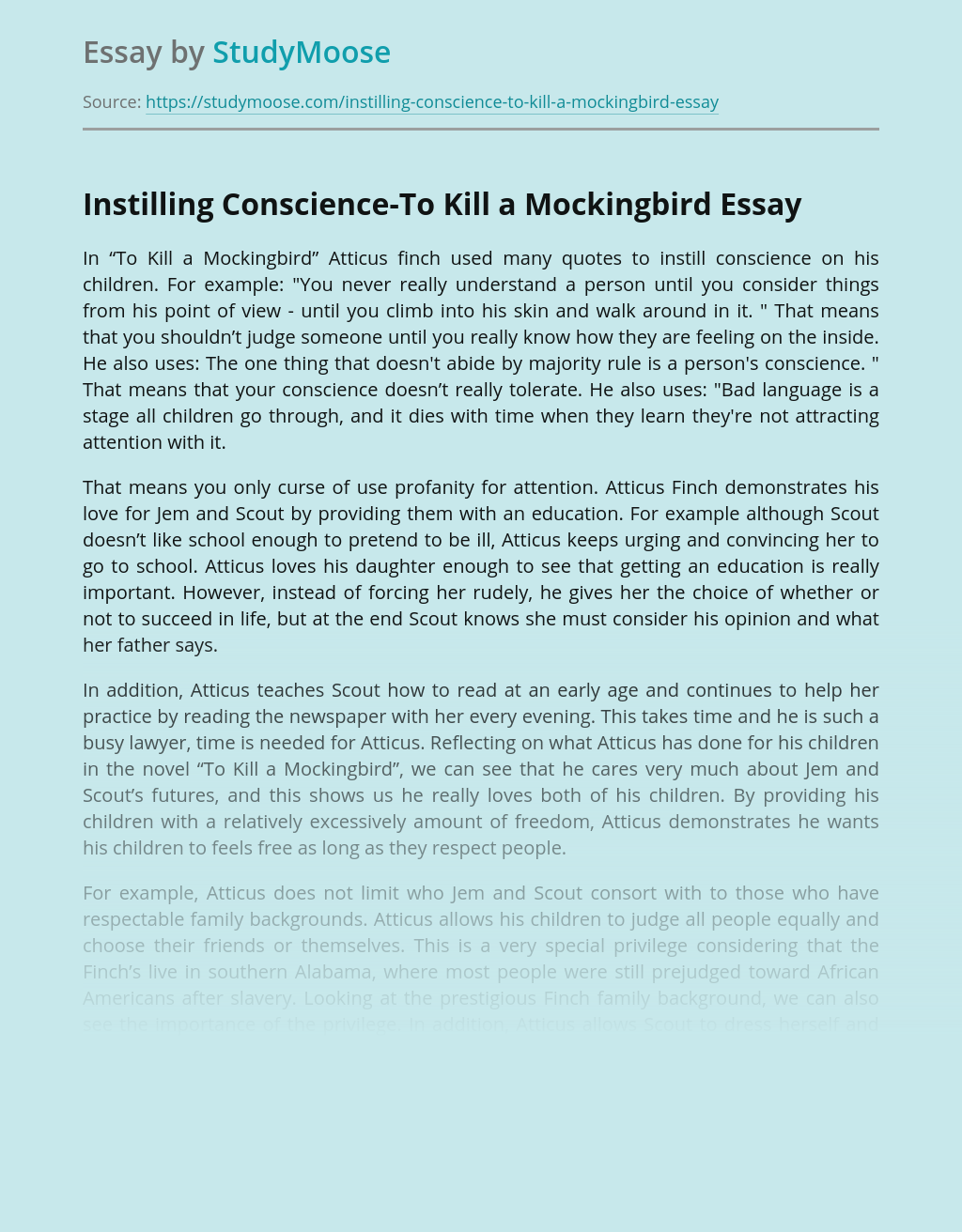 Anita Desai (born 1937) has been touted by “British Writers'” A. Michael Matin as “one of the preeminent contemporary Indian novelists,” even referred to by many as the Mother of the Indian psychological novel genre. Her meticulous depictions of modern Indian life, combined with an elevated level of linguistic skill that frequently enters the poetic...

Siddhartha, by Hermann Hesse aligns perfectly with the genre of a bildungsroman. Why? Because Siddhartha grows as a person from youth to adulthood throughout the story. He leaves his home looking for answers and experience trying to achieve Nirvana. Siddhartha’s unhappiness makes him leave on a journey looking for enlightenment. In a bildungsroman, the goal...

And makes one a bard! —that was the situation in which the lovers, Pierre and Marianne found themselves placed at the altar of love. A novel is the mirror of the feelings of the writer’s mind. One may cleverly try to hide and suppress one’s true feelings by super-imposing imaginings. But the authors are bound...

Bartleby the Scrivener could be referred to as a story about eliminating its title character, about the narrator’s attempt to get rid of Bartleby, and Bartleby’s solid capability to be constantly there. It is the story of an unnamed attorney and his staff member, Bartleby, a copyist of law files. Faced not just with Bartleby’s...

Mark Twain’s book is a novel that follows the juvenile life of a small young boy. You will see just how much fun the main character, Tom, and his pals have by skipping school, fishing, swimming, and utilizing with their imaginations to have a great time. The Experiences of Tom Sawyer is a traditional book...