In the essay, Inspired Eccentricity, it is clear that bell hooks had two very unconventional grandparents. In the relationship of Baba and Daddy Gus, role reversal was visible in almost every aspect of their lives. As the author said, Baba and Daddy Gus were, strangers and lovers – two eccentrics who created their own world. They were a combination that perfectly completed each other, yet every part of their separate lives was equally important to their successful marriage. Bell hooks wrote, They lived close but they created separate worlds.

Don't use plagiarized sources. Get your custom essay on
“ “Inspired Eccentricity” by Bell Hooks ”
Get custom paper
NEW! smart matching with writer

I found a few examples of role reversal in particular that caught my eye. One of those was the masculine and harsh tone in which Baba talked. This was shown when the author wrote, she talked endlessly. She preached. She yelled. She fussed. Daddy Gus was the exact opposite – quiet, calm, and a gentle man – showing no opposition to, as bell hooks said, her vitriolic rage. That presented a clear distinction in role reversal in their relationship.

Another sign that showed role reversal was evident in the arguments that occurred. As bell hooks stated, Every shared talk begun with goodwill ended in disagreement and contestation. Everyone knew Baba just loved to fuss. Daddy Gus would sit calmly in his chair when being yelled at by Baba, and when he had enough he would get his hat and leave. Baba was raucous and demanding. She was not afraid to stand up and speak up. In fact, Baba loved to cuss and have a, good war of words as the author wrote.

When those words were notPuckett 2enough, she would use a belt. The author could not find this type of violence in Daddy Gus. She found love being held in his open arms and infinite, affectionate kisses.

Another example that showed role reversal was the way in which Baba and Daddy Gus conducted their daily activities. While Daddy Gus was out and about conducting the affairs of the world, Baba was teaching the author her outdoor skills. She loved to tell me stories about learning to trap animals, to skin, to soak possum, and coon in brine, to fry up fresh rabbit. as bell hooks said. Baba was a woman of the outdoors, she boasted about being able to do anything a man could do and better. Bell hooks stated that, Baba could make anything grow. She was very knowledgeable about roots and herbs. Most of the time it is the father figure who has the outdoor knowledge, while the mother is going about the day doing errands and such.

The leading representation of role reversal was the differences in their feeling of religion. Daddy Guss belief in his religion was strong. Daddy Gus was a devout believer as the author said. He was a deacon – a person looked up to in church for his calmness. Baba had no other thoughts other than it was a hypocritical place. The author wrote, Baba had no use for church. She liked nothing better than to tell us all the ways it was one big hypocritical place: Why I can find God anywhere I want to I do not need a church. This was only displayed more when she died. Her funeral could not take place in a church. More times than not, the mother figure of a family are devout in religion wanting a good influence on the family.

The amount of role reversal in Baba and Daddy Guss relationship was a perfect equation. The extreme harshness of Baba coupled with Daddy Guss calm loving character was balanced ideally. This was shown many times in her essay, Inspired Eccentricity. When Baba was cussing and yelling, or inflicting harsh punishment, Daddy Gus was being calm and stillPuckett 3with open arms showing no signs of violence. I believe, had they not have been complete opposites in roles; their marriage would not have lasted for more than seventy years. Bell hooks wrote, After his death it was easier to see the ways that they complemented and completed each other. For suddenly, without him as a silent backdrop, Babas spirit was diminished. That truly supports the idea that, even with very contrasting personalities they still had a balanced relationship.

In consideration of the amount of role reversal for the author, it was supportive for her childhood. She wrote frequently about her difficult and painful childhood. She mentioned how the two different, but equally powerful figures, helped her through her troubled adolescence. Baba was always the one advocating harsh punishment, while Daddy Gus was there to help her with her pain and anxiety she felt. Baba influenced her with the individualistic attitude and feminism. While Daddy Gus was there with his affection showing what Baba could not.

The amount of role reversal shown was a little extreme for me, but it helped me to see how other personalities of people can have an influence on the way people live and think. Her grandmothers demeanor was really tough and loud, something I would not have pictured in a grandmother example. This idea involves my own experiences with my grandparents, where I only had my grandmother alive on both sides. They did not display the kind of attitude that Baba did. They were much more like Daddy Gus, quiet, calm, and affectionate.

In conclusion, the role reversal in, Inspired Eccentricity was shown in every aspect of Baba and Daddy Guss lives. Although they lived close, they created two separate worlds. In those separate worlds they perfectly completed and complimented each other, while sustaining the author in her difficult childhood. The essay displayed the influence from both of herPuckett 4grandparents by the character and tone she exhibited. She was enchanted and fascinated by her grandparents marriage, showing that they had an ever-lasting influence on her life. 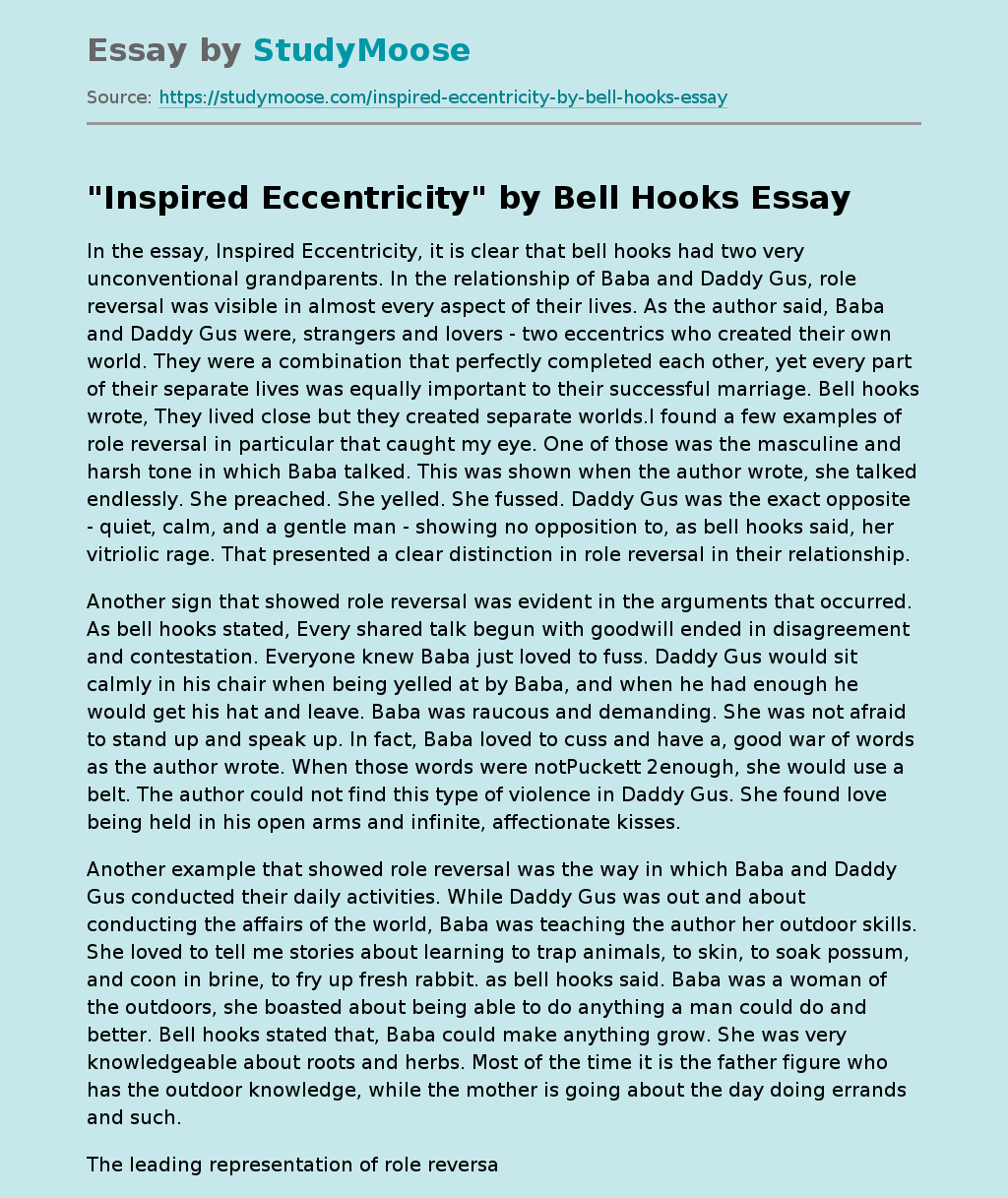