The inspector then gives the men the details all about Eva Smith and how she died and informs them that he wants some information. Straight away after the Inspector has finished Mr. Birling seems annoyed that his celebration has been interrupted for this girl and he says it has nothing to do with him and his family without hearing what else the inspector has to say. The inspector then explains patiently why he is there and what connection it has with Mr.

Don't use plagiarized sources. Get your custom essay on
“ The Inspector in ‘An Inspector Calls’ ”
Get custom paper
NEW! smart matching with writer

Birling and then he waits to see if Mr.Birling can remember the girl.

When Mr. Birling says he can only remember hearing the name and can’t really remember her the inspector gives him a little ‘push’ and says that Mr. Birling employed her at one stage. Mr. Birling then continues on and pulls out a photograph apparently of this girl and goes to show it to Birling. As he does this Eric and Gerald both rise to have a look at the photo but the inspector blocks the photo from their views and after Birling has seen it he places it back into his pocket.

When Eric and Gerald ask why he stopped them from looking at the photo the inspector says it’s the way he works, dealing with one person at a time. The way he shows the photo to Birling and not the others creates dramatic impact and makes the audience wonder. The inspector then mainly lets Mr. Birling speak only mainly asking questions when Mr.

Birling stops to get him ‘going’ again and to make him seem like a bad person. As he lets Mr. Birling speak he somehow manages to get Eric on his ‘side’ and Eric does a lot of questioning whereas Gerald supports Mr. Birling so he is dividing the family.

After Mr. Birling has said everything that he knows he realised that the Inspector somehow managed to get him to reveal everything and this annoys him and again he tries to get some power by saying, “I don’t see we need to tell the inspector anymore” so he says he has said enough so he feels in control. Sheila then enters after he has said and inquires about what is going on. Mr. Birling then tells his daughter to run along by saying, “Nothing to do with you Sheila. Run along” but the Inspector tells her to stay which is the point where everyone realises he isn’t there to only question Mr.Birling.

When Sheila has been informed about everything she like Eric also seems to be against her dad’s actions dividing the family more. The inspector then slyly hints that they were responsible and the family start arguing whilst the Inspector remains calm and watches the emotions of everyone come out without saying anything. Then the inspector tells a bit more about what the girl did with her life after she was fired. All along Sheila is defending the girl and the Inspector ‘fighting’ her father and his views.

The inspector then brings Sheila into the conversation without saying her name so no one but Sheila and the inspector realises that Sheila has something to do with the girl. The inspector then pulls out another photo asking Sheila to come over to him so he is pulling Sheila away from the comfort zone of her family and he shows her a photo of the girl Sheila knew. Again not showing everyone else so increasing the mystery around this girl and also the tension as everyone wonders whom she is. Sheila then gets upset and leaves the room and everyone realises Sheila has something to do with the girl.

The rest of the family then get annoyed at the inspector by saying, “Why the devil do you want to go upsetting the child like that” in an angry tone but the Inspector who remains calm and patient waiting for Sheila to return replies, “I didn’t do it. She’s upsetting herself”. Eric then says he is going to turn in but the inspector tells him to wait making him realise his turn for questioning to come making him wonder what he has to do with the girl. When Sheila returns the inspector then just sits back and watches Sheila tell her story and waits for all of the emotions come out.

After the inspector has heard everything he needs to know from Sheila he tells them more about the girl’s life after she left Milwards casually saying of her changing her name to Daisy Renton where Gerald shows that he knows that name connecting another person to the girl. The inspector uses the changing of names effectively to confuse the family. The inspector then just sits back and lets Sheila do some questioning and watches the reactions and emotions for a while. When Sheila finishes the inspector says, “well” to ask Gerald to come out with the information he knows.

The Inspector in 'An Inspector Calls'. (2020, Jun 02). Retrieved from https://studymoose.com/inspector-inspector-calls-7603-new-essay 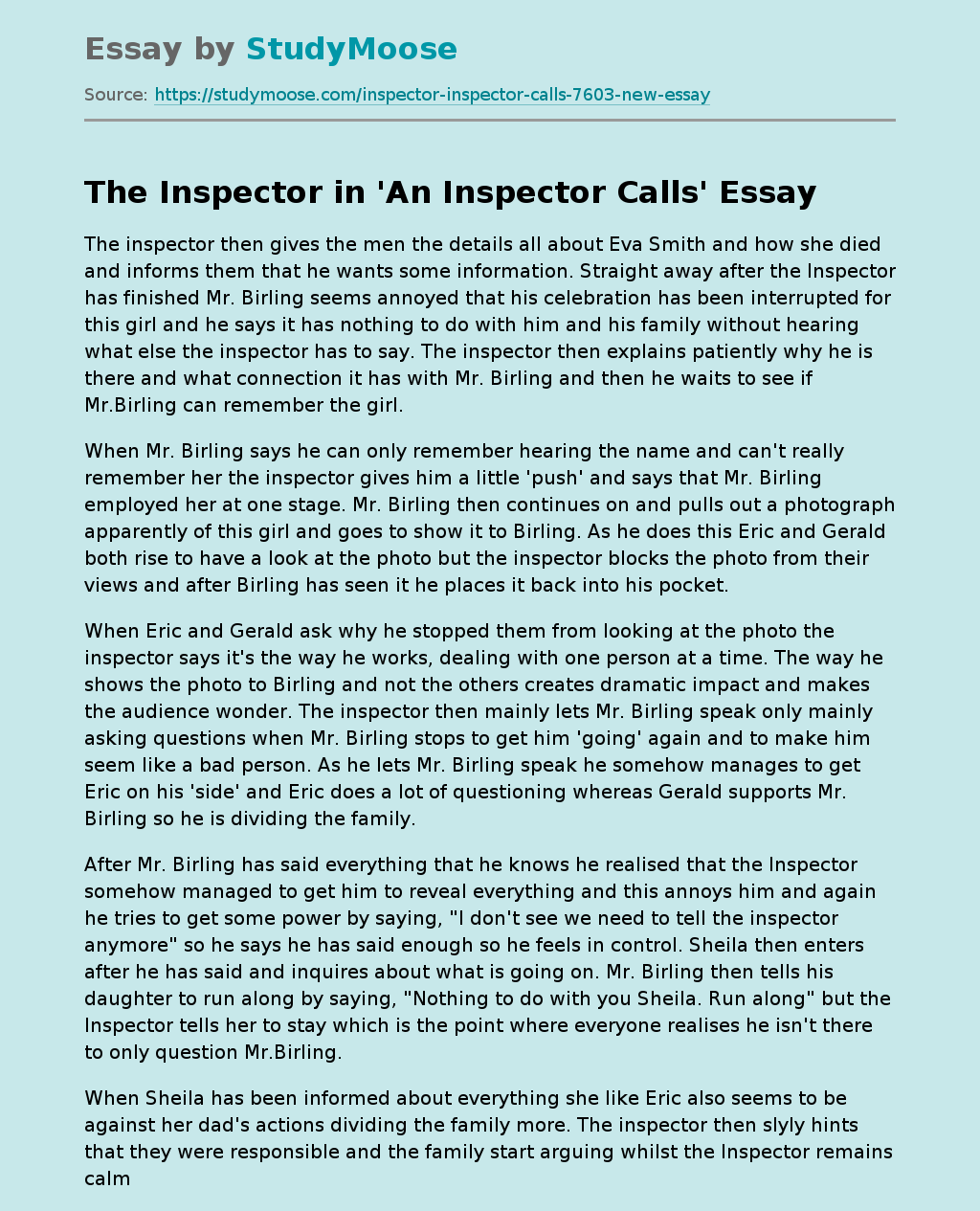