Minimum Core Data Set is defined as the minimum or least amount of data a surveillance system can collect on all injuries.

Don't use plagiarized sources. Get your custom essay on
“ Injury Surveillance in Medicine ”
Get custom paper
NEW! smart matching with writer

And the Minimum Optional Data Set is defined as data a surveillance system need not necessarily collect but may collect, if it is deemed useful and the system has the resources to collect and process it.The CDC and WHO document states that the minimum core data set consist of something to identify the person injured (identification number), aged of the injured person, sex of the injured person, intent (whether the injury was unintentional or resulted from violence or self harm), place where injury occurred, nature of the activity or event being undertaken when the injury happened (e.

g. Swimming, driving), mechanisms or cause (e.g. traffic injury, drowning), and the nature of the injury.

The CDC and WHO core minimum data set focus first on some demographic information such as the age and gender, then moves on classifying the injury as intentional or non intentional. Then they discuss the location place of injury where it occurred, how it happened (the nature of the activity or event), the way it happened (mechanism or cause), and finally focus on the injury itself (nature of the injury).

The Australian doesn’t classify or put an identification for the injured person, they rely on the narrative description of the injury event, whereas the WHO and CDC identify the injured person by an identification number. I think the WHO and CDC system is better, because it covers the core minimum data set and the core optional data set, whereas the Australian system covers only the core minimum data set. Usually, when collecting information on core minimum, they lead directly to the core optional, giving us more information in the end.

In the expanded demographic information, including years at school, ethnicity, martial status, employment status, household income, history of blood pressure, treatment of raised blood pressure, history of diabetes, and treatment of diabetes. Optional Modules for this step include, mental health, intentional and unintentional injury and violence and oral health, as well as the objective measure of physical activity behavior. The second step core items include weight and height measurement, waist circumference, and blood pressure. The expanded measurements include hip circumference, and heart rate. The optional modules for this step include the skin fold thickness, and assessment of physical fitness. The third step core items include fasting blood sugar and total cholesterol.

The expanded measurements include fasting HDL-cholesterol and triglycerides. The optional modules for this step include oral glucose tolerance test, urine examination, and salivary cotinine. The WHO STEPwise Approach to NCD Surveillance Country-Specific Standard report, Saudi Arabia 2005. The report is by the ministry of health, kingdom of Saudi Arabia in collaboration with the World Health Organization, EMRO. The report includes background, methodology, ethical approval, then moves to the specific sections starting with the demographic information, tobacco use, diet, physical activity; the medical history includes high blood pressure, diabetes, physical measures, hypertension, and biochemical measures.

The ministry of health yearly statistical reports includes sections on cases of malignant tumors registered in king Faisal specialist hospital and research center, Riyadh and Jeddah. Also, the cases of tumors among children referred to king Faisal specialist hospital in Riyadh and Jeddah. The survey of health information in the kingdom of Saudi Arabia is a result of a process of comprehensive reform of the health information systems and they stared and they started a cooperation project for a period of 5 years with the Institute for Health Metrics and Evaluation-University of Washington to implement an integrated system of health information in the kingdom. Their first step was the implementation of a population-based survey to track risk factors for chronic diseases in the kingdom.

The survey was designed to measure all relevant information in the context of social, economic and health- risk factors leading to injuries, illnesses and the resulting cascade of hospitalizations, outpatient visits, ad use of an adherence to interventions. Through the implementation of this survey, we were able to get more information about the health status, and risk factors for chronic diseases, as well as the ability of health services in the performance of their duties as we identified the social and economic factors that affect the health of the individual and society, as well as it has helped us survey also assessing disparities in the health interventions and chronic diseases in the kingdom. With the help of the information provided by this survey, the Ministry of Health will reach a better understanding of the health requirements in the kingdom and provide a sound basis for the development and implementation of prevention programs and treatment in all regions of the kingdomThe Saudi Heath Information Survey (SHIS) is a large national survey aiming at assessing chronic diseases, health behaviors and risk factors among adults Saudis aged 15 years and above in the kingdom of Saudi Arabia. They survey consists of a household roster, a questionnaire and physical measurements, and a lab based biomedical examination. The survey is done on specific topics and each topic has a report that will be disseminated in both English and Arabic languages. Examples of these reports is Smoking in the Kingdom of Saudi Arabia, Cholesterol at a glance, Hypertension at a glance, Adult Obesity at a glanceetc.

The above were the most known surveillance or screening mechanisms done in Saudi Arabia. Surveillance on non-communicable diseases in specific cities, regions, or organizations are done by researchers the information is available when they are published. The other most functioning and nationally is the cancer registry. The cancer registry was operating since the late 1900’s and since then yearly reports are available. Certain hospitals have specific surveillance registries on chronic diseases. For example Saudi Aramco Hospital has registered for chronic disease like hypertension, diabetes, as well as the risk factors for these chronic diseases, like pre diabetes registry. The Kingdom of Saudi Arabia is focusing on reducing the incidence and prevalence of non-communicable diseases; one of their efforts is through screening and surveillance systems. However, the kingdom faces many challenges, which include technical challenges to build the complete system, the lack of qualified and professional staff that is trained in using the system.

Also, Saudi suffer from competent epidemiologists and researchers who have enough experience for building and maintaining a national surveillance system capable of accurately collecting, analyzing and disseminating timely information to decision makers. Another major issue is the unclear definition and ambiguity of concepts related to the surveillance system in health care organization; As well as the inconsistency of terminology and coding. Finally, the lack of health policy and procedures that guide and direct this aspect has tremendous drawbacks for surveillance systems in the kingdom.

What are the advantages of Health Map over GPHIN? What are the shortcomings in both systems

These type of surveillance systems support raising awareness and providing early notification to suspected outbreaks. One of the advantages of these systems is that they provide information on areas that are usually overlooked by the global public health efforts. Even with the drawbacks they have, they usually have valuable information to initiate epidemiologic follow-up studies and provide context to traditional sources. The article on Health Map, already discussed that this potential is seen by WHO that base or trigger their reports based on the sources from these type of surveillance systems (GPHIN and Health Map). One of the other major benefits of these systems is the low cost, and flexibility of the information available to public and as a result raises awareness of disease outbreaks. These types of sources provide information for the areas that are under resourced.GPHIN scope covers humans, zoonotic, plant, marine, food, water, bioterrorism, natural disasters, product safety, and drugs.

The aim of creating Health Map was to develop an integrated global view of emerging infections based not only on traditional public health datasets but rather on all available information sources. The health map is a surveillance system that continually aggregates reports on new and ongoing infectious disease outbreaks. The system extracts, categorizes, filters, and integrate reports, to accelerate information and early detection. Health map relied on electronic media sources, the systems collects reports from 14 sources. Health Map has Internet search criteria, which include, the diseases names (scientific and common), symptoms, keywords, and phrases.

The Health Map system stages of characterization are identifying disease and location, determining relevance, and grouping similar reports and removing duplications. One advantage of health map is that it classifies the outbreak alert information. Another advantages is that it characterized based on relevance. It provides news or alerts of immediate interest to reduce the information overload. As a result only relevant and breaking news articles that were classified earlier will be available on their site.

One of the major advantages of Health map is that is addressed the computational challenges of integrating multiple sources of unstructured information. It also reduces false alarms by systematically aggregating and cross validating of information reported; then a activity score or heat index is calculated based on the reliability of source, the number of unique data sources. As a result, the reported information will have more weigh and confidence in the reliability of reporting because multiple sources are aggregated rather than once source. These systems have many drawbacks or shortcomings to them, in this situation GPHIN and Health Map. One of the major drawbacks to these systems is the false reports and reporting bias. Local news sources report on few cases that might not be available at national level, these sources has less reliability and lack confirmation. Intentional biases are also an issue; these biases may be due to political reasons, disinformation or censorships (false positives, false negatives).

Another challenges in using big data and social media sources, is the signal to noise ration which increases the false positives and false negatives. Also, some medias provide limited information, which may help to determine a reliable signal. Another issue these systems face is the representativeness of the reports generated, especially ones based on social media, as not everyone have access to social media or a smartphone. The information reports generated will be representing the population with access to social media and smart phones, resulting in selection bias. The last drawback these surveillance systems face is the ethical issues or considerations, because information obtained is included rights of individuals and privacy issues. 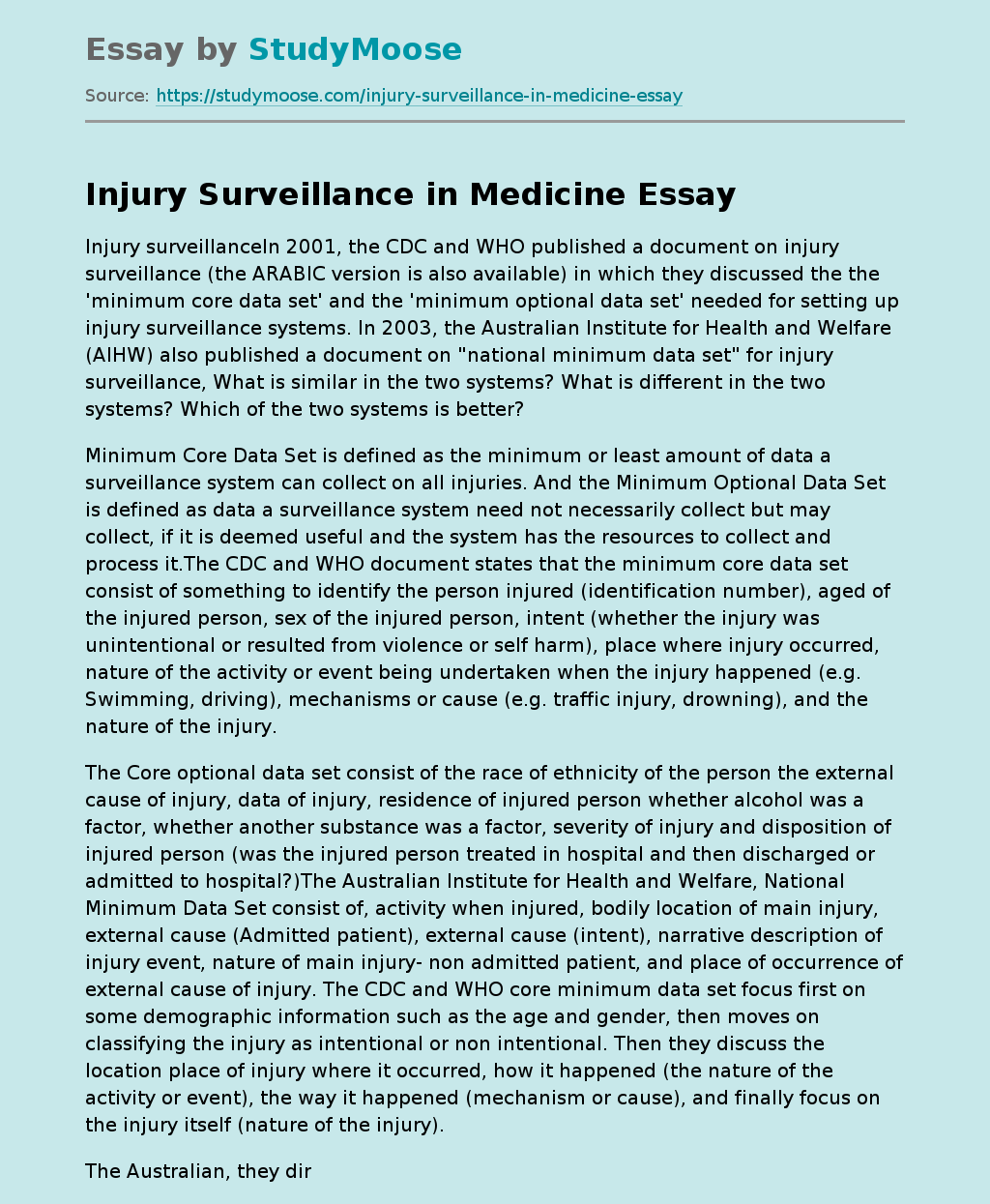