How many of you can still remember exactly where you was on 9/11? I remember I was in my 2nd grade classroom and hearing over the intercom that our teachers needed to turn on the T.V. As we began watching the horrific events that was taking place and yet to take place, we was all confused on what was happening, and why. We just knew what we was watching was not normal. The World Trade Center attacks were part of a strategic plan of a terrorist group al-Qaeda.

Don't use plagiarized sources. Get your custom essay on
“ Informative Speech on 9/11 Planes ”
Get custom paper
NEW! smart matching with writer

American Airlines Flight 11, which carried five Al-Qaeda terrorists, 81 passengers, and 11 crewmembers, was the first plane to hit the North Twin Tower. The flight was scheduled from Boston, Massachusetts to L.

A. California. Within fifteen minutes of that flight, the Al-Qaeda hijackers had injured three people, killed one, and forcibly made their way into the cockpit, and overtook the captain and first officer. Mohamed Atta was the hijacker that took over the planes control, and was in control of the events that followed. The air control system realized something was wrong when they lost all contact with American Airlines Flight 11, until Mohamed Atta, accidently sent a message to the air control system instead of the passengers in the plane.

United Airlines Flight 175 was the second passenger flight, which carried five hijackers and 60 people, which was boarded to go from Boston, Massachusetts, to Los Angeles, California. Within 30 minutes of take off, the hijackers had forcefully entered the cockpit and overruled the pilot and first officer, allowing Marwan al-Shehhi to control the airplane from then on. Unlike American Airlines Flight 11, Airlines Flight 175 kept their air traffic control system on, and it was visible on New York Center’s radar. Many of the passengers and also crew members made phones calls from the phones located on the plane. 17 minutes after the North Tower was hit by
American Airlines Flight 11, the United Airlines Flight 175 then struck the South Tower, which was the only impact from September 11, 2001 that was seen live on television as it occurred. 56 minutes after the impact on the South Tower, of the World Trade center, the building collapsed.

American Airlines Flight 77, which killed the five Al-Qaeda terrorists and 59 passengers boarded the plane, and also the 125 people that were in the building of the third attack, the Pentagon located in Washington, D.C. The flight was departing from Dulles, Virginia to the destination of Los Angeles, California. It took the five hijackers 35 minutes to intrude the cockpit; Hani Jonjour then took over as the pilot of American Airlines Flight 77. The western side of the Pentagon at 9:37 was hit. At 10:10 A.M. a section of the Pentagon had collapsed, it took days for firefighters to extinguish the massive fire.

Many of us was aware of the events that took place on 9/11, but really didn’t know much about the passengers that was boarded those four planes on September 11, 2001, a day that forever change America. On Flight 11, Charles “Chuck” Jones, 48, almost made it into outer space. He was qualified to fly on the space shuttle and was scheduled to fly a mission when the 1987 Challenger explosion indefinitely postponed launched. On Flight 77, Suzanna Calley, 42, of California, would have celebrated her 20th wedding anniversary on Wednesday, September 12th, and her 43rd birthday on
Monday, September 17. On Flight 175, Ruth McCourt, 45, and her daughter, Juliana, age 4, were aboard United Airline Flight 175. Ruth McCourt’s brother, Ronnie, escaped the ground floor of the World Trade Center. On Flight 93, Todd Beamer, 32, leaves a pregnant wife and two sons. His family believes that he died when he and other passengers tried recovering Flight 93 from the hijackers. The flights of 11, 77, 175, and 93 has forever change the life of America and on 9/11, there will always be a moment of silence for the people that bravely lost their lives that day. 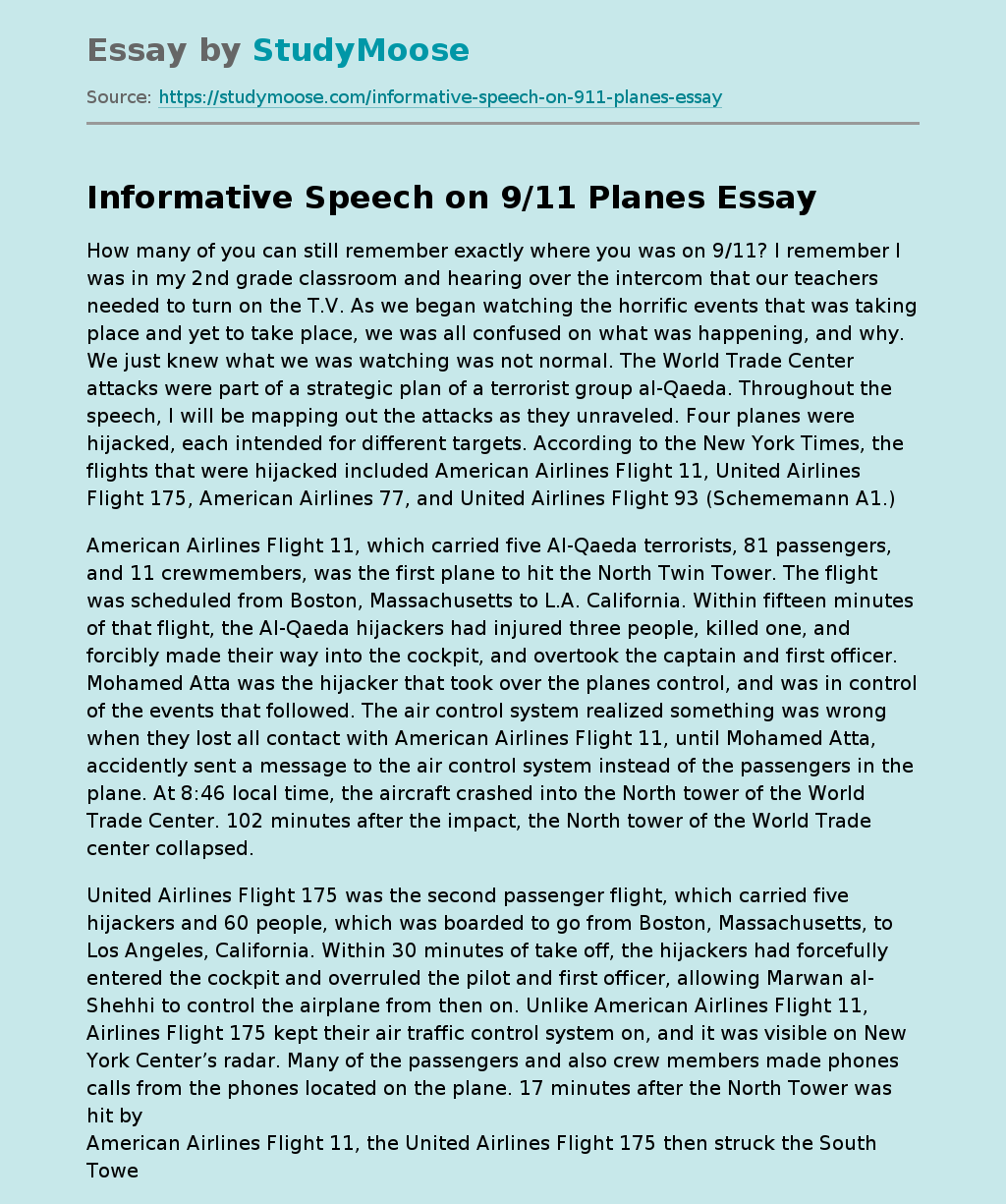