Informative on Tattoos and Health Risks

Sitting there while my hand was being held by my mom I thought to myself, “how in the world are my fingers still attached to my palm?” then I realized my mom was probably going through more pain than I was considering she was getting her second tattoo on the top of her foot. I have done some research on the different aspects of tattoos. Tattoos can be viewed in two ways: positively and negatively. Today, I’d like to explain how there are more to tattoos than just looks and how they are becoming more acceptable along with the health issues and social constructs.

Don't use plagiarized sources. Get your custom essay on
“ Informative on Tattoos and Health Risks ”
Get custom paper
NEW! smart matching with writer

First, tattoos are not always just about looks; sometimes they have meaning and stories behind the design.

For instance, in October 2010 the article “Looking at the World’s Tattoos” by Abigail Tucker, declares when a Cambodian monk has dark scrawls on his chest then that reflects his religious beliefs.

Furthermore, in January 2012 Michael Firmin claims in the article “External Dynamics Influencing Tattooing Among College Students,” that since tattoos can represent a story, students who have tattoos are going to be less likely to have depression. Fredrick and Bradley, professors from Armstrong University, had 53 students complete a survey discussing body tattoos along with taking a depression test.

The students who had tattoos had significantly lower scores on the depression test.

Not only can tattoos have significance, they can also be seen as beneficial in other aspects as well. Tattoos are becoming more popular therefore more acceptable. A. In the article, “Tattoos in the Workplace” by Tess Vigeland on October 19, 2012 explains that 40 percent of eighteen and nineteen year olds have at least one tattoo. 1. There was a study conducted on careerbuilder.com that discovered having piercings besides ears was the number one problem in trying to receive a job, and runner up was bad breath, then last was tattoos. B. Further, in her 2009 book, Tattoos in Modern Society, tattoo expert Janey Levy describes how modern tattoos have a better reputation. 1. Along with that, anchors, angels, butterflies are common symbols and are considered to be art forms. 2. Since tattooing has become a harder field to get in to, tattoo artists go to art school to improve their skills. Transition: Although tattoos are becoming more popular, there are still negative sides to them.

Tattoos can potentially cause health risks

Jill Margo asserts in “Science Unveils Sinister Side to Skin-art Craze” on October 2, 2013 that tattoos contain carcinogens, cancer-producing particles, which are being injected into skin. On the other hand, the particles injected are stable however when tattoo removal occurs then those particles are becoming unstable and can get into one’s blood stream. Margo also leaves us with the fact that black ink contains chemicals, which are also found in soot, tar, and cigarette smoke. Along with that, skin cancer does not arise because the ink is injected deep in to the skin or better known as the dermis and skin cancer usually occurs in the epidermis.

Health is at risk when it comes to tattooing, along with the way they can be viewed. Tattoos are often associated with the previous stigmas put on them. To support this idea Michael Firmin emphasizes how nearly in every culture tattoos are or have been associated with criminals, gangs, or people in the military. Whereas, more recently in the United States tattoos sometimes indicate risk-taking behaviors such as drugs and alcohol or violence.

Then, in the article “Disappearing Ink” on October 13, 2007, Corinna Wu points to the fact that tattoos are classified as cosmetics and need approval from the Food and Drug Administration. However, since there have not been any widespread concerns about tattoo safety the FDA has not approved and will not step in unless it is necessary which is a big concern for some people.

As you can see, there are a few ways to look at tattoos whether it being positive or negative. Some points to be considered are the meanings behind tattoos and how they are becoming more socially acceptable, as well as health risks and the stigmas tattoos have.

Informative on Tattoos and Health Risks. (2016, May 04). Retrieved from https://studymoose.com/informative-on-tattoos-and-health-risks-essay 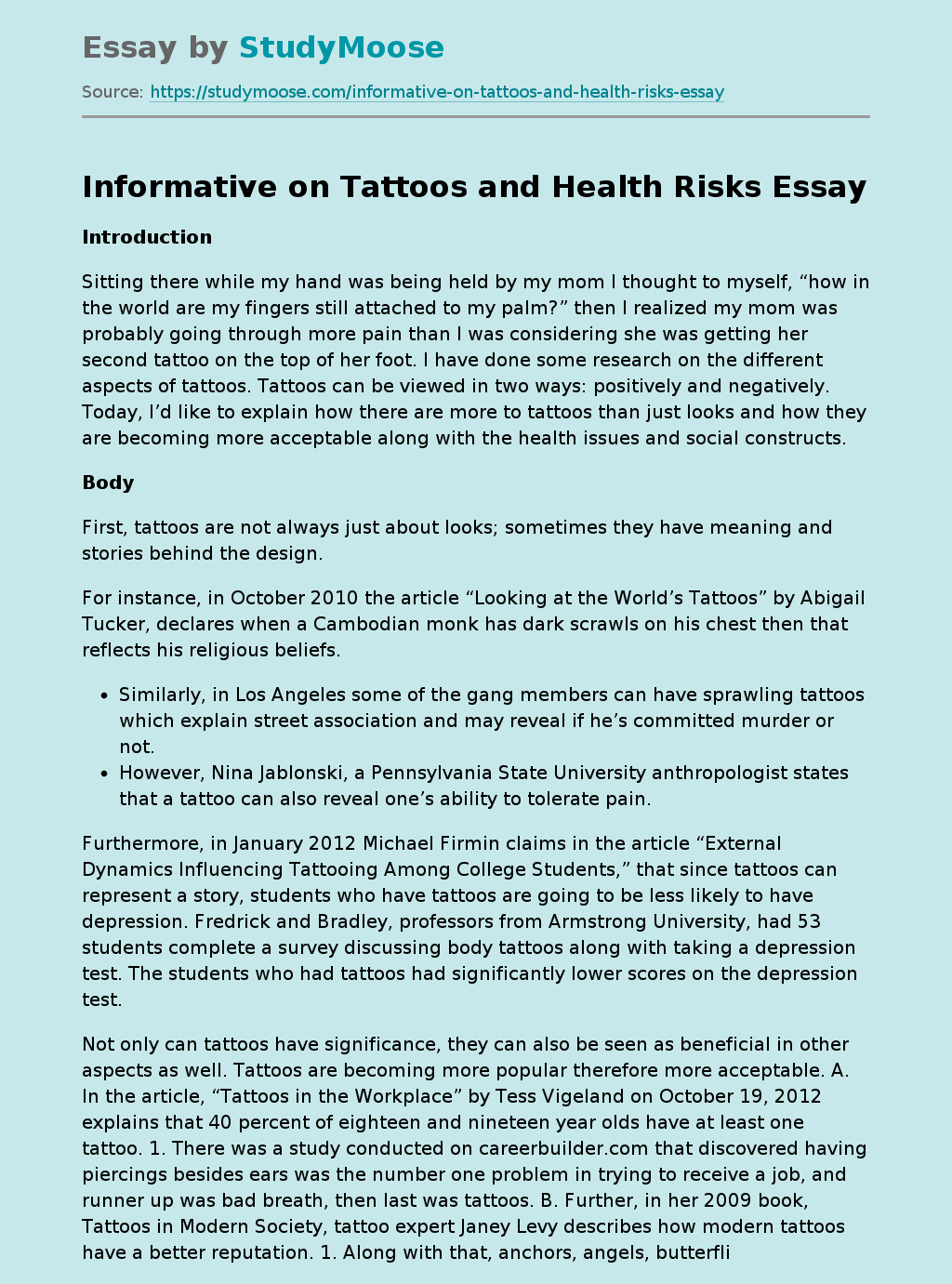