Western culture is neither homogeneous nor unchanging. As with all other cultures it has evolved and gradually changed over time. All generalities about it have their exceptions at some time and place. Globalism has spread western ideas so widely that almost all modern countries or cultures are to some extent influenced by aspects of western culture which they have absorbed. In the later 20th to early 21st century, with the advent of increasing globalism, it has become more difficult to determine which individuals fit into which category.

Don't use plagiarized sources. Get your custom essay on
“ Influencs of Western Culture on Indian Youth ”
Get custom paper
NEW! smart matching with writer

How there is head and tail for a coin, there is both positive and negative impact of western culture on the world and especially on todays young generation , On one side we enjoy our so-called rich culture and really admire it. The ways of living has been greatly enhanced by the western culture which is good for success and growth of a country and helpful for it in heading towards super success. But on the other side; this culture mainly adopted by us has given rise to Individualization.

Individualization has broken up many cultural systems, paving way for the youth to fall prey to drug addictionand many other ill practices. This stage is the most vulnerable period of life where the youth need guidance, counseling, education and care by parents. Culture” and “Tradition” are more significant in a country like India which has always been cherishing its rich culture and heritage and it’s quite well known for it worldwide. But these things are now just on paper and are slowly losing their sheen.

Why? The younger generation are the representatives of India in a true sense of the word.

We are the sole cherishers of India’s pride and its heritage which actually lies in its culture, its diversity, its uniqueness. In such a scenario, where the point of a rich cultured country like India is facing the problem of losing its culture, are we, the youth; the Indian youth not Actually Responsible For This? Are we not putting our own self image, our self respect, our mother India’s pride at stake by doing so? Just think about it my dear friends. I would suggest, There is no problem as such when we follow the western culture to some extent.

The problem is we are forgetting our culture to a greater extent. Why should we do so? as 21st century youth doesn’t mean forgetting the motherland and following or in short adopting western lifestyle in totality. Every culture has its own pros and cons. We individuals should be strong enough to take the good and throw off the bad. We are easily influenced by western culture. Right from our clothing, till the music, the films, our attitude, our lifestyle, in short every aspect of our life has totally changed. I just want to say that “Change doesn’t happen on its own; it’s we who bring about the change. But by this change, our mother India has lost its sheen and beauty; its place; its uniqueness in the world. The things mentioned above does not only imply to India. There are many countries in the world where todays youths have adopted westernization.

For eg in many countries like Japan , Bangladesh , etc are greatly prone to westernization. At the end I would just like to convey a message that- Almost all the countries in the world have become independent and we the younger generation are the representatives of the future . o we must realize that true beauty of a country lies in its culture, its heritage and every country has its uniquiness. So we must understand thae our country must be our own. And as for india many great western people like Mark Twain have said- India is the cradle of human race, the birth place of human speech, the mother of history, the grandmother of legend and greatgrandmother of tradition. Our most valuable and instructive materials in the history of man are treasure up in India only. 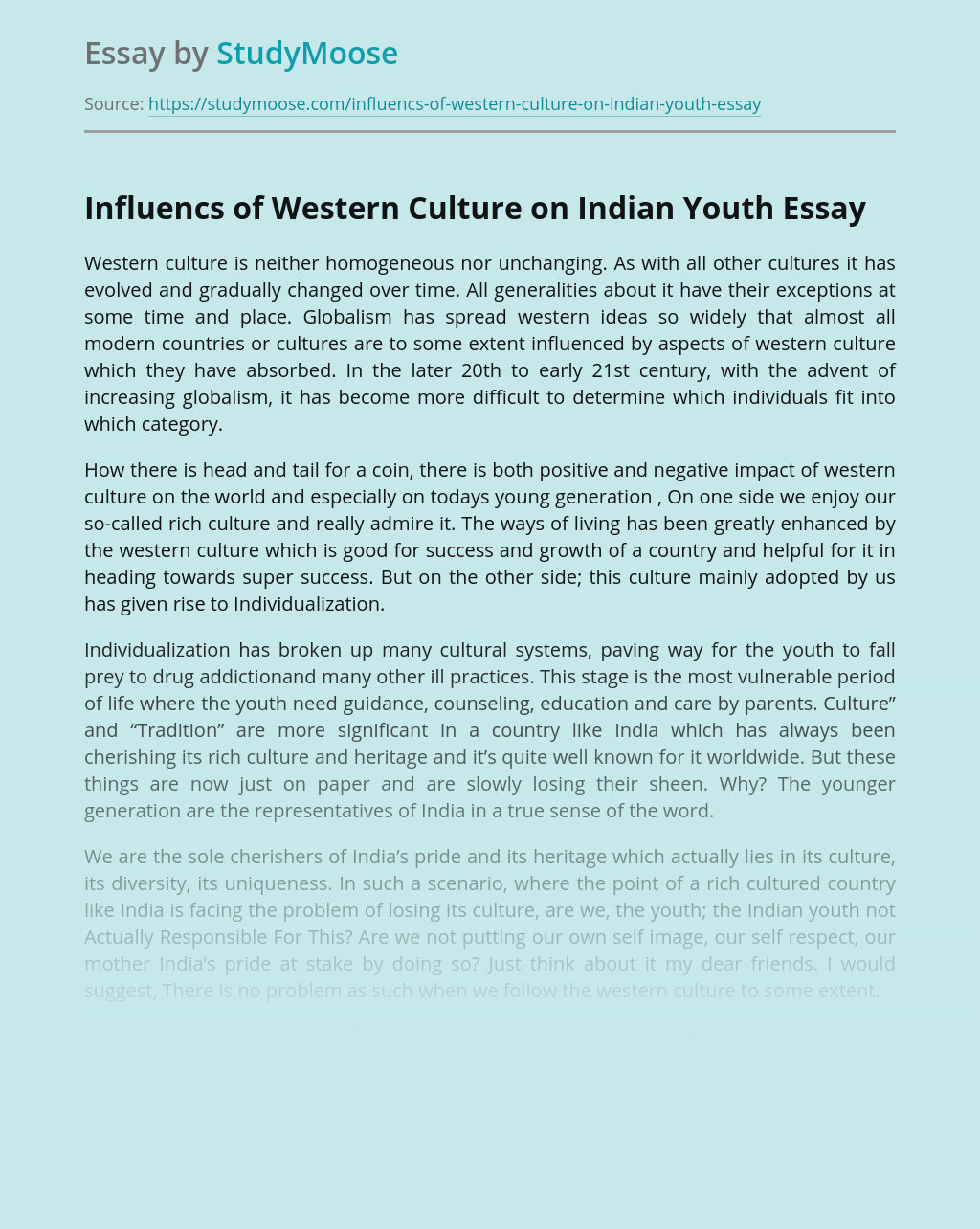