Is the influence of religion in western society declining?

Is the influence of religion in western society declining? Can we reasonably measure its decline? If it is declining, what is replacing it?

Don't use plagiarized sources. Get your custom essay on
“ Is the influence of religion in western society declining? ”
Get custom paper
NEW! smart matching with writer

There are two main ways in which religion is defined. Substantive definitions define a religious belief system as involving relations between the natural and the supernatural ideas defining religion in terms of structure and content of people’s beliefs not what religion does for them. The other way it is defined is as a functional definition, which defines religion in terms of the function it performs for society.

Many sociologists have tried to define secularisation, Bryan Wilson (1966), describes secularisation as, the process whereby religious thinking, practices and institutions is becoming less prominent in society and its institutions less important and influential in the lives of individuals.

Wilson (1966) stated that those who defined religion in substantive terms are more likely to support the secularisation thesis because they can show that religious beliefs has declined as people accept other more rational explanations of the world.

There is a number of people who believe, pray or meditate

Australia, as a nation and system of government, is a secular country although, like many Western countries, it holds basic Judeo-Christian values. The strongest evidence for secularisation comes from church attendance statistics. According to the 1851 British census approximately 40% of the population attended church. By 1950 this had dropped to 20% and was less than 7.5% in 2000. Sunday school attendance had also dropped considerably from 55% in 1900 to just 4% in 2000 despite the fact that the population had grown considerably.

An anti-secularisation viewpoint sees religious participation in the past as being largely overestimated. Martin (1967), questions the reliability and validity of religious statistics. He views the demographic content as being not valid and questions the accuracy in the method of collections. He believes peoples religious belief cannot be measured from statistics about religious practice. People may be religious; however choose to express their belief in different methods. This viewpoint is shared with Demaroth and Hammond (1969), we should avoid the quick assumption that Church members are always highly religious in their personal beliefs and activities, or that Church non-members are otherwise non-religious. Martin (1967) argued that some people attended Church for social motive, rather than holding strong religious belief. This resulted in church attendance numbers being inflated, this questions whether or not it is valid to interpret declining attendances as evidence of a gradually loss of religious faith in society.

On the contrary Voas (2005) gives evidence for a significant rise in church attendance around Christmas time, which can rise by 330% in some diocese in Anglican Britain. Perhaps this suggests that Anglicans choose to go to church only at special religious occasions. Many sociologists looking at secularisation focus on Britain and do not take into account other countries that have taken a huge rise of fundamentalism such as the USA and Iran, which are closely linked too politics. Fundamentalists, such as the Christian Coalition, helped shape the policies of the Reagan and Bush administrations, Bruce (1995). Finally Stark and Bainbridge (1990) suggest that secularisation and strong religious belief alternate in a cyclical pattern.

As a whole in society today religion plays a less political role but religion is still a major provider of education and welfare for the poor. National debates about issues such as the age on homosexual consent, the family and abortions are given a moral dimension by the contributions of religious leaders. But despite exceedingly low church membership and attendance levels, surveys show that there seems to be a survival of some religious beliefs (1998 British Social Attitudes Survey). According to the 1998 British Social Attitudes Survey, 21% of those questioned agreed to the statement ‘I know God exists and I have no doubt about it’ whereas only 10% said that they did not believe in God at all; however there may be a moral connection attached with such a survey such that people feel more inclined to say yes whether they do believe in god or not.

According to Hamilton (2001), decline in religious practices may be more part of a decline in organisational membership and increased privatisation. Hamilton’s argument points out that less people join trade unions or political parties; this doesn’t mean that they don’t believe, but are alternatively more committed to family or individual priorities. Hamilton (2001) also points out that fewer people are church members, possibly due to this same occurrence.

Critics of the secularisation thesis point to the growth of new churches and the fact that ethnic-minority churches have pretty much held their own (Hamilton 2001). However, it is clear that the big organisations such as the Church of England and the Catholic Church have declined, whereas those that have stayed stable or grown are the smaller ones. Hamilton (2001) notes that church-goers are considerably older that non-churchgoers.

Bruce (1995) states the size of the clergy is a useful indicator of the social power and popularity of religion. In 1900, there were over 45,000 clerics in Britain, this had declined to just over 34,000 in the year 2000, despite the fact that the population had almost doubled (Bruce 1995). Another indicator is the rising divorce rate, and fewer religious marriages; 30 years ago church weddings used to make up 75% of all marriages now this figure has fallen to less than half (Bruce 1995). This when put together with the rising divorce and cohabitation rates and the proportion of children born outside marriage; is a large indicator that religion and its moral value system exert little influence today (Bruce 1995).

It may seem in western industrialised countries that religious beliefs have declined but if you take a global approach, then religion is still an overwhelming and dominant force. Whilst established religion may appear to decline in western countries like Britain, the growth of our immigrant populations is causing an increase in religiosity. Hervieu Leger (1993) suggests that what securalists see as religious decline is merely the reorganisation of religion so that it better suits the needs of modern societies. People in today’s society are been offered an increasingly) varied choice of what is acceptable to serve god. Religion is still a strong influence in most people’s daily lives but some of us need to accept the way it has altered to adapt the people wishing to access it, and alter there way of viewing religion to coincide with this change.

Is the influence of religion in western society declining?. (2020, Jun 02). Retrieved from https://studymoose.com/influence-religion-western-society-declining-new-essay 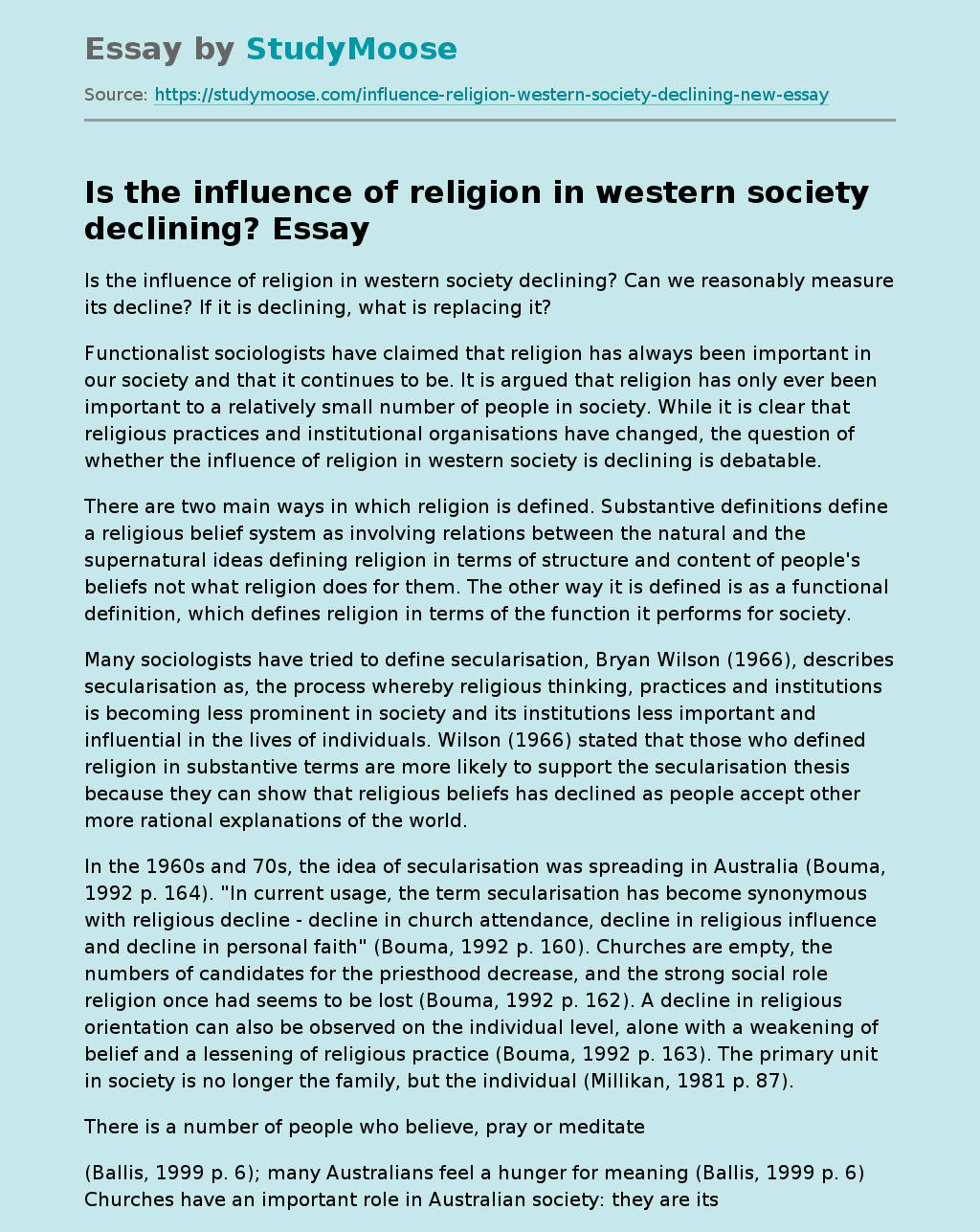