Throughout the play, although Lady Macbeth did not take any direct part of the deaths that occurred, she was the main influence until Macbeth lost control of himself. Prior to the murder of Duncan, Macbeth was reluctant in commiting any horrible indeeds. However, under the persuasion of Lady Macbeth, it began a chain of bloodshed. This led to an immense amount of guilt built within Lady Macbeth. She began thinking of Duncan’s murder more and more often and even warned Duncan that the guilt that they feel will eventually make them mad one day.

Don't use plagiarized sources. Get your custom essay on
“ Influence of guilt on Lady Macbeth`s behavior ”
Get custom paper
NEW! smart matching with writer

Not long after, Lady Macbeth started experiencing sleepwalking almost every night and in the end committed suicide.

In the beginning, Macbeth still felt loyal to Duncan and refused to cave into Lady Macbeth’s plan to become the king and queen of Cawdor. Macbeth says, “[w]ho should against his murderer shut the door / Not bear the knife myself” (Act 1, Scene 7, 15-16). Upon hearing Macbeth’s unwillingness to follow as she says, Lady Macbeth decided to challenge Macbeth’s masculinity.

Lady Macbeth does this by telling Macbeth, “[w]hen you durst do it, then you were a man” (Act 1, Scene 7, 49). Basically, Lady Macbeth is saying that if Macbeth does not kill Duncan, then he is a coward and not worthy to be called a man. When any man is looked down upon by a woman, they are bound to take action. Macbeth is no different. He decided to make up his mind and commit sin the night that Duncan is over.

Lady Macbeth might have not used the dagger but she framed the attendants which makes her part of the evil deed. “If he do bleed / I’ll gild the faces of the grooms withal / For it must seem their guilt” (Act 2, Scene 2, 54-56). Regardless of whether or not Lady Macbeth physically got blood on her or not, she had a direct hand in the murder.

After the incident occurred, Lady Macbeth told Macbeth to not feel guilty. She tells Macbeth “[t]hese deeds must not be thought / After these ways; so, it will make us mad” (Act 2, Scene 2, 33-34). If they try to be free of shame, no one will ever find out that they were the murderers. Everytime Macbeth started acting strangely, Lady Macbeth would get upset at him for not enjoying his title as the Thane of Cawdor. She wants Macbeth to completely forget about everything that they did so no one will ever suspect them.

As the play progresses, Lady Macbeth quickly contradicts herself. She started thinking of the sin more than Macbeth. It started consuming her more and more. In one of the scenes, Lady Macbeth is seen sleepwalking and murmuring quietly. According to the gentlewoman and doctor, they witnessed her saying “[h]ere’s the smell of the blood still. All the perfumes of Arabia will not sweeten this little hand.” Lady Macbeth has hallucinations of Duncan’s blood on her hands that she cannot get rid of. No amount of good deeds or hand washing will clean her of her dirty deeds. Towards the end of the play, we can see that Lady Macbeth has completely lost it and decided to take her own life. She could not bear the guilt and shame any longer. 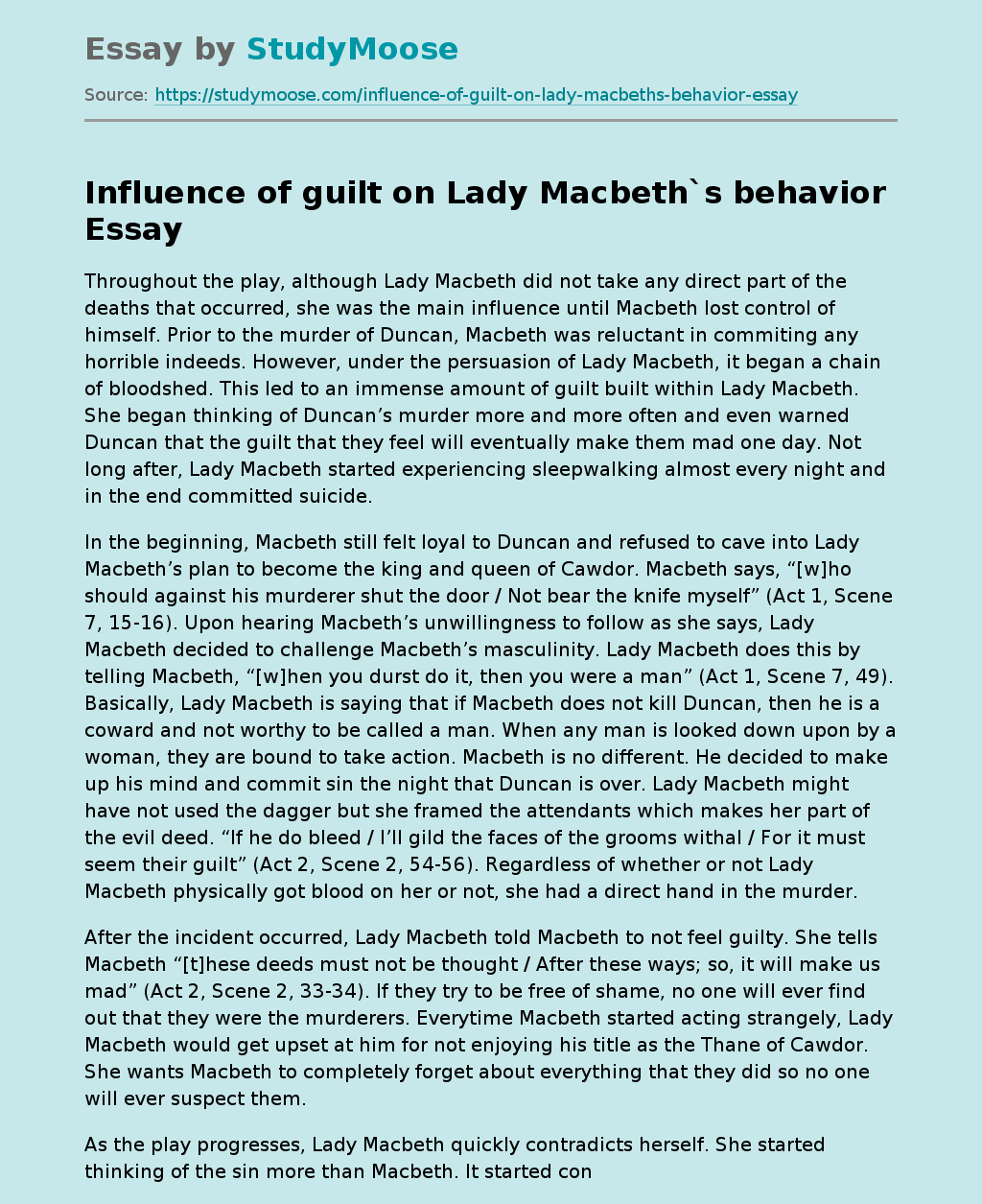