Influence of Greek Mythology on Juice by Stephen Davis

Greek Mythology is a great influence on today’s modern stories as they act as a strong stimulus for the roles, relationships, situations, symbols and purpose involved in the the play or story written. An example of this is the play ‘Juice’ by Stephen Davis, as it has strong symbolic connections with the Ancient Greek myth of ‘Daedalus and Icarus’. In this essay these two stories will be compared and analysed to prove that they both share the same moral theme of flying to close to the sun.

Turn in your highest-quality paper
Get a qualified writer to help you with
“ Influence of Greek Mythology on Juice by Stephen Davis ”
Get high-quality paper
NEW! AI matching with writers

The two stories that are being compared in this essay have very similar situations, relationships, attitudes, status and purpose as they both discuss certain experiences of a teenage boy and his ability not to listen to his father. In the play ‘Juice’ the relationship between father and son is untrustworthy and sometimes daunting as Rodney experiences a few occasions where his father angers him to the point he feels he has to rebel against his fathers guidance.

For example, when Rodney wishes to go to a party to celebrate the end of year 10 but his father refuses to let him go because there was no adult supervising the party. This resulted in Rodney sneaking out without his parents knowledge and going to the party despite his fathers stress on adult supervision. The same circumstances are also shown in the myth ‘Daedalus and Icarus’ although Daedalus and Icarus seem to have a stronger father-son relationship then Rodney and his father, Craig, in the play.

Icarus is prepared to leave his palace to run away with his father showing that he treasures his fathers company and feels protected in his care. Although, Icarus flaw is his failure to listen to his father when he warns Icarus not to fly to close to the sun. This is a literal warning to his son as he has given him wings to fly across the ocean but the wax that holds the wings firmly in place is easily melted. Thus the reason not to fly to close to the sun. But like Rodney in ‘Juice’ Icarus disobeys his fathers guidance so that he gets the chance to experience true freedom himself.

The result of Icarus’ and Rodneys decision is unfortunately fatal. Leaving behind their families to grieve for them and the opportunity to live a completely fulfilled life; all because of there self-willed decision to ignore their parents advice. There are some very similar symbols represented in both these stories that help to connect them strongly together and also assistant in delivering their message. Both Icarus and Rodney have the desire for a material object, this desire for something is symbolic as they are both taking risks with these symbolic objects.

Rodney cherishes the use of alcohol so that he feels released and free and Icarus cherishes the gift of wings as he is able to fly and experience freedom. The play has been designed to strongly connect with the myth and this has been achieved by also the naming of Rodney’s bird, Icarus. This is strongly symbolic as Icarus in the myth has wings and is able to fly. So he is represented in this play as the bird which later dies like Rodney. Another symbolic issue involved in these two stories is the motive to escape.

Both Rodney and Icarus are attempting to escape from their current situations. Rodney sneaks out his window to go to a party as he wants to get out of the house and experience independence and freedom whereas Icarus flys from his window to escape soldiers who are after his father and himself. Both of these decisions to leave their comfort zone were they are guaranteed to be safe result in their death. Their death is also very symbolically connected as they both die trying to fly. Rodney stands tall on top of a water tower, holding his dead canary in his hands, he wants to fly like the bird.

He wants to fly like Icarus. But he has flown to close to the sun, he has taken too may risks and is now falling to his death as Icarus did in the myth. He flew to close to the sun and melted his wax resulting in him also fatally falling to his death. Year tens are at a very substantial point in their lives where they are exploring new life experiences, what they are capable of and how far these experiences can be taken. It is a very experimental stage of an individuals life as they are introduced to risky and dangerous opportunities.

These are either rewarded with good times or unfortunately consequential for those involved. Both the play ‘Juice and the myth ‘Daedalus and Icarus’ discussed in the essay have shown their audiences examples of this. The play ‘Juice’ would be a good play for year ten students as they could relate strongly to the circumstances the characters face. Many teenagers share the same interests, desires and attitude towards trying new things like alcohol and partying; like the teenagers in ‘Juice’.

The consequences of trying these risky experiences is strongly depicted in the play and this helps to portray the message across to the audience of how abusing your freedom and acting irresponsible and rebelliously can be substantially dangerous to an individuals life. The myth ‘Daedalus and Icarus’ would also be a good myth to share with year ten students as it also portrays a similar message. Despite the fact that the myth has a contrasting time and place, it does share certain attributes that help year 10 students to realise the moral theme themselves. As Icarus forms the idea of an average teenager who unmistakeably doesn’t listen to his Father’s advice and abuses his freedom to fly, resulting in his pre-mature death.

This delivers a strong message to the audience that not only will be taken to heart but will also help them think about there own situations involving their parents and if they abuse their freedom too much. In conclusion, these to stories ‘Juice’ and ‘Daedalus and Icarus’ have successfully been compared analysed and proved to share the same moral them of flying to close to the sun; being irresponsible and abusing freedom to the point where the consequences can not be aided or prevented.

Influence of Greek Mythology on Juice by Stephen Davis. (2016, Sep 08). Retrieved from http://studymoose.com/influence-of-greek-mythology-on-juice-by-stephen-davis-essay 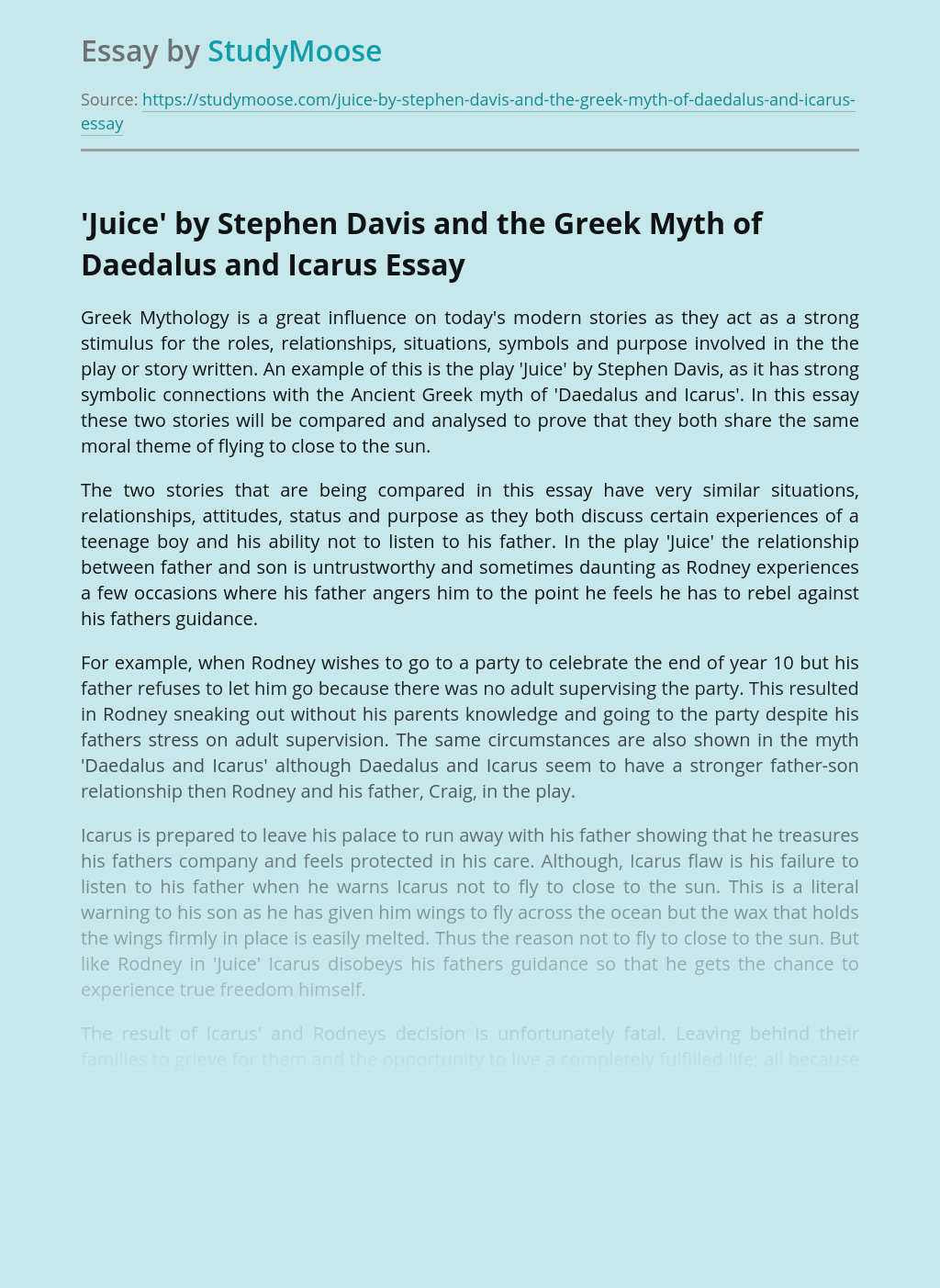 Turn in your highest-quality paper
Get a qualified writer to help you with
“ Influence of Greek Mythology on Juice by Stephen Davis ”
Get high-quality paper
Helping students since 2015
Stay Safe, Stay Original