Industrialization in History of Japan and Russia

As Western Europe began to industrialize, booming with innovation and new technology, the likes of which the eastern peoples of Asia have never seen, it became quite evident that they would either conform in this western practice of industrialization willingly, or become consumed by it. This apprehension gave a rebirth to two nations who would soon find themselves as major players on the global stage; Russia and Japan. Yet how these countries would industrialize, however, would take very different paths and diverse methods.

Don't use plagiarized sources. Get your custom essay on
“ Industrialization in History of Japan and Russia ”
Get custom paper
NEW! smart matching with writer

Japan is a country of small land mass and for that reason is obviously more united and closely knit. Russia, however, is massive in size which would indubitably withhold many different types of peoples, dialects, and so fourth. Essentially, Japan would industrialize independently through a militaristic view and the Russians through a type of social revolution with the help of Westerners.

In a Russian point of view, they saw (the nobles) western industrialization as a threat to their hold over the country.

On the other hand, Peter the Great pushed for Russia to become more European by adopting their language (most notably was French), clothing, administrative and military methods. Moreover, Peter the Great would also have the Russian royal family unite with European royal families through marriage and inconsequence, expand Russian territory. Peter the Greats fascination with Europe happened in his early years as Tsar, when he wished to wage war with the Ottoman Empire and wished to be supported by European monarchs. His grand embassy was unable to find any support from European nations, however during his travels Peter learned much from the Dutch, Germans, French and English.

Evidently this contributed in a large way to Peter’s ambition to industrialize and Westernize Russia.

Nevertheless, this was only skin deep as it was only members of the nobility who experienced this Westernization and not those of the peasant population. After Peter’s death, Catherine the Great continued with his policy of Westernization, known as Russian Enlightenment. This was the dawn of Russia’s first university, library, theatre, public museum and press. Over the next few years, Russia was involved in the Crimean war pitting her against many great powers of Europe and was a major loss, leaving the empire with much discontent. As Alexander II came into power in 1855 there was restlessness within the empire. Rather than facing a revolution, Tsar Alexander II decided to emancipate the serfs himself in 1861. This resulted in the freedom for two hundred million people. Inevitably, there were still issues as the serfs were still a poor and illiterate people, and even paying taxes to their old masters.

Thus, the Social Democratic Party wad formed with the aim of overthrowing the Tsar through revolution by the working class to put an end to capitalism and abolish class exploitation, as per Karl Marx. The party split into two factions, the Bolsheviks led by Lenin and the Mensheviks. Despite their differences, both factions were able to come up with a party platform in 1903 which included equal rights for all citizens regardless of race, religion or nationality, as well as freedom of religion. At the end of it all during the revolution in 1905, the Duma was instituted in favour of the liberals. And at this same time Russia was trying to expand which made the Japanese worry, and war broke out soon after in the same year, with the latter being victorious. This crushing and demoralizing defeat led to many strikes and protests within Russia bringing freedom to peasants yet workers rights still being introverted which would eventually give rise to a communist revolution in the near future, known as Red October.

Now with regards towards Japan, they lived under the Tokugawa Shogunate for two hundred and fifty years, all of which were peaceful. They had a very strict class hierarchy with peasantry being eighty percent of the population and the other twenty percent divided almost equally amoungst the samurai, merchants and craftsmen.

Unlike the Russians, the Japanese resisted Western methods and customs. Japan became an isolationist country and very secluded. Things would have stayed this way if Commodore Matthew Perry and his American fleet of four ships did not steam into Edo Bay and display the destructive power of their modern guns. With that simple demonstration of the power of industrialization, America was able to negotiate rights to trade and use Japanese ports, which is remarkable considering it took only a year to break down the barriers of a two hundred and fifty year old secluded nation. The Tokugawa Shogunate soon collapsed thereafter, giving way to the Meiji Restoration.

The motto “Enrich the Nation, Strengthen the Army” was soon adopted by a small group of aristocratic reformers. They abolished the shogunate, stripped the samurai of their privileges and started to modernize the economy. Many new inventions and innovations were introduced to Japanese culture and life, such as railroads, steamships, factories, the telegraph, and even baseball. Yet the ultimate goal was to build a strong army and navy to keep Westerners at bay and make Japan a superpower within Asia. To do so, Yamagata Aritomo, a statesman who influenced economic policy, education, and the writing of Japan’s constitution, was sent to Europe on an eighteen month trip to observe military practice.

One year later after his return in 1873, Aritomo framed the imperial decree that established Japan’s conscript army. The main observation he made was learned from the Belgians and Dutch. Through their reserves, they were able to defend their small country despite being situated between much larger and powerful nations. All the while they were able to attend to other state issues. In essence, they were able to make militaristic needs one of their main priorities, but at the same time were able to attend to other issues on the countries agenda. Undoubtedly, this brought Japan to become a major power in the new, modernizing world. This was confirmed with military victories against China in 1895 and Russia in 1905.

In the end, Russia and Japan both become industrialized and powerful nations. With some differences that Russia reached out to build links and bridges with Western Europe and Japan was isolationist, and that Russia needed help from the West to industrialize and Japan did it on their own. But they were similar in that both are feudal societies without a middle class, with autocratic governments and both decided to industrial for fear of European commerce and imperialism.

Industrialization in History of Japan and Russia. (2016, Jul 30). Retrieved from https://studymoose.com/industrialization-in-history-of-japan-and-russia-essay 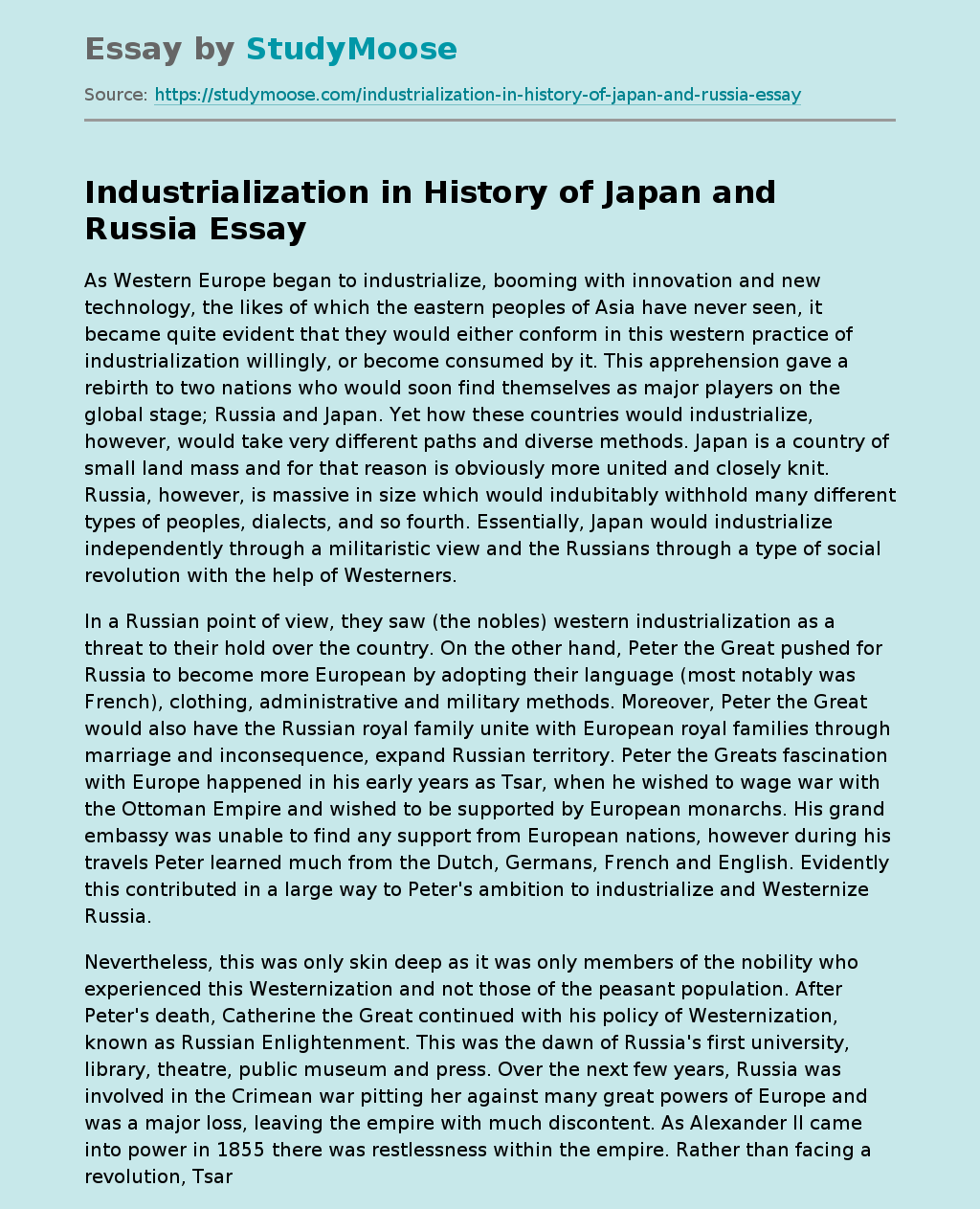