The industrial revolution was an era of mechanization. During this era, in 1854, Charles Dickens (1812-1870) wrote Hard Times to comment upon the change within society and its effect on its people. Dickens points out the flaws and limitations of this new society in his eloquent and passionate plea on behalf of the working poor (Charles Dickens Hard Times, 2000). The novel shows presents to readers the authors perspective of life during the nineteenth century and makes comments on the central theme of fact versus fancy.

Don’t waste time
Get a verified expert to help you with Industrialization in “Hard Times” by Charles Dickens
Hire verified expert
$35.80 for a 2-page paper

Due to this theme, the novel ends with many characters realising that a person needs more than just fact in their life. The novel examines the utilitarian system through various characters such as Tom, who has been brought up in the utilitarian education system. Dickens exposes his own views on this system through Sissy Jupe, the uneducated daughter of a circus master, and the positive influence she has on the Gradgrind family.

Thomas Gradgrind has a strong rationalist philosophy and believes that fact, and fact alone is the one thing needful but through the satirical way Thomas Gradgrind is described, Dickens makes his own comments regarding his conflicting views of this philosophy.

Dickens introduces Mr Gradgrind as Thomas Gradgrind, sir. A man of realities. A man of fact and calculationswith a rule and a pair of scales, and multiplication table always in his pocket, sir, ready to weigh and measure and parcel of human nature (p48). This portrays Gradgrind as a man who places a numerical value on everything and does not believe in anything other than black and white fact.

Gradgrind is described with a satirical tone which signifies that Dickens is mocking Gradgrind and the system which he believes in.

Dickens ridicules Gradgrind through his use of sarcasm against him. This is shown when Dickens says You might hope to get some other nonsensical belief into the head of George Gradgrind, or Augustus Gradgrind, or John Gradgrind (all suppositious, non-existent persons), but into the head of Thomas Gradgrind no sir (p48) The no sir is an intrusion of the authors voice which, in a condescending tone, ridicules Thomas Gradgrinds strong belief in the utilitarian system. Through Mr Gradgrind, Dickens ridicules the system and it is evident that Dickens disagrees with it.

Tom is a product of the utilitarian system and Dickens uses him to convey his own opinions of the system. Tom was brought up by his father under a system that allowed room for nothing but fact (p47). He was not exposed to any emotion and as a result he did not develop any decent morals. He was taught to value fact alone whilst remaining ignorant of compassion. His callous nature is evident when he positions Steven Blackpool to be falsely accused of robbing the bank. Tom instructs Steven to just hang about the bank an hour or so (p191) and soon afterwards Tom goes ahead with the robbery. As a result of Toms instructions, the citizens blame Steven for robbing the bank as he was seen hanging about the bank just before the robbery. This incident reveals Toms deceitful nature due to the fact he is mercilessly able to let his fellow worker take the blame for his crime.

It also signifies that even thought Tom was brought up in a system that was believed to be infallible; this utilitarian system did not teach him other more important things such as how to be a good person. Another example that reveals Toms cunningness is when Tom decides to visit Louisa after having ignored her for a long period of time. The only reason Tom does this is because he is aware that Mr Bounderby has proposed to Louisa and he wants to ensure that she accepts his proposal as this will increase his earnings at Mr Bounderbys bank. Tom says to Louisa Has father said anything particular to you, today or yesterday, Loo? then her brother glanced at her face with greater interest than usual, and, encircling her waist with his arm, drew her coaxingly to him (p130).

The way Tom treats Louisa indicates that he only shows interest in his sister when he has something to gain from it. His actions are manipulative when he coaxingly brings her towards him. This shows that, even though Tom has been provided with what was believed to be the finest education, ad has learnt every Ology, he is still extremely selfish and uses people to his own will and benefit. Tom has turned out to be a very corrupt man and, being a product of the utilitarian system, Dickens uses Tom to declare that this system does not work.

The girl was so dark eyed and dark haired, that she seemed to receive a deeper and more lustrous colour from the sun when it shone upon her, the boy was so light eyed and light haired that the self-same rays appeared to draw out of him what little colour he ever possessed (p50).

This passage is significant because it reveals Dickens opinion of the utilitarian system. It is no coincident that Bitzer, the boy who was educated under the system of fact has been described as colourless while Sissy, the poor and uneducated girl, has been described as lustrous. The colour symbolises the fancy while the paleness represents the fact and through the above passage Dickens states that Bitzer is being filled with so much fact that it is draining all the fancy out of him. Sissy, on the other hand, has not been educated and filled with fact therefore she has been characterised as dark and full of colour.

Another example that epitomises Dickens use of colour to represent goodness is when Sissy is revealing to Louisa that she never once envied her. She says I had nothing to complain of, and was not at all hurt (p148). This demonstrates Sissys unpretentious nature and the author believes this is a respectable quality to possess which he highlights by saying Her colour rose as she said it modestly and hurriedly(p148). This shows that Dickens has used colour to represent kindness whilst a lack of colour, such as that describing Bitzer, to highlight the negative outcomes of the system.

Through Sissys influence on the Gradgrind family Dickens presents the idea that there is another thing needful than just fact. Another critique, David Craig, also agrees that Dickens conveys is opinions his views on the utilitarian system through inspection of the Gradgrind family. Hard Times is increasingly taken over by an examination of the family, showing how damaging and limiting an upbringing which allows no place for imagination and fancy can be. The effect Sissy has on the Gradgrinds is shown through the way the characters change throughout the novel. For example, at the beginning of the novel Louisa is unable to express her emotions because even if she does try she is told not to. Later in the novel when Louisa becomes ill Sissy spends considerable amounts of time with her. This gives Louisa an opportunity to learn about love and compassion. This is evident when Louisa cries out Forgive me, pity me, help me! Have compassion on my great need, and let me lay this head of mine upon a loving heart.

This speech by Louisa is very different to anything said by her earlier in the novel. It is an outburst of emotion and there is evidence of expression which Dickens has indicated through the use of exclamation marks. Another incident that epitomises Sissys kindness, and the consequence this has, is the speech given by Mrs Gradgrind preceding her death. She tells Louisa You learnt a great deal, LouisaOlogies of all kinds, from morning to nightbut there is something not an Ology at all that your father has missed, or forgotten, Louisa I dont know what it is.

I have often sat with Sissy near me, and thought about it (p225). Sissys presence is noteworthy because it indicates that Sissy inspires Mrs Gradgrinds emotional being, something that the Gradgrinds were never exposed to before. It shows that Sissy possess a certain touch of humanity that not even the most fact-filled person could provide or teach. Through this Dickens states that even though Sissy has not been educated, she has much to offer to the world; she has more than what Mr Gradgrind could ever have taught his children.

Charles Dickens lived during the industrial revolution, an era ruled by utilitarianism. His knowledge of the system as well as his personal opinion is revealed in Hard Times through the characterisation of the Gradgrind family, Sissy Jupe and Bitzer. Mr Gradgrind believes that fact is one and only thing you need whilst Sissy believes there is more to life than fact. Throughout the novel these two philosophies are compared and as an end result readers are positioned to believe, through techniques of characterisation and symbolism used by Dickens, that fancy is just as important as fact. Dickens states that a person without fancy cannot possess the goodness and modesty present within Sissy and that even the most intelligent person who knows all their Ologies cannot be a moral person if they do not nourish their emotion and imagination. 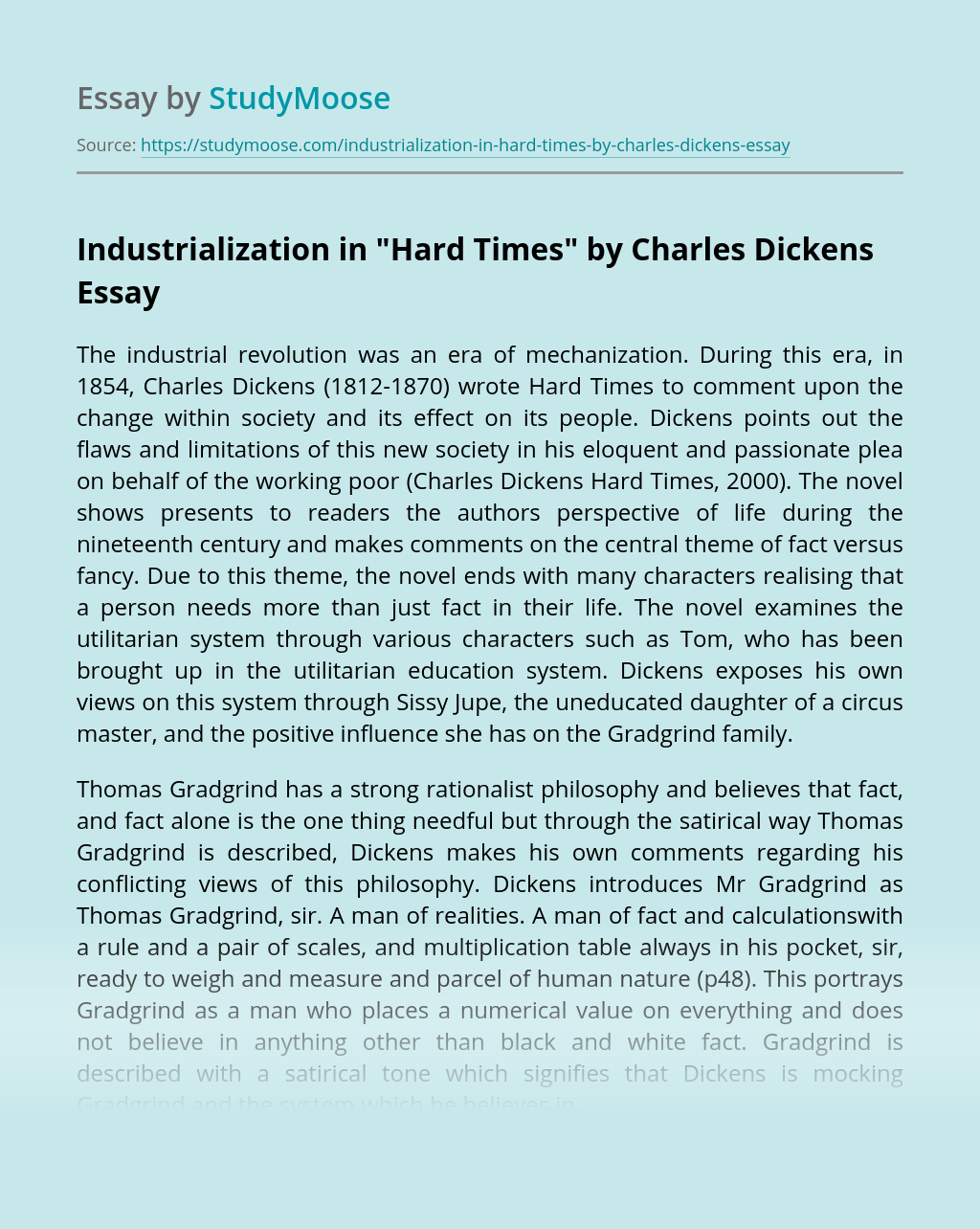 Don’t waste time
Get a verified expert to help you with Industrialization in “Hard Times” by Charles Dickens
Hire verified expert
$35.80 for a 2-page paper
Stay Safe, Stay Original